Spring is coming round, days are longer, flowers start to grow and… hay fever strikes once again! Hopefully these natural ways to relieve hay fever will help you. 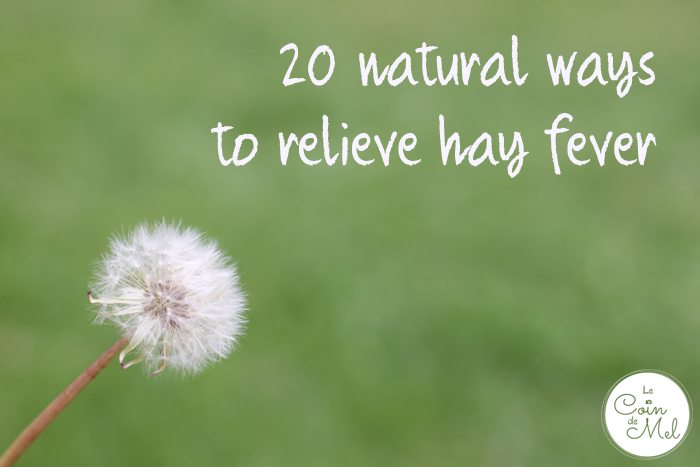 I really thought I had had a lucky escape with hay fever this year; I was almost smug that my natural remedies had worked better than antihistamines had ever done. Well, that was until a couple of weeks ago when we stopped at Stonehenge on our way back from Devon and it started; just like that. One of my eyes was so puffy when we got home I could barely open it…


The worst about hay fever is it always coincides with the weather perking up. You are keen to spend more time outdoors but end up locking yourself in the house with all windows closed to try and ease the symptoms.

Strangely enough, I did not suffer from hay fever before I got pregnant with Beanie four years ago. It was at its worst when I was expecting Jumpy and I spent most of my pregnancy with sinusitis.

Crevette has no health issues whatsoever, and a very strong immune system it seems as he rarely gets sick. Beanie has eczema. Jumpy also has the skin condition as well as a wide range of allergies. It is a coincidence? It makes you wonder, doesn’t it?

Seasonal Allergic Rhinitis, or hay fever, is caused by pollen.

For some reason, whenever I go past Crevette’s school gates, I am in floods of tears and sneezing uncontrollably. I have no idea what causes it. It might be a tree, grass or flowers they have there. This morning, I tried the other school entrance, but it was the same. I started sneezing and sniffling as soon as I went past the gates.

I would normally have antihistamines every day for spring and summer, but this time, I decided not to have anything during my pregnancy. Jumpy has so many allergies; intolerances and such bad eczema that I cannot help thinking it might have something to do with the stuff I took whilst I was expecting her.

I have no medical knowledge or qualifications and I do not have a cure for hay fever, but I thought I could not possibly be the only one out there trying to feel better despite the high pollen count. After all, According to Allergy UK (April 2014), there are “18 Million Hay Fever Sufferers in the UK” (18 million!).

After thinking about what helps me, asking friends for tips and doing some research on the NHS Choices website, Allergy UK and a few other sources, I compiled a list of natural ways to relieve hay fever symptoms.

Please do not take my word for granted, and consult your doctor if you are struggling to control the symptoms of hay fever.

1) 1 teaspoon of local honey every morning
2) Saline nasal spray
3) Saline water used as eye wash
4) A dab of Vaseline or Haymax at the entrance of your nostrils to trap pollen
5) Nettle tea or capsules – natural antihistamine that could help reduce sneezing and itching
6) When out, wear sunglasses: the bigger, the better
7) Shower just before bed to remove all pollen from your hair and skin
8) Avoid opening windows at night
9) A large bowl of boiling water by your bed with a few drops of Olbas oil should help relieve congestion
10) Cucumber slices on your eyes
11) Reduce your intake of dairy products as they tend to increase the production of mucus
12) Take vitamin C supplements every day
13) Dry clothes and bedding indoors. Pollen can stick to clothes hanging in the fresh air to dry.
14) Do not have fresh flowers in the house
15) Remember that pets will bring pollen into the house
16) Do not cut the grass
17) Vacuum your house regularly
18) Dust using a wet cloth
19) Try reflexology
20) Last but not least, get away from pollen! According to an old BBC news article, “hay fever free zones” include Finland, Thailand, Trinidad, the Seychelles, Stockholm and anywhere in the French Alps. I am definitely up for the French Alps!

Have you got any other tips or natural ways to relieve hay fever symptoms without using antihistamines?

Adopt a Cow with …

A Sleepover on the …

Almond Granola with no …