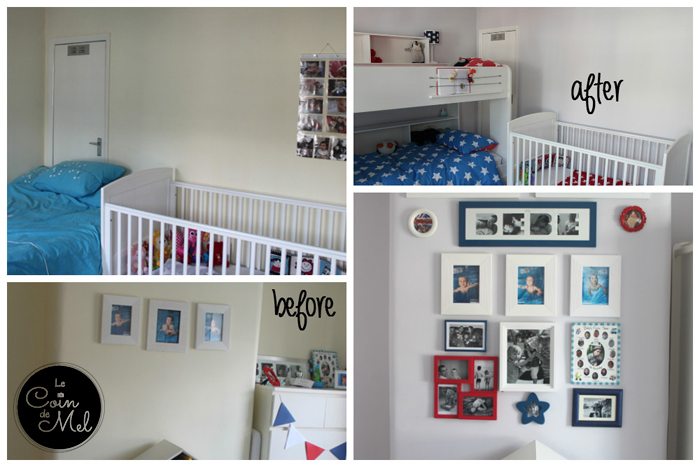 I just love my home! It is far from being perfect, do not get me wrong! It is old, tiny, has a slight lingering smell of damp in the front room, a painstakingly open-plan en-suite bathroom (no privacy whatsoever in there!) and a garden which could fit in a shoe box. It is not remotely energy efficient and only has two bedrooms, but I would not change it for the world as it is our little nest, the place where we make our family memories…

When we moved in just over five years ago, it was just hubby and I. The house seemed huge for the two of us and my growing bump. It was pretty empty, too, and all we had in our bedroom was our mattress on the floor. Talk about bare…

A few years down the line, and the family has grown (ever so slightly!), and the house has filled up exponentially… Crevette was born in 2008, followed by Beanie in 2010, and without fail, two years later came Jumpy. The family has expanded and we have accumulated quite a lot of stuff, but the house has stayed the same.

Just like I keep telling myself (and anyone who will listen) that my beloved old Mini is a family car, I am convinced my home is a decent-sized family home. Am I kidding myself? I think not… I always try to make it look like it is spacious (mostly when cramming stuff in cupboards when friends come around) despite the five messy human beings living in there, and a few months ago, I decided it was time to do something about the children’s bedroom as it was no longer fitting my little house-rule.

We never really did the pretty nursery thing. We just casually added a chest of drawers, cot-bed and a few frames to the spare bedroom that had a double bed in for our guests and voilà, we got ourselves a nursery for Crevette!  As Beanie and Jumpy came into our lives and moved in to the bedroom, we just added more furniture to fit them in, but still changed nothing. 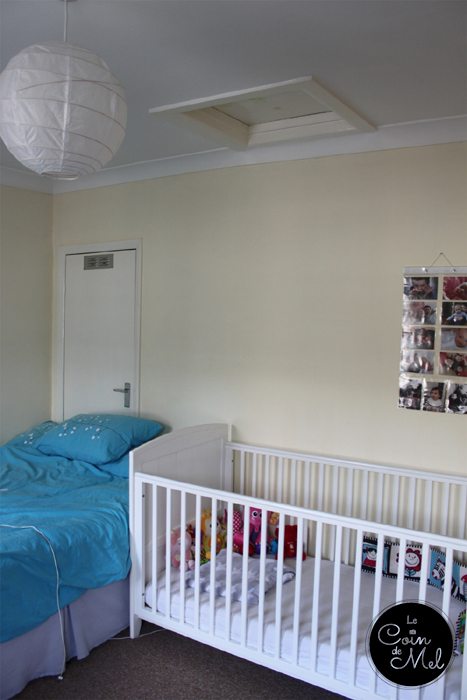 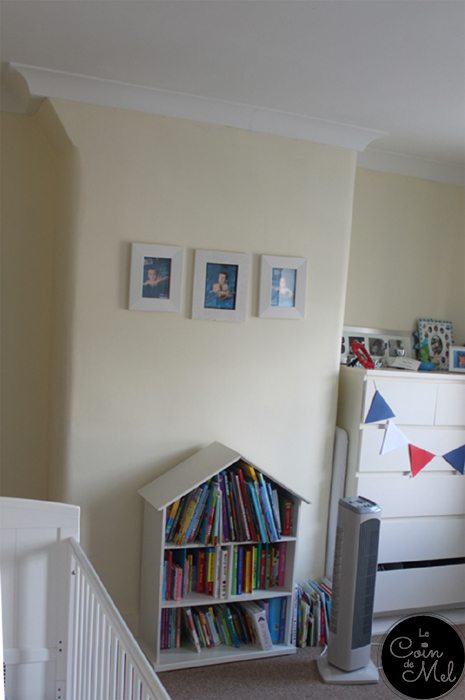 Bunk beds have been at the back of my mind for quite a long time now, but hubby was adamant we did not need them. I know that… who needs anything? We could just sit on the floor rather than a sofa and live on food we pick up in the woods rather than go to a supermarket, but realistically, we would rather sit comfortably and eat well. His killer argument was that those kinds of beds were dangerous and Crevette could fall and really hurt himself… He had me there, and it is true that on their catalogues, companies advise that whoever sleeps on the top bunk should be six years old or over. Last year, I found one bed that had a lower top bunk (quite deep, too) than any others, and actual stairs as opposed to a ladder. I made up my mind that it was the bed we needed for Crevette and Beanie, and they loved it, too! Hubby was not budging, but he never does, and I got the bed a few months ago. 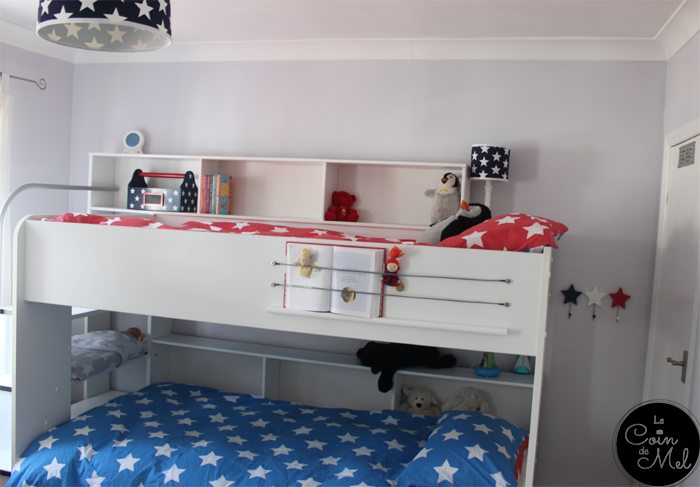 It took a lot of thought and effort to coordinate everything.

We kept the carpet as it was but went for a calming light grey paint for the walls. For frames, duvet sets and new things we bought for the bedroom, we chose to go for bold blue, white and red, which we thought worked for a mixed room, and they happen to be the colours for both the Union Jack and the French flag (double whammy!).

The furniture was mostly white, and Crevette already had a ukulele in blue, red and white in the bedroom, and two of the piggy banks were in those colours as well. 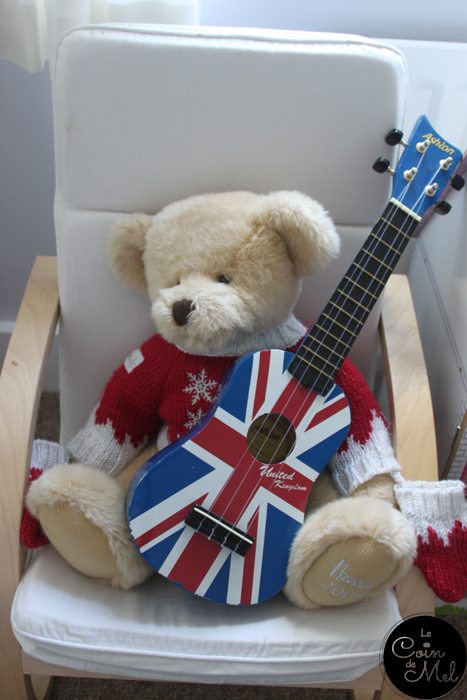 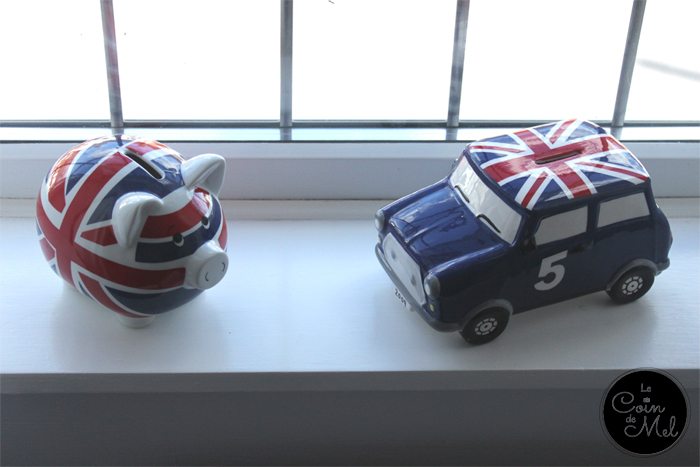 We also went for a star pattern on a few items. 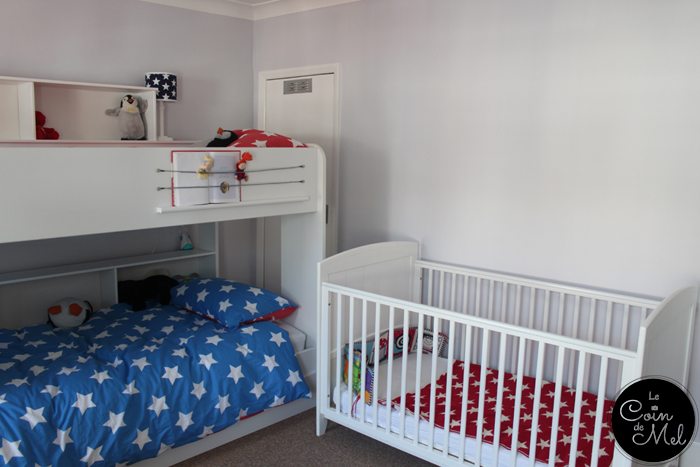 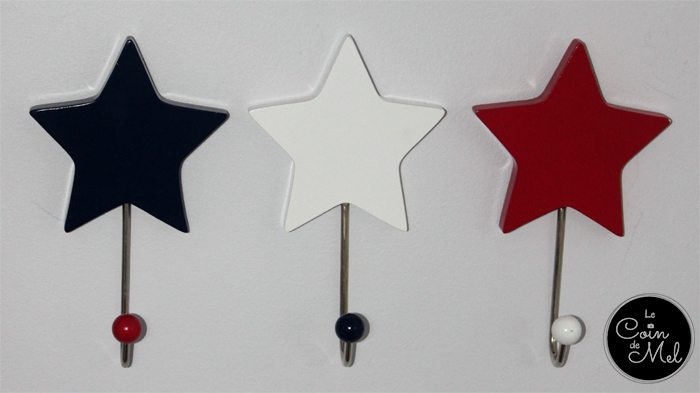 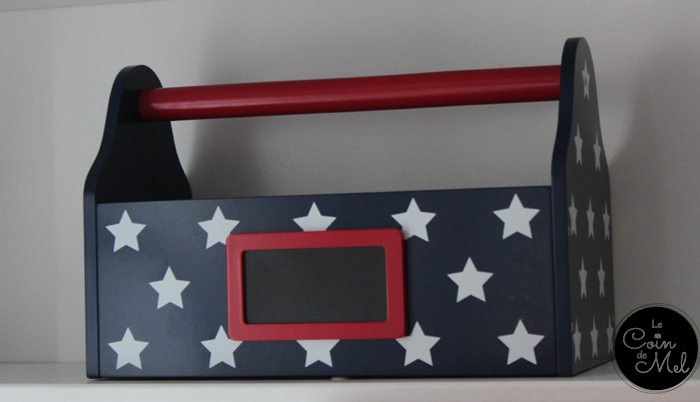 … and I could not help getting that pretty box for storing warm cuddly blankets. 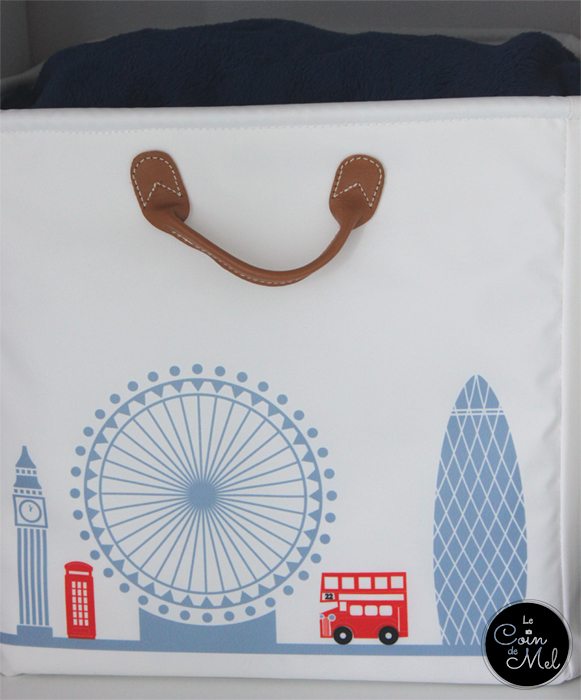 Planning the wall of pictures with a range of eclectic frames in our chosen colours was a lot of fun. As I could not find any blue frames anywhere, I just sanded and spray painted a few silver and white ones I had at home. 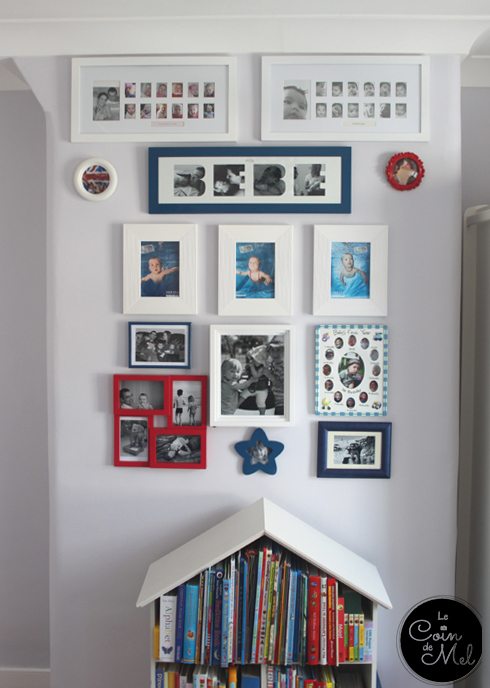 I also made a magnetic board for the children so we can change the invitations and pictures they want to display whenever they want to. 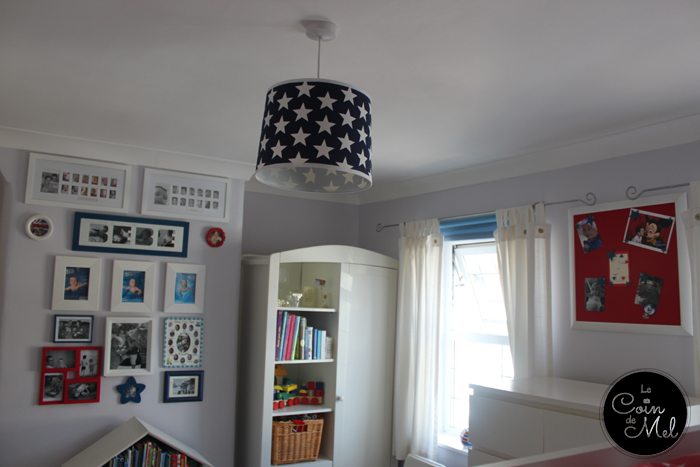 Under the stairs there is quite a lot of storage for the children’s toys, and we kept a shelf free to be used as a doll’s bed, which Beanie loves. 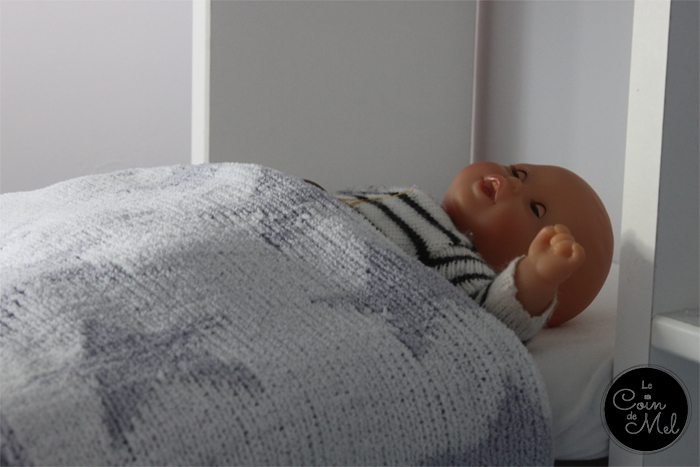 The room now looks more spacious, and the children have their own personal space, which is lovely. 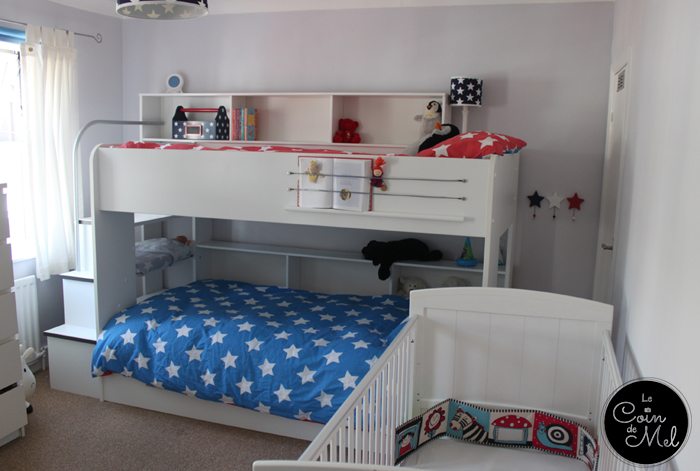 As the transformation was under way, I did not let the little ones in the room, so when it was all finished and absolutely perfect, I went in there, video camera in hand and I let them in. They were speechless one minute, bouncing around the next, and everything in the room made them squeal with delight. They could not stop giggle. That was a truly magic moment for us.