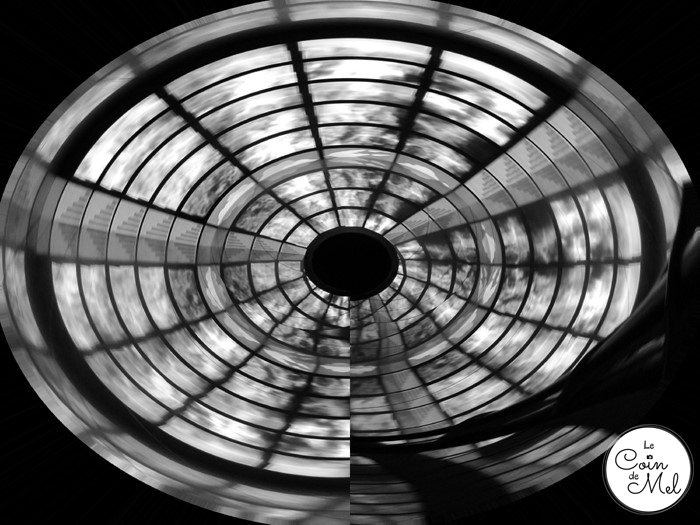 Everything has been a bit of a blur in the past few days. It started on Monday as I felt nauseous after dinner. I ended up going to bed at the same time as the children as I could barely stand up. I felt drunk even though I had not had any alcohol. All night, Hubby passed me Wriggly whenever she needed milk, then he changed her nappy and put her back to bed after each feed. My body was there but my head was not…

Luckily, on Tuesday, hubby had a day off for paternity leave and he took charge of the whole morning routine with Crevette, Beanie and Jumpy, taking our little man to school and then going to playgroup with the girls. When they got home around lunchtime, I had managed to get dressed and go downstairs with Wriggly. I felt relieved that the dizziness had been temporary.

On Wednesday morning, I started feeling unsteady again, but dismissed it as I assumed I had not eaten enough or was simply worried at the prospect of spending the day in South Kensington to sort out Wriggly’s French birth certificate and papers. It was after all my first time out in Central London with my newborn baby, and I was not too keen, as she was just over two weeks old. Nonetheless, it had to be done as we are off to France in August, and with no passport or identity card for Wriggly, we will not go through customs.

Going on that trek across London at rush hour was not a good idea. The train and tube journeys were surreal. Walking in the underground corridors, I felt disorientated and unstable. The floor was moving beneath me. With my left hand I was supporting Wriggly who was sleeping peacefully in the sling, and holding on to handrails or the walls with my right hand. Going down the stairs and escalators was terrifying as vertigo was kicking in.

We made it to the embassy for our appointment, but I was still dizzy and quite confused. After giving all the papers needed for Wriggly’s French birth certificate, we had a couple of hours to wait until I could apply for her passport and ID. We went to Carluccio’s where I had coffee and bread whilst feeding Wriggly and reading my book. I still did not feel right, and after I ordered an orange juice and more bread, I told the waiter I thought I was going to faint. He immediately called his manager, Fabio, who made sure someone was with Wriggly and I at all times from then on.

Another lovely member of staff, Vera, sat by my side and kept checking I was fine. At no point was I made to feel like I was a burden. Vera and Fabio just looked after me, seeking medical advice, reminding me to drink water, even coming with me to change Wriggly’s nappy. I lay down next to Wriggly on the leather seat and closed my eyes. It was the only position in which the world stopped spinning around me. They tried getting an ambulance to come and get me, but the emergency services were too busy for my mild symptoms, which was understandable. I still could not go anywhere or stand up on my own and kept repeating that I was going to miss my appointment at the embassy. There was no way I could go back there, even though it was only two minutes away from the restaurant. Hubby came all the way from home with our girls to pick us up and by 3 p.m., I was tucked up in bed.

I have been lethargic ever since and every time I have tried standing up, I have had to hold on to furniture and walls. On Thursday morning, just going down the stairs to open the front door for Crevette to walk to school with my friend Aimee was like a superhuman effort. Hubby came home from work around 12 p.m. because I was so drowsy I was worried I would not wake up for Wriggly, or find the strength to take her out of her bed to feed her. Hubby has been the best nurse anyone could wish for, juggling work, our four children, keeping me fed and hydrated.

He called my doctor for advice, and she offered to do a home visit, as she thought it was out of character for me to be bedridden. I love my doctor! She was with us within the hour and quickly diagnosed that I was suffering from labyrinthitis, an inner ear infection which affects your balance. I had never heard of it and it sounded really whacky to me, from the symptoms that disappear as soon as you lie down (hence this post, written in bed), to the name the condition has been given, to the fact the symptoms should disappear spontaneously within a few weeks (yes, weeks!)! When I asked her what could have caused it, she explained that it was most likely to be viral, or could be linked to allergies. Could that hay fever that has been plaguing me for the past few weeks be responsible?

Here is a good tip from my lovely doctor. You can find information about medical conditions as well as a symptom checker on the following website: www.patient.co.uk. It provides health professionals with articles written by doctors as well as less technical leaflets on conditions for the general public.