Today is Wriggly’s due date. As everyone knows, it is rare for babies to be born on their due date, and none of my babies were. In fact, they were all late. Crevette came two days after the date I had been given as a guide, Beanie five and Jumpy nine.

You can imagine my surprise when I started getting strong, regular contractions all night on Sunday. As my last labour had lasted days, I did not wake Hubby up and just focused on my breathing, the mantra from my hypnotherapy tracks and visualisations my friend Adeline had suggested a couple of days before. I was in pain but I felt I was coping pretty well, considering I would probably be giving birth a day or two later.

At 5.30 a.m. on Monday morning, hubby and I heard a popping sound, to realise that my waters had broken in bed. That was a first! With our three other children, the waters broke as I started pushing and in two cases, mere minutes before I gave birth. We were a bit stunned I have to say and neither of us really knew what to do.

Hubby went with his initial plan. He spoke to his dad and asked him to pack and drive up from Devon. He then called Cé, got her to pack bag and toddler to come and look after our three children. He then warned the hospital we would be there soon.

After he had spoken to Cé, things started happening quicker than ever before. I was in a lot of pain and quite reluctant to leave the toilet. I went in the bath at around 7 a.m. to try and slow labour down, but I soon felt the urge to push.

Hubby, who knows I like to be left alone with the pain, did not bother me too much and stayed downstairs with the children. As I knew I was not going anywhere, I made that mad decision I was going to deliver Wriggly on my own in the bath. I kept talking to her and telling her it would all be fine. Luckily, hubby sent Cé up (much to my annoyance at the time) and she ran downstairs telling him to call for an ambulance straight away.

The bath was slippery and nothing like a birthing pool. It was not wide or deep enough and what I was trying to do was probably dangerous so with hindsight, I am glad the paramedics arrived, even though at the time, I was irritated by their sheer presence, constant chatter and silly questions. If I remember well, I cried when they told me I could not stay in the bath. I insisted I did not think I could give birth out of water… They were really patient with me.

A couple of midwives arrived, with strict orders to close all windows, put the heating on and get towels warm for the baby (I thought they only did that on TV!). I leaned on the bath and looked longingly at the water whist listening to hubby’s encouraging words and the midwives’ advice. Ten minutes later, Wriggly was born, a healthy 3.4 kg little girl, bringing joy to our family one day early.

We stayed at home; the children were over the moon to meet their little sister. We had tea in our own cups, lovely toast and jam and I spent the morning chatting with Cé before beau-papa (hubby’s dad) arrived for more cups of tea and chats. Holding a newborn baby has such a calming effect… No more panic in this house, just peace and happiness. 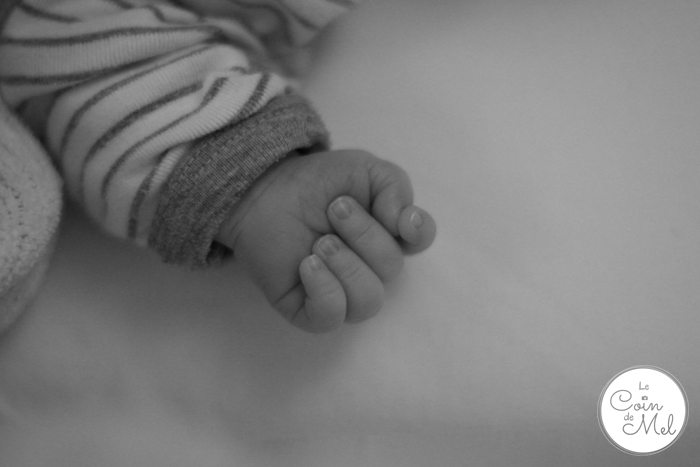