If you have been following my ramblings, you might remember that Crevette decided to have a French theme for his fifth birthday party. After sending the invitations we had designed together, we started thinking about the food.

The party was going to be at home and as we were expecting about twenty-five people in our small house, we thought it would be a good idea to have a buffet, just to make sure nobody would go hungry or thirsty. That way, guests could just help themselves to whatever they wanted whenever they wanted it.

It was the hottest day we have had in the past few years and we had plenty of drinks available: tea, French coffee, Evian water, squash, juice, lemonade, French beer and wine.

I had made mini French flag tooth picks and little labels in French and English so that people would not have to guess what they were eating. It also made it easier for those on restricted diets. I did not think of taking photos of the buffet, but you get the idea. I will be tweaking and sharing some of the recipes in the next few months. Some of them are already on the blog. Feel free to click on the links and try them!

The macarons were what my little man wanted most and it took me quite a few attempts to get them right. Luckily, the little treats can be frozen so I made them ahead and we ate the failed attempts for a whole month before the party. They tasted just right but had the wrong colour or did not rise as much as they should have. 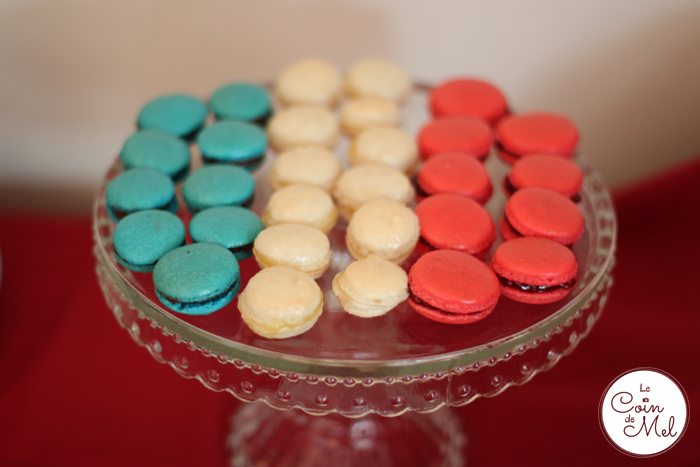 The blue macarons were filled with chocolate ganache, the white ones lemon curd and the red ones raspberry jam. There was not a single one left! My macarons are in no way perfect, but they taste great (to us at least!) and I now make them for each and every family occasion. 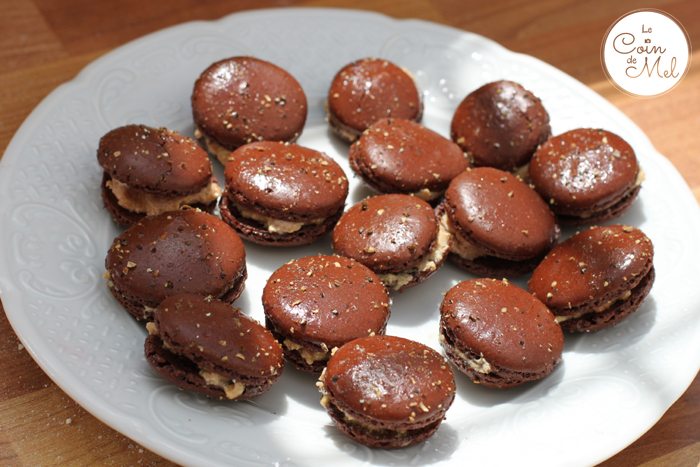 Macarons surprise (pas végétariens!) (Guess what is in the macarons… Not suitable for vegetarians!)

I made sweet and sour macarons (bitter chocolate and foie gras) as well but it was a very hot day and the foie gras could have done with a couple of hours in the fridge beforehand. The gingerbread topped with foie gras (‘Foie gras sur pain d’épices’) was much more of a success with our guests.

We could not have a French party without cheese and bread, so we obviously had: 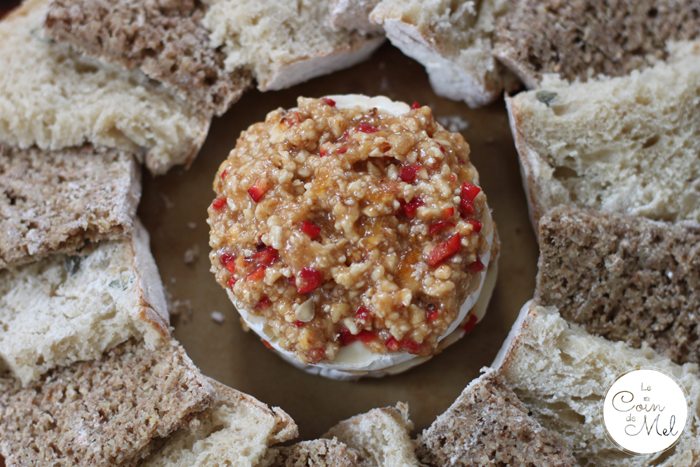 The ‘camembert rôti’ (Baked camembert) is something I make whenever we have guests coming as it is a simple dish that is great to share. I will be writing a post about that recipe soon! The salmon tartlets were a hit with all the adults and most of the children (‘Tartelettes au Saumon’). 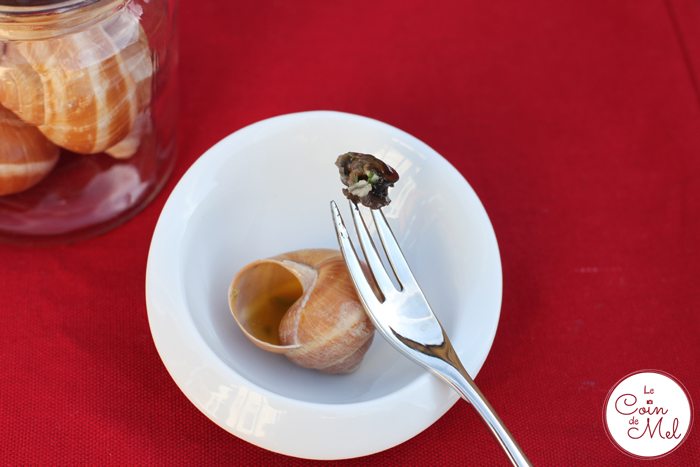 Crevette was desperate to try snails so I asked Catherine, my friend Cé’s mum for advice and she got me some cooked snails I just had to stuff in shells with garlic butter. I have to say I was surprised that all adults tried them and a few of the children did, too! Crevette absolutely loved them and finished the remaining ones the following day. 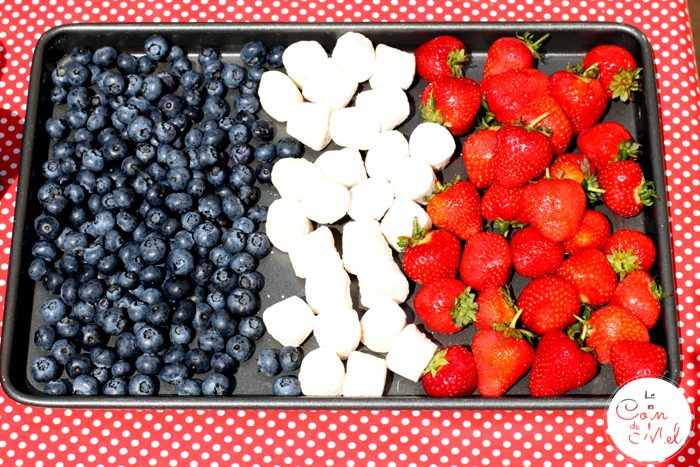 I had seen some pretty fruit skewers on Pinterest made for Independence Day (same colours as the French flag!) so I had planned to do the same thing, but I ran out of time and ended up putting the fruit and marshmallows on a baking tray. 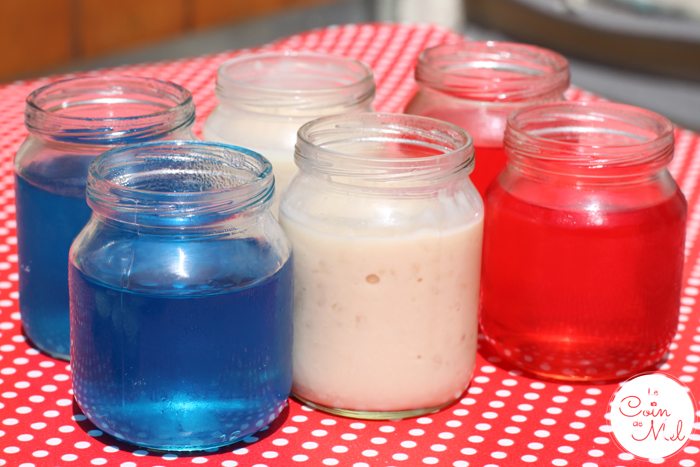 Mea Culpa, jelly is definitely not French, but Jumpy can have it so we have it for parties! When you have a child with allergies, you are allowed this kind of ‘faux pas’, aren’t you? I have to say having them in baby jars was the best idea I have had in years (if I might say so myself). It made it really easy to store the jelly in the fridge and serve it. I shall be doing that again! 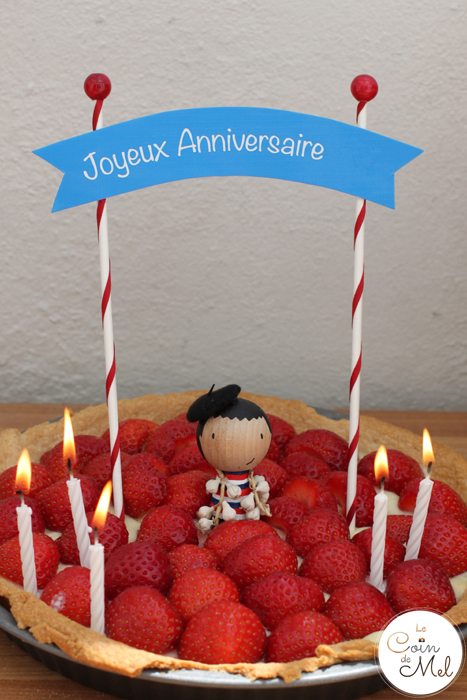 Cé, who is also Crevette’s godmother, made the cake for him and as he loves strawberries, she went for a ‘Tarte aux Fraises’ recipe that had caught her eye on one of her friends’ blogs. It was an impressive strawberry tart and if you can read French, I would highly recommend the recipe and as a matter of fact, all the delicious food Eva creates (click here for Eva’s mouth-watering blog: Ça Croustille).

The cake topper (it really looks like Crevette!) and banner were made by my friend Esther who designs stunning  personalised hand painted wooden cake topper dolls at Peg it Dolls.  Esther is incredibly creative and talented, so if you do not want to be tempted to get her to personalise a tooth fairy, birthday cake topper or mini Elsa for you, save yourself the temptation and do not click on the link!

Here are the other nibbles we had on the table, just in case you are looking for ideas for party food:

Are there any other nibbles you would have included in your French buffet?