Last week, my brother and his girlfriend stayed with us, much to everyone’s delight. As Crevette (6 years 4 months) and Beanie (4 years 3 months) were getting restless on Friday afternoon, I decided to give them a challenge. They love getting involved in the kitchen and I find it important to encourage them to experiment with different flavours and textures so they do not become fussy.

I put a lot fruit on the table and told them they would be taking part in a competition. They could use any of the fruit in front of them to create their own smoothie recipe. Once made, we would taste them and I would publish the best one on my blog. 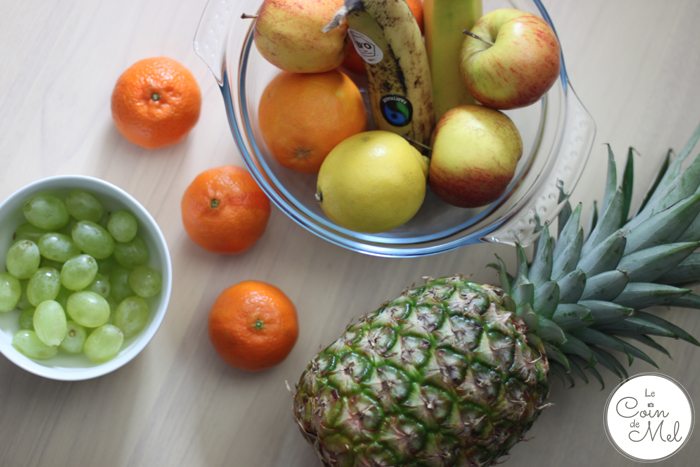 Excitement was palpable as they started choosing ingredients for their vitamin-filled drinks. Crevette wrote his recipe himself, and I wrote on behalf of Beanie. 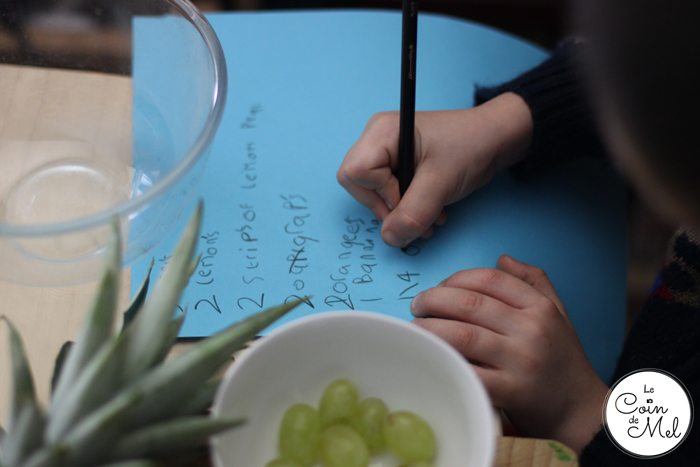 After that, they prepped their fruit, peeling, 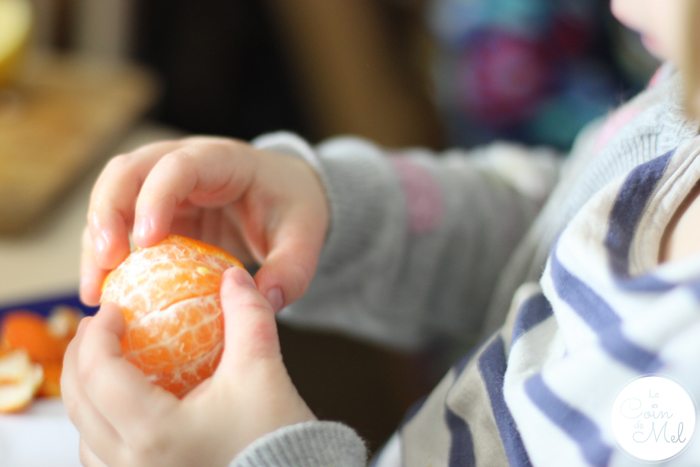 coring and chopping with their child friendly knives. 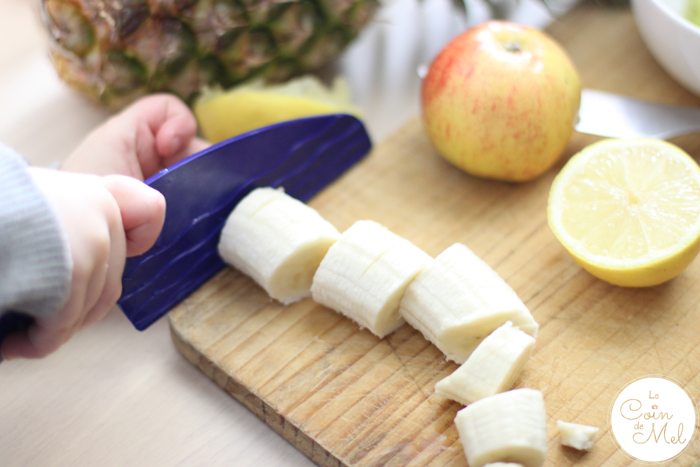 Beanie had lots of fun using some plastic animals to take her fruit slices to our Vitamix blender bowl. 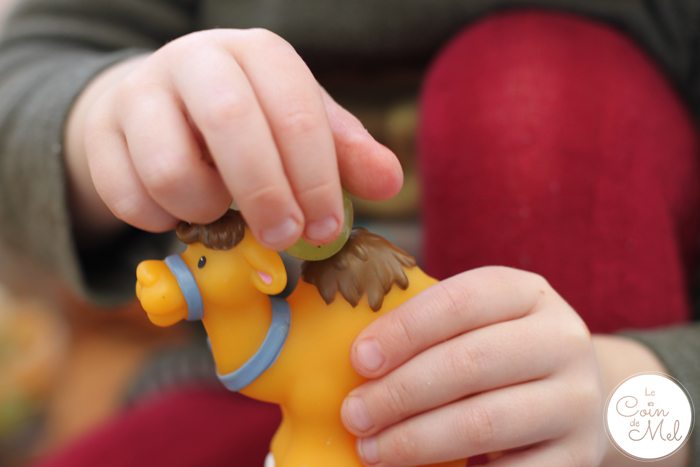 It took ages but she really enjoyed herself! 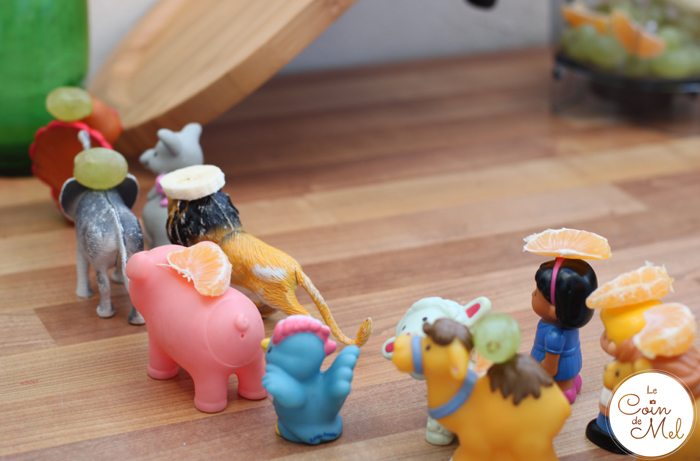 The elephant did a good job, too! 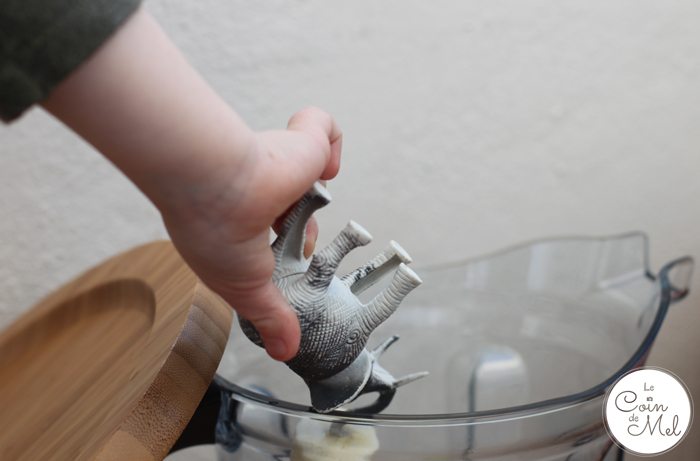 So that they would not be tempted to vote for their own smoothie, I put the fruity liquid in two glasses, one with a red straw, and the other with a black one. Everyone voted for the black straw, Beanie’s. 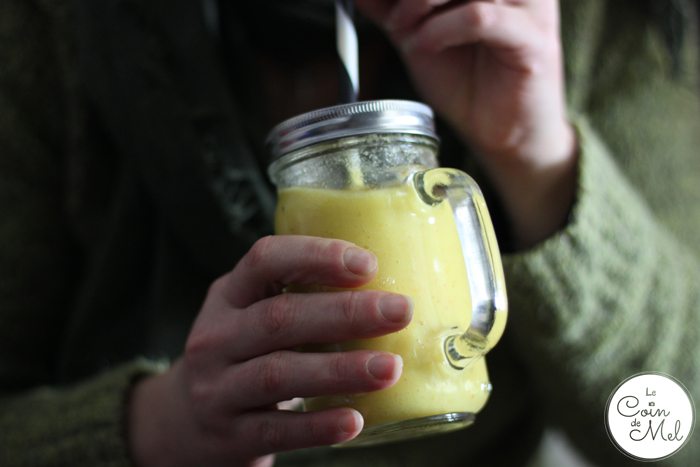 Here is her recipe:

Crevette was incredibly disappointed but after a good chat, he came up with ways he would improve his smoothie should he make it again. He would peel the oranges and reduce the quantities (his made a litre of smoothie!).

The following day, as I was shopping, I spotted discounted strawberries and cherries. Although they are out of season, the offer was too good to resist and I thought the little ones could make smoothies again. This time, Crevette’s one was deemed the best, by one vote.

My little man is always really sensible when helping in the kitchen. He is aware that he must not go anywhere near the oven, hob or sharp knives, and he generally tries not to be too messy.

When I told him I had downloaded a new app that for him to play with food virtually on my iPad this morning, he was delighted! He used Toca Kitchen 2 for just over half an hour and loved every minute of it! The app lets you choose a character. You can take what you want out of the fridge and feed them. You can also prep the food by chopping it, cooking it, blending it or boiling it. The game is intuitive and Crevette figured out what he could do within less than a minute.

To start with, Crevette chose to chop carrots and he had fun getting the slices to fly around the kitchen before feeding them to a girl. He then boiled bread, made pear and pineapple smoothie. He enjoyed trying to feed the characters odd concoctions and when one of them started sneezing, Crevette wondered whether the man might be allergic to one of the ingredients he used in his blended roast chicken.

Being allowed to do weird things in the virtual kitchen really appealed to Crevette, and he particularly enjoyed tricking the characters into eating something they did not like. If they refused to eat them in their raw form, he was chopping, cooking, blending and offering them again, always successfully. He tried generating a reaction, and causing spitting out, burps or a disgusted face.

Crevette absolutely loved the game. As a parent, I think there should be incentives, such as a limited amount of food in the fridge, and a points system to refill it as they complete tasks increasing in difficulty. In my view, the app could also be improved further by being educational as well as entertaining. Children could be given tasks such as making a roast, a curry or a smoothie and earn credit to allow them to move on to the next recipe or to a fun game.

If you want some inspiration to have fun with children in the kitchen, have a look at Toca Boca‘s recipes.

This post is sponsored by Toca Boca and Tots100.