Have you ever tried making gnocchi? It’s super easy to make and the kids will love getting their hands sticky while mixing the dough. It’s basically play dough, but you can eat it! Check this gnocchi recipe by My Little Sous Chef.

I first heard about My Little Sous Chef almost two years ago, when Caterina, Francesca and Laura were crowdfunding for their project. My Little Sous Chef is a tandem cookbook for parents and children to cook together. It’s unlike anything I’ve seen before.

It comes as a set of two cookbooks, which include the same recipes and work seamlessly together. The adult’s cookbook looks like any other recipe book, with detailed ingredients lists, instructions and good photos, whilst the children’s version focuses on simplified steps that children can follow to help make each recipe. The children’s version is laminated and easy to wipe clean.

I always find that when my children get fussy about food, the best way to help them overcome food aversions and pickiness is to get them cooking dinners with me. They tend to be a lot less reluctant to try something they’ve made themselves!

My Little Sous Chef is available here for £22.

Enough of my chit-chat. Over to you, ladies!

Tell us about you.

We are three friends, Caterina, Francesca and Laura. We wrote and produced an innovative cookbook, called My Little Sous-Chef. It’s conceived to encourage parents and kids to cook together and have fun creating yummy, healthy meals. We had this idea while reminiscing about helping our mothers or grannies in the kitchen and realise and realised there was no book that reflected that, so we made it!

Where do you find inspiration for your recipes?

A lot of our recipes come from our childhood, so the gnocchi for example, and the aubergine sandwiches; we also drew inspiration from London’s diverse culinary scene, but mainly we wanted to feature recipes that could offer kids a lot of tasks to get hands-on cooking.

Is there anything you would not touch even if you were given £1,000 to eat it?

Can you give us an anecdote about food?

Once we had people for dinner and we decided to cook spaghetti alla carbonara, which is usually a crowd pleaser and very simple: pancetta, egg and some parmesan cheese…only, the eggs are to be used raw (and super fresh, obviously!), and one of our guest didn’t know that. When he found out, he was very uncomfortable with the idea, but he mustered his courage and had a bite and loved it, so it was a success anyway.

What is your favourite way to share your recipes?

The best way is surely to cook for others and share a meal together. It’s fun to see their reaction when they take the first bite, especially if you know you nailed the recipe…if you are planning to feed them raw eggs though, give them a heads up!

Could you share a couple of tips that make your life easier in the kitchen?

When you try a new recipe, it’s quite helpful to read it a couple of times beforehand and visualise the different steps, so when you actually do it you will have it already memorised and it will flow more easily. Also, it’s always nice to have some music on.

1 thing no one should ever do in the kitchen?

There should be no rules in the kitchen, aside from the safety ones! Keep your kids away from the oven and have pan handles facing the inside and just have fun: feel free to experiment in the kitchen, combine flavours, swap one thing for another, taste everything!

This gnocchi recipe is easy peasy to make and ! It’s super easy to make and the kids will love getting their hands sticky while mixing the dough. It’s basically play dough, but you can eat it! 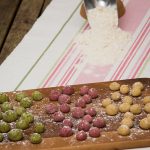 Tasks for your little sous chef:

Add the salt, egg and flour and knead.

Divide the dough into three bowls and set one aside.

Add pesto to the second bowl and tomato puree to the third one.

Roll the dough into long sausages on a chopping board.

Cut the sausages into little pieces

Disclosure: I was sent My Little Sous Chef for the purpose of this feature, but I wasn’t compensated in any way for this blog post. I genuinely believe in the concept behind My Little Sous Chef and think children should be involved in the kitchen every day!