This weekend has been all about food, friends and one-to-one time with my baby. A few weeks ago, when our friends from Nantes came to visit us, I booked train tickets for Wriggly and I on the spur of the moment.

Thursday afternoon saw Wriggly and I go on an epic train journey to the West coast of France. After taking her siblings to school and preschool, we got on the train. My little lady was on top form and entertained dozens (if not hundreds) of train-goers over London, on the Eurostar to Lille and then on the never-ending TGV (fast train) to Nantes, which was considerably delayed.

I had envisioned a very quiet journey with a sleepy baby and had planned to just relax and read, cuddling my sleepy tot. During her ‘awake time’ (who was I kidding?), I was picturing her playing quietly with her Farm in a Tin

(best toy ever!)  or cuddling her baby

Bwahaha, how could I have been this naive? Seriously now, is it just me who sees my children (in my head) as angelic cherubs, when to the rest of the world they are probably nothing other than a noisy bunch of kids?

The novelty of the journey, the trains themselves and the fact I was trying to keep my wriggly worm on my lap (we were sharing a seat) only made her more excited.

We must have walked ten miles or so up and down carriage after carriage. Between 1 p.m. and midnight, we took a taxi, three trains, a bus and finished in our friend Adeline’s car. Wriggly was excited. Not unruly excited, just happy excited. That was a good thing, but at times, she was loud and incredibly fidgety. Luckily, I had packed plenty of snacks and things to keep her entertained. 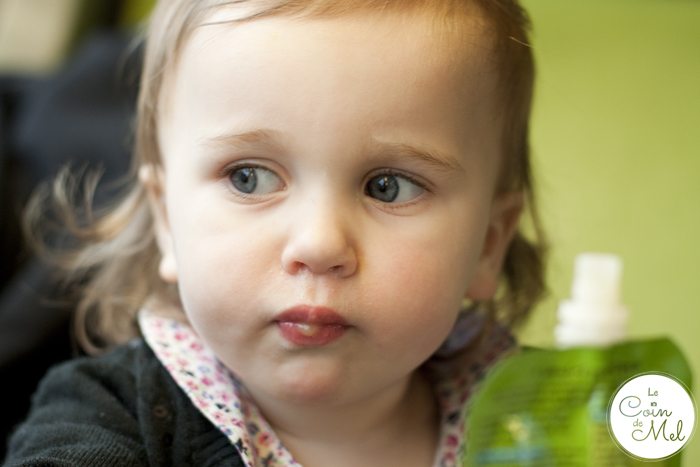 As you would anticipate, she fell asleep exactly one hour before the journey ended, and was ‘Little Miss Grumpy Pants’ when we got off the train. She was in full ‘awake’ mode when we got to our friends’ house just before 1 a.m. After a bottle of milk, we both fell asleep together on the sofa bed and slept like babies (if there is such a thing!).

After breakfast, our friends had to leave for work so we had the day to ourselves. We played, took out time, washed and went for a long walk to the bakery. 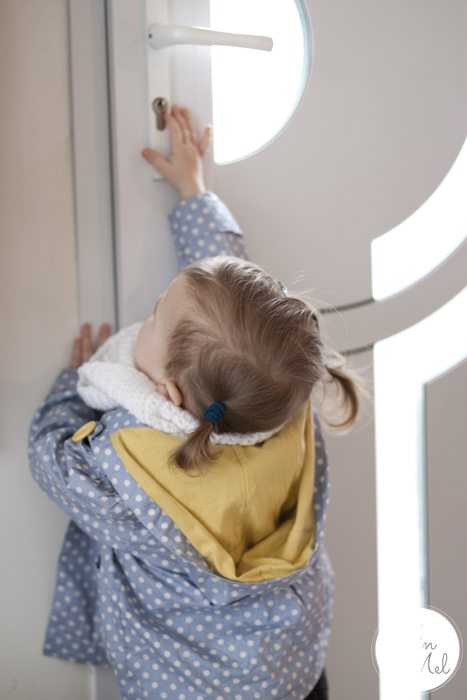 Wriggly loves walking and I did not have to carry her very much. We then ate lots of bread with butter and goats’ cheese lasagne. 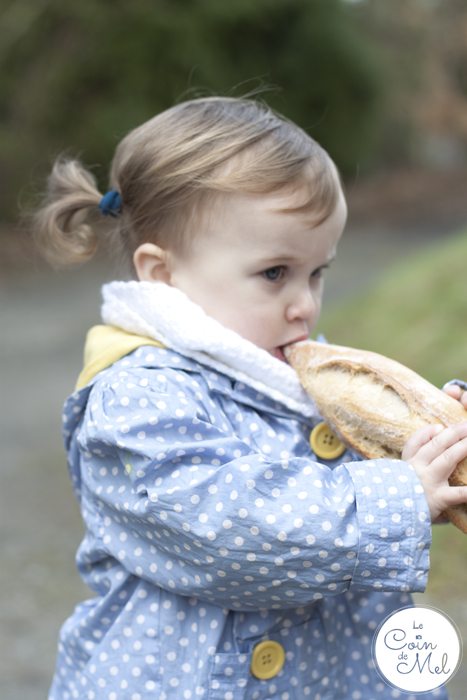 Baba slept for a whopping 4 hours and I got some work done before picking up Adeline’s little one from school, having brioche for snack all together and a play before dinner. Since it was Good Friday, we had cheese tartlets for dinner with salad and a yogurt.

On Saturday night, most people had arrived for the baptism and we all went to an Italian restaurant (Vaporetto) in Trentemoult-le-Port . Wriggly had roasted potatoes and ham, followed by ice cream. Had I seen the portions before, I would have suggested sharing with another little one. After a gorgeous goat’s cheese salad, I had the best café gourmand ever! My Instagram shot does not do it justice but there are times in life when you just have to tuck in rather than finding a great angle.

Just in case you are not sure what they are, cafés gourmands are a selection of miniature desserts served with coffee. In France, whenever you request coffee in a restaurant, you will get an espresso so if you would rather have something less strong, you can ask for a ‘café allongé’ (long coffee) but I still find you tend to get a double espresso when you ask for that, so I always ask for ‘café filtre’ (filter coffee) or a large cup with an espresso and boiling water so I can turn the espresso into coffee that is a lot more diluted.

Easter Sunday was also Adeline’s youngest baby’s baptism. She looked like a little angel (and behaved like one!) and I felt really happy to be a part of this celebration. 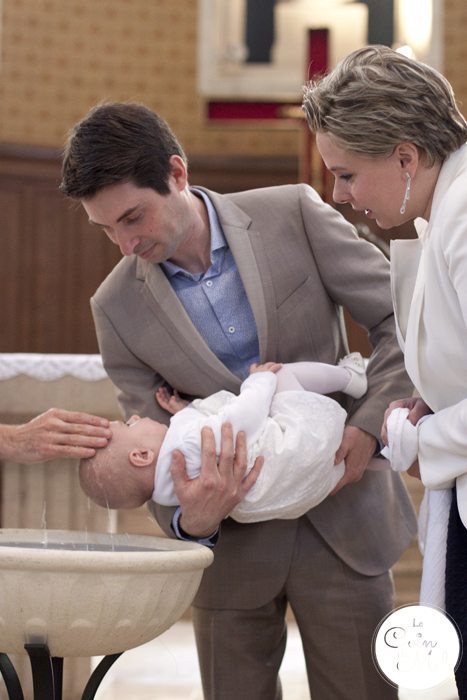 After mass, we headed to Brit Hotel, where lunch was taking place. Although she is already back at work (women tend to go back to work when their babies are 3 months old in France), Adeline had organised the whole event beautifully, with pink birds as the thread that was linking everything together. 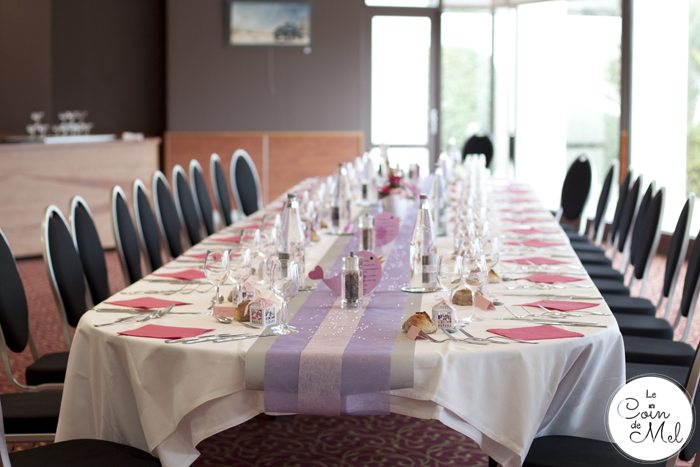 Champagne was served with salmon carpaccio and tapenade on toast. 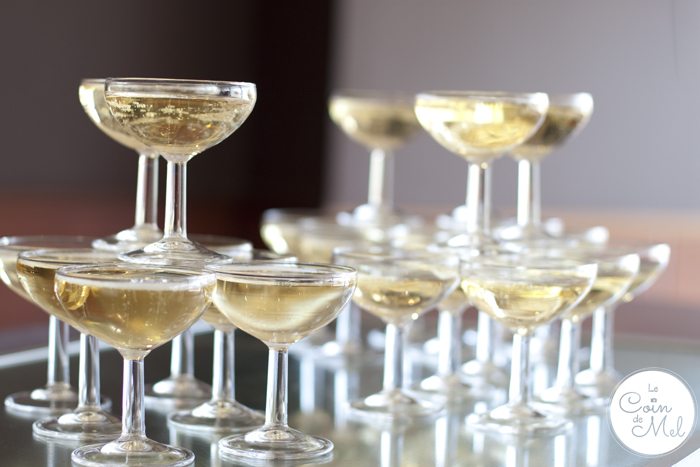 Children’s food was served first, as we were enjoying our appetiser. They had steak and chips, and Wriggly devoured her portion, although I would never have given her quite that much. 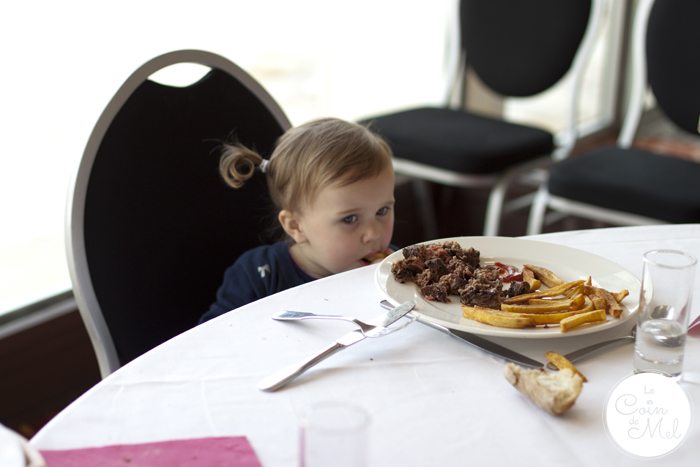 After that, the children went to watch a film and play in another room.

Meanwhile, the adults sat down for a six-course meal. The appetiser was goat’s cheese on ratatouille and it was delicious.

The following course, curé nantais (cheese) on toast served with salad and bacon, was also one of my favourites. 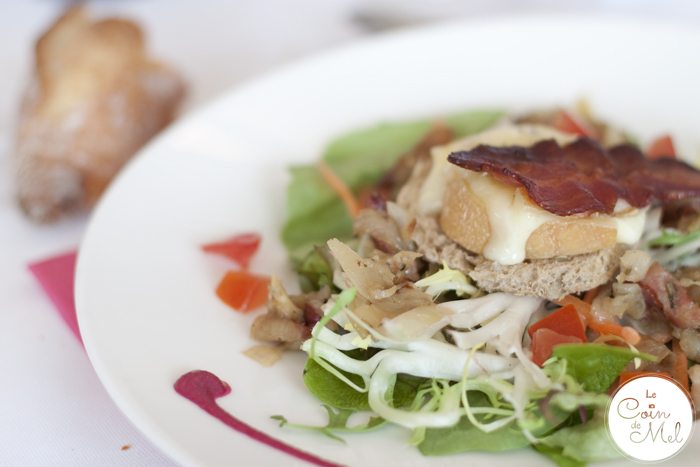 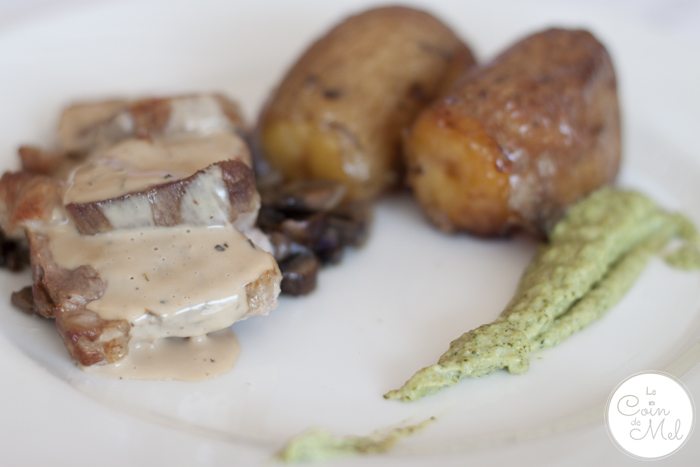 The cheese course was full of flavours, served with salad and red wine. 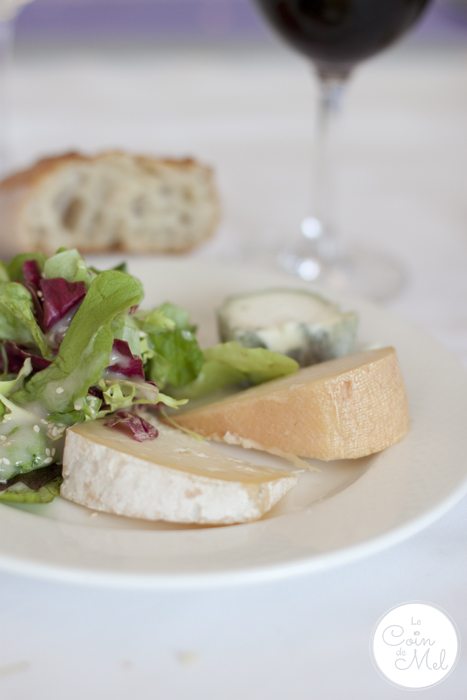 The children had macarons and sweets for dessert. I may (or may not) have wandered there for a taste… 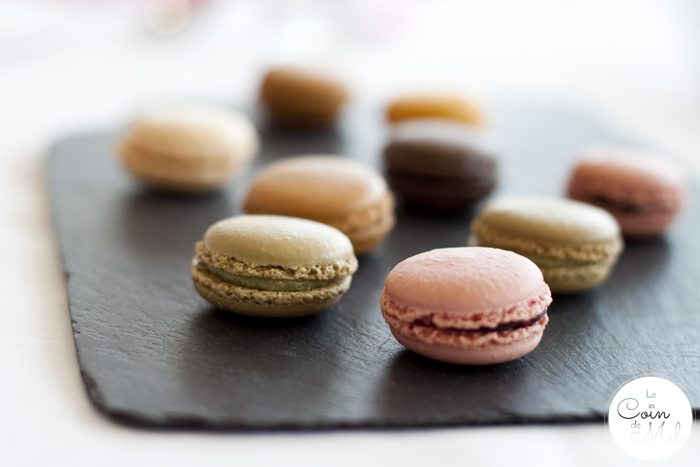 We spent some six hours sat at the table, chatting, enjoying our food and having a great time. We then went back to our hosts’ home and around 8 p.m., had dinner! Gosh I love French people’s attitude to food.

After sleeping about four hours, it was time for Wriggly and I to make our way home, not quite sure when we would next see our friends. Although we were sad to leave them, the thought of getting back to our family was an exciting one.

There are a couple of affiliate links in this post so if you choose to click and buy the toys I took on the train, Amazon UK would give me a small percentage of their value.

Previous Post: « How Can I Get My Baby to Sleep Better & for Longer?
Next Post: On Being out of My Comfort Zone & Cooking on Camera »