On Friday, as I collected Jumpy after school, I was told we were getting ‘Sweetie’ for the weekend. “Nice,” I thought. They must be trialling  a new reward system with sweet treats. A tad odd in 2017, but I have an open mind (and I like sweets). How wrong was I?

I wasn’t handed a packet of sweet, squishy Haribo. Oh no, no no… What the teacher handed me with a beaming smile was a large bag containing a teddy bear and an A4 exercise book. Traitor! She had no intention of giving us sweets. ‘Sweetie’ was the class teddy. How dare they? I’d barely recovered from the stress and pressure of an entire week with Beanie’s class teddy for half term. The wretched thing almost gave me a heart attack when we lost it at Kidzania.

“We have no ink in the printer,” was one of the first things that came to my mind as I smiled tentatively at a very proud Jumpy. Surely I could just get her to draw a picture of her and the bear. That would do just fine… or so I thought. Then I opened the A4 book. Oh gosh! The book was full of beautiful drawings and photos documenting the adventures of Sweetie.

That teddy’s social life is ten times better than my own! Not one single parent had gone for the ‘let my offspring deal with the problem and sketch a quick thing’ kind of attitude. Some of them had even gone to the lengths of drawing frames around the pictures and documenting every millisecond of Sweetie’s weekend. Right, I wouldn’t go over the top (no risk of that happening!), but I would probably have to go to Boots on Sunday evening to print some photos. Aaaaargh!

I cannot tell you how relieved I was when Jumpy and I came back from our best friends’ on Sunday evening. It was too late to go to Boots but we’d received the HP Sprocket Gift Box I’d agreed to review. OK, we could do this! 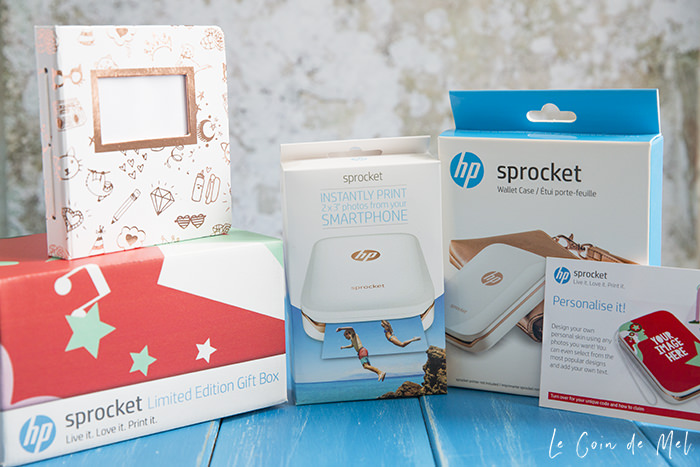 The problem with my printer at home was an empty ink cartridge. How would the tiny smartphone printer fare? Would there be printing paper with it? Would I actually be able to print the photos that day? Would it take days to charge? Would it be compatible with my phone? Did I actually have any space left on my phone to add another app? Yep, all those questions came through that tiny brain of mine before I even opened the box or checked what was actually included in our HP Sprocket Gift Box. 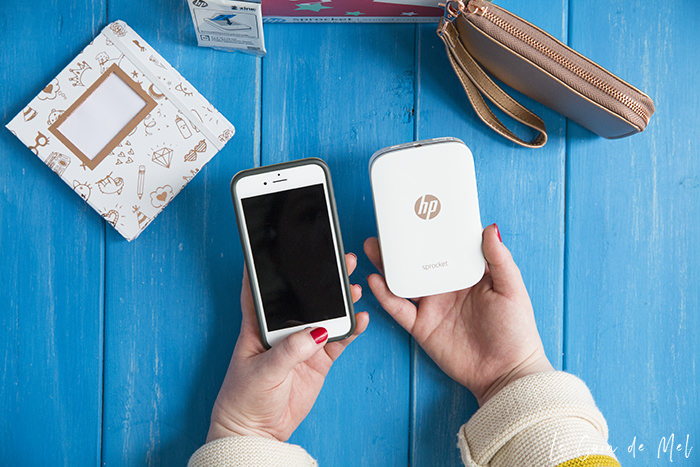 The box contained the HP Sprocket, which would give me 5 x 7.6 cm (2 x 3 inches) stickable snapshots whenever I wanted. It also came with a zippy bag in a fashionable rose gold colour, a charging cable, a pack of ten card-sized stickable photos and a photo album. I was amazed by the size of the printer, which was slightly smaller than my iPhone 6, and just about twice as thick as my phone. The compact printer was definitely designed to go wherever I go. It fits easily into my bag and weighs next to nothing (about 170g)!

The bundle includes the oh so chic rose gold wallet case, as well as the white and rose gold album, in which the printed photos fit perfectly, as well as a voucher for a free personalised skin for the Sprocket. This limited edition gift box would be my 14-year-old niece’s idea of the best Christmas present! 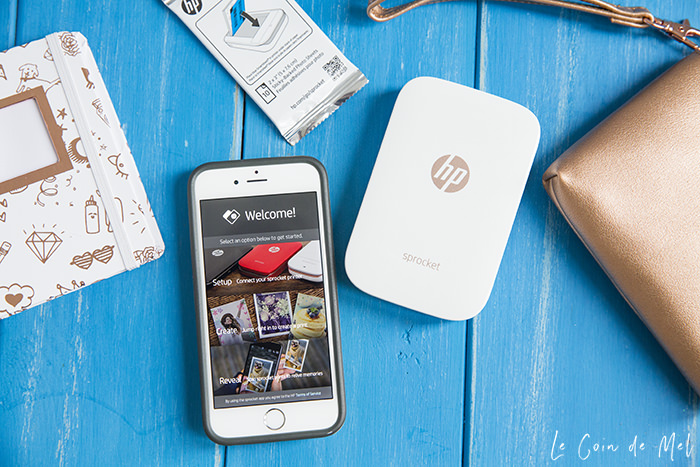 I wasn’t too sure what to do first so I started by getting the app for the HP Sprocket, and it took me through everything I needed to know. The app walked me through the paper loading process and it couldn’t have been simpler. 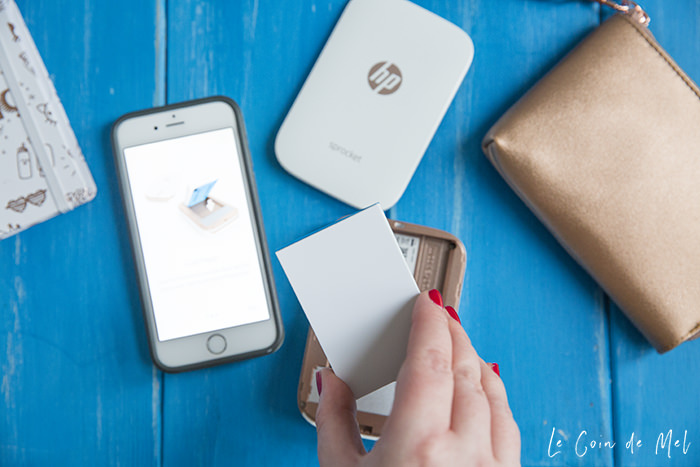 It then declared we were ready to start. What? Really? This quickly? Although I hadn’t charged my mini printer, it had enough charge to print a photo, Jumpy’s favourite one, taken on my phone as she was watching Harry Potter and the Goblet of Fire and cuddling Sweetie. 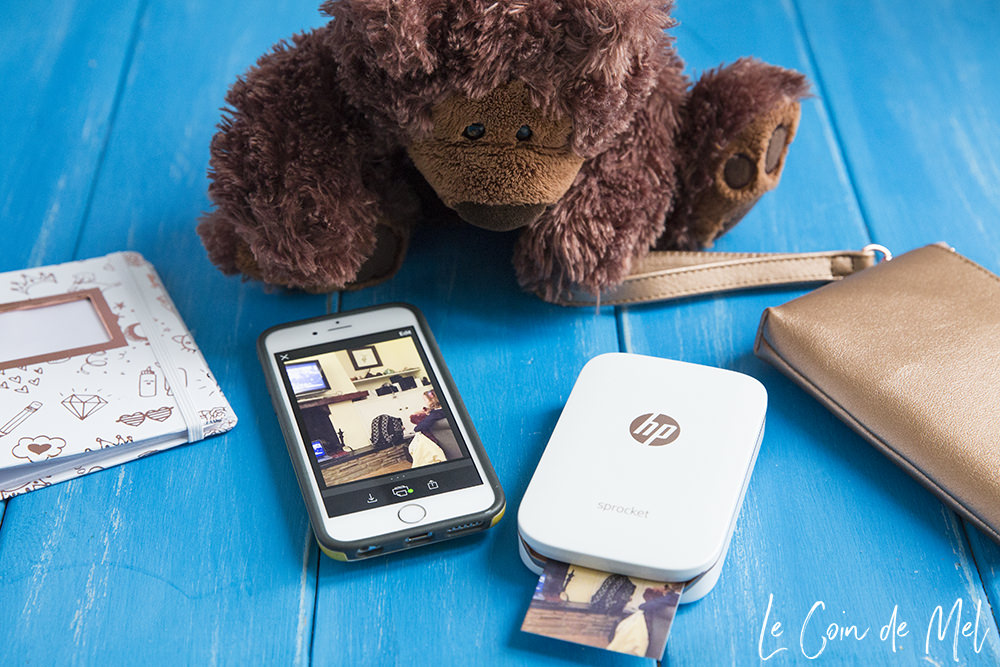 Printing took seconds. I couldn’t stop staring at the HP Sprocket, marvelling at the ingenuity of the people who created this little beauty. You don’t actually need ink to produce photos with the Sprocket, as it uses Zink Paper. That’s a huge saving on ink (and a lot less faff). I was impressed! I was even happier when I figured out I could peel the back off and turn the photos into stickers. Happy, moi? 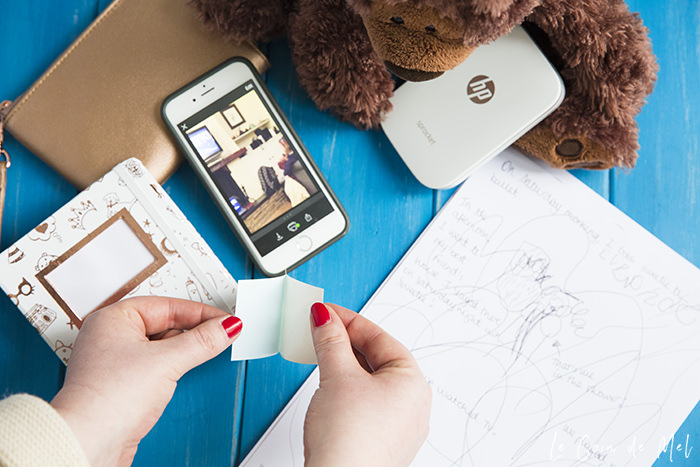 I wasn’t sure whether I could print photos I hadn’t taken on my phone, and it turns out it wasn’t an issue at all. I could just save the photos in my photo gallery and I’d get the option to print them too. Phew! I printed three more photos and we stuck them to Jumpy’s diary about the weekend.

OK, so did I intricately design a beautiful patten to use as a frame for the photos we were sticking on? Don’t be ridiculous! I simply let Jumpy draw whatever she fancied to sum up her weekend with Sweetie. Cuddles hearts and kisses feature quite a lot on her two pages (sounds like a great weekend to me!) and she even drew Sweetie with her. We then chose some photos from the weekend (Jumpy giving Sweetie a drink of water and an Oreo biscuit) and I printed them on our HP Sprocket. As soon as they came out, they were ready to be added to the diary, since they doubled as stickers (brownie points, you gorgeous little printer!). 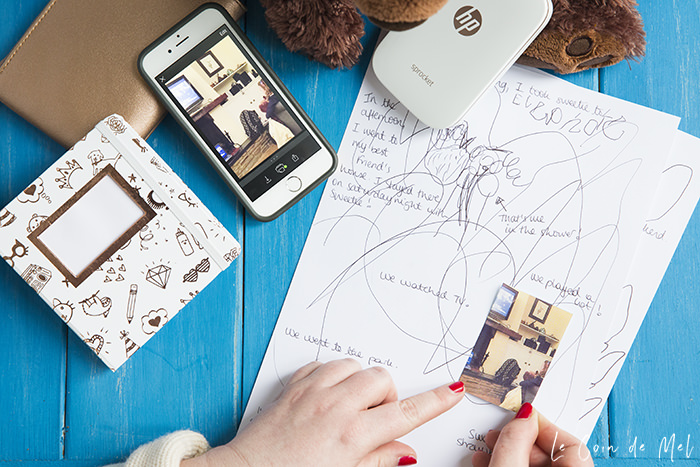 The HP Sprocket Gift Box is just perfect when you are after printing memories on the go. 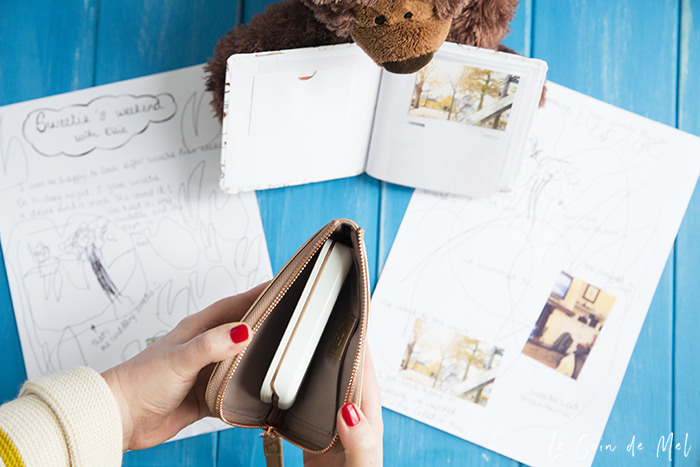 I took my eldest girl to the Harry Potter studios this evening, and as she was having the time of her life, I printed a couple of photos of her so she could stick them on her Warner Studios Passport and show it all to her teacher the next morning. Without the HP Sprocket Bundle, I would never had done that. The little printer is amazing, but I would have needed to buy a protective case had I not received the pretty gold punch in the gift box. With the bundle, I could just be spontaneous and take the printer in its wallet and just drop them in my handbag at the last minute.

I’m normally a DSLR kind of girl, but having my phone and the HP sprocket tonight enabled me to be a bit more ‘in the moment’ and worry less about the overall quality of my photography, and more about my daughter’s enjoyment and that huge smile on her face. Beanie loved the fact I could use the app to customise the photos quickly, by adding text, frames, stickers and filters. I could also print straight from social media (Facebook or Instagram!).

Would I recommend the the HP Sprocket Gift Box? Yes, yes, yes! I actually think it would be silly to buy the Sprocket on its own when the gift box is currently the exact same price as the printer itself (bundle reduced from £179 to £119.99).

I love it so much I don’t want to run out of paper, and just ordered a couple of packs of photo paper so I don’t run out! They’re pretty reasonable too, at £9.99 for 20 sheets. 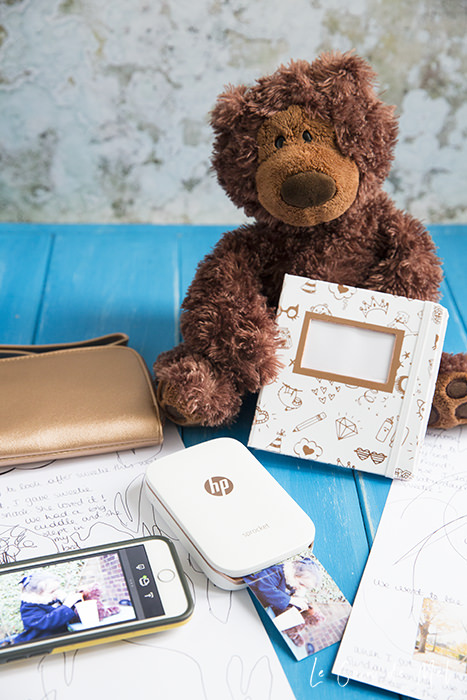 Disclosure: I was sent the Sprocket Photo Printer Limited Edition, White and Rose Gold Gift Set for the purpose of this review, but I did not get compensated in any other way. As always, all opinions and photos are my own. I love this products and have already purchased photo paper to keep using it with family over the festive period! There are a few affiliate links above, so if you click and order something from Amazon after clicking, I might get a small commission.