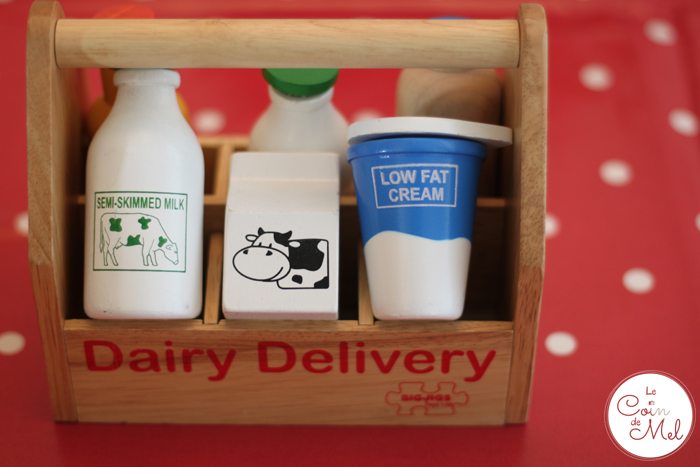 This afternoon, Jumpy (1 year 11 months) is having a milk protein challenge in hospital. This one is a biggie. It means butter, cheese, yoghurts milk and cream rather than non-dairy spread, soya yoghurts, hydrolysed whey formula, coconut milk and oat cream. Dairy products take a lot of space in my fridge and I would like my little one to be allowed to enjoy them as much as I do.

When I started weaning Jumpy and introduced a bit of formula, Jumpy did not drink any of it. It seemed obvious to me she did not like the bottle I was using as she was refusing expressed breast milk as well. Over the course of three months, I tried all the bottles I could find in shops and online. I also offered her three brands of formula. All attempts but one were unsuccessful.

Eight weeks before the end of my maternity leave, as I was once again desperately trying to get her to drink some milk, she had 30ml of yet another brand of formula. I nearly cried with joy. A few hours later, she started vomiting violently and she had diarrhoea for four days after that. Her eczema got worse as well. Yoghurts, even though she was eating them happily, had the same effect and the force of the expulsion was impressive to say the least.

After an allergic reaction and a visit to A&E, Jumpy had blood tests and a milk protein allergy (amongst others) was diagnosed and she was prescribed hydrolysed formula. The dietician gave us three types to try, and after rejecting the first two, she really liked the third. She was drinking it from a beaker and never went near a bottle. I guess she associated bottles with the dreadful feeling of being sick she was getting every time she was ingesting regular formula.

So far, Jumpy has had two food challenges in hospital. The soya challenge was a real success, the baked egg one a horrid failure. For the soya challenge, she was happy all day, drinking soya milk like it was the nicest thing in the world, asking for more and entertaining the nurses and other little patients on the ward.

For the baked egg challenge, I had made vanilla cake that contained six eggs. She was spitting everything out, even the first crumbs at the start of the process. When it came to eating larger quantities, it was an awful struggle. She refused it hidden behind blueberries, her favourite fruit. She also spat out the crumbs hidden in her favourite chocolate soya yoghurt. When I gave it to her disguised in her cereal bar, she tasted it straight away and spat once again. I ended up having to force-feed her a piece and it was awful.

She was not fooled. At the end of her observation period, the nurses noticed rashes on her face, arms and legs and she was given antihistamines before going home.

The journey towards today’s milk challenge started in April, with Jumpy’s first prick tests. There was no reaction on her skin whatsoever for the milk protein. I felt all giddy inside and started picturing my baby eating cheese and wondering which would be her favourite.

In July, she had prick tests again, and for the second time, the milk protein did not cause her skin to swell. She also had blood tests on that day, and when he called me in September, her paediatrician told me it was promising.

Most children grow out of their milk protein allergy before their third birthday. I am sure Jumpy will be one of them. Surely you cannot be allowed to keep your French nationality if cheese is banned from your diet!

We are raising money for Allergy UK by supporting Give It Some Welly, their annual fundraiser. Next week Friday, we will be wearing our wellies all day, trying to raise awareness about allergy and collecting funds for the charity. If you would like to support Allergy UK, you can donate here.