Just before Christmas, I was invited to GAME alongside my friend Donna from ‘What the Redhead Said‘ to learn all about Ninendo’s latest console: the Nintendo Switch.  Only a few days earlier, Crevette had told me about the newest Nintendo games console and how much he longed for one. I was going to find out exactly what that was all about! 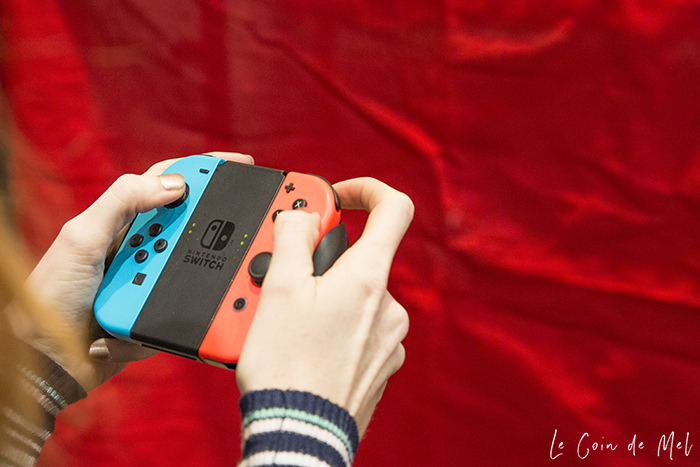 Hand model: Donna at ‘What the Redhead Said‘

The session was led by Gary, gaming enthusiast (OK, Nintendo addict), who told our small group all about the Nintendo Switch. My gaming days ended around 1993 when I lost interest in my Game Boy, so I didn’t have huge expectations. My children are more seasoned gamers, with a serious addiction to Dan TDM’s YouTube channel, a passion for Minecraft and between them, they have a few ‘vintage’ consoles (charity shop specials!): a Playstation 2, a Wii, a Nintendo DS, a 3DS, a Super Nintendo Mini… They’re not constantly stuck to a screen, but they enjoy having a play together or with friends.

Apparently, when the Nintendo Switch was launched in March 2017, it set the world of gaming on fire! I really can see why…

Its revolutionary design means it can be played individually on the go, as a tabletop game for a couple of players or with up to 8 players on TV screens!

What’s in the box?

The transition between handheld and TV play is seamless. You could be playing on the TV and as you’re leaving the house, all you have to do is pick up the console and you can keep playing it on the go, and vice versa. You don’t have to turn it on and off. The continuity is impressive.

With what comes in the box, you can play on the go individually, on tabletop mode with another player (2 controllers) or on the TV (dock).

It is a ‘social’ console. Up to 8 players can gather around a couple of screens and enjoy gaming together. 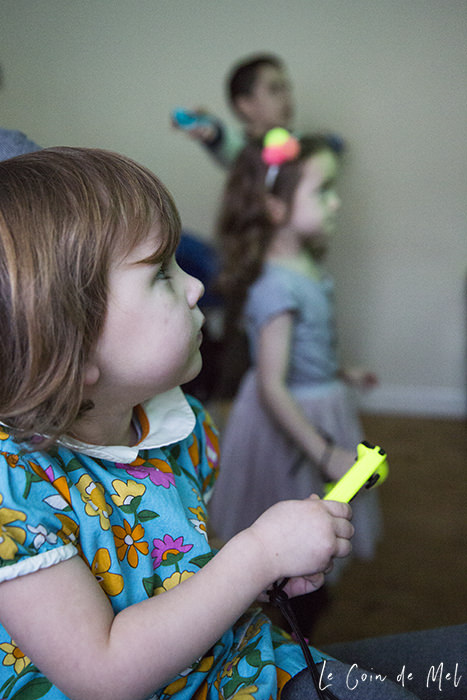 The graphics are absolutely stunning!

It is compact – not much bigger than a SatNav when the controllers are taken off, yet it is almost as powerful as the Xbox1 or the Playstation 4, but it is a fraction of their size.

More details about the Nintendo Switch:

Simply place the Switch on its dock to play it on the TV. It is honestly that simple! 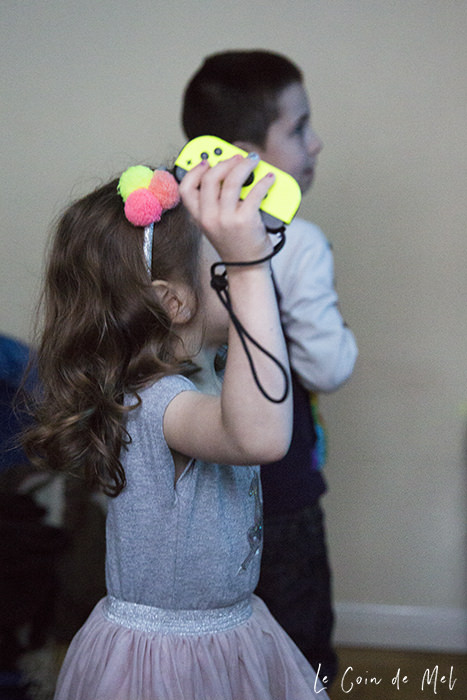 Memory is 32GB but there’s a slot for an extra SD card.

With ‘Local Multiplayer,’ you get an option to sync together with up to eight Nintendo Switch consoles that are close by for multiplayer games. You can also connect with other players nearby, even if you’re not connected to WiFi. My little man and his friend who came for a sleepover did that last night.

With the ‘Online Multiplayer’ option, you can play with friends far away and players around the world. At the moment, the service is free, but it will soon become a paid subscription. Subscribers can also sync a smart device app to meet up in online lobby to play and voice chat as they’re playing.

The Nintendo Switch has a detachable controller on each side of the console screen: Joy-Con (L) and Joy-Con (R). The Joy-Con can be attached to the Joy-Con grip to work like a traditional controller. Without the grip, they work as two individual controllers.

Each Joy-Con can be used for up to 20 hours on full charge. All you have do to charge them is attach them to the Nintendo Switch console or charging grip.

Controllers have ‘HD RUMBLE’ technology and they also have an accelerometer and gyroscope for advanced motion sensing.

With Nintendo Switch parental controls, you can make sure your children are safe whilst having fun. The ‘multiplayer mode’ is safe for children as they you won’t be able to communicate with other player (no chat option), just playing alongside them.

You can monitor your child’s play time, by setting a length of play time . An alarm will let them know when their time is up.

You can also monitor what games your child is playing via the app.

Finally, you can restrict features based on your child’s age.  You can for example restrict playing age-inappropriate games, communication with other users (posting images or messages) and disable purchases in eShop.

Top Games on the Nintendo Switch for Under 10s

The game is, according to EDGE, “the reinvention we’ve been waiting for since 2002.” In this game, you will join Mario in a globe-trotting 3D adventure to collect Moons so you can power up your airship (the Odyssey) and rescue Princess Peach from Bowser’s wedding plans. The 3D adventure is full of secrets and surprises! My four love this game! I personally struggle with it, as my dexterity with video games ended with the Game Boy in the early 1990s.

It comes as no surprise that Metro calls it “the ultimate multiplayer game.”

Up to eight people can play in local wireless multiplayer. The all-time favourite tracks and characters are there, and new characters are introduced too! Players can also carry two items at a time, and battle mode has been revamped. Now this is a brilliant game! We’ve played it again and again since Christmas. I’ve played with the children, my brothers, friends and I absolutely love it!

NintendoLife say that Splatoon2, with its 4-on-4 turf battles, “continues Nintendo’s trailblazing first year of Switch stunners.” I’ve not tried the game myself, but my 7 and 9-year-olds absolutely love it.

Now this is my personal favourite. There’s something for everyone in Just Dance 2018. It is fantastic and gets all  my children and I dancing frantically to beat each other! 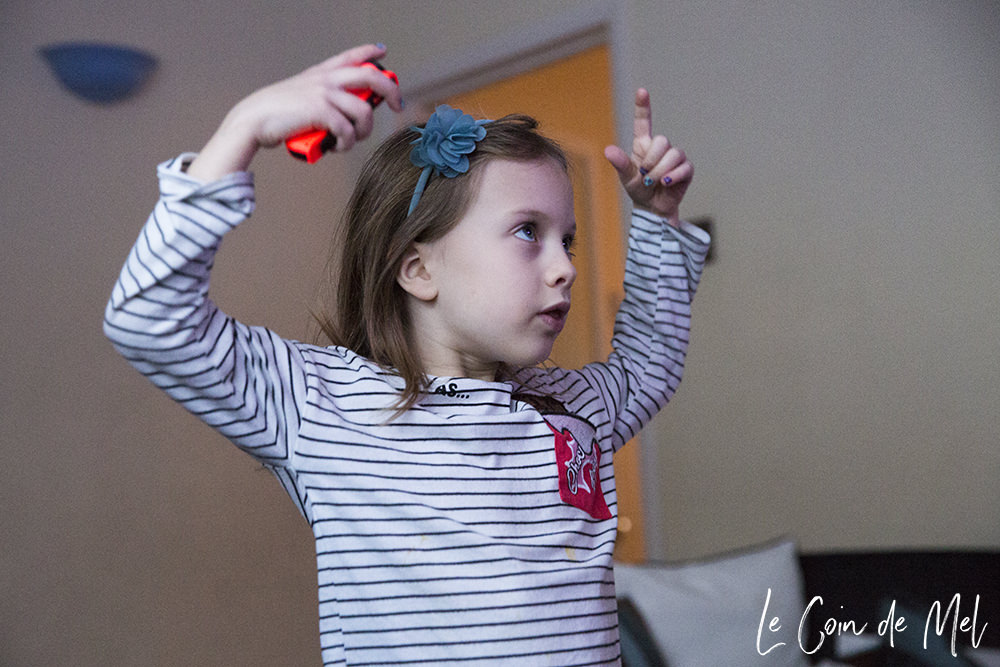 It is for gaming and gaming only (no apps or Internet browser).

It is a versatile and compact console, with 3 options for gaming:

Remove the console from the dock and the game you were playing on the TV will instantly appear on the screen.

Up to 8 players on big screens.

It’s multigenerational: everyone will have fun with it!

There are lots of demo games available in the eShop.

It charges automatically when on the dock, and you can also plug it in as you are playing it as a handheld console.

NINTENDO claim that SWITCH™ is “The brand new home console that you can play anytime, anywhere, with anyone!” That’s a strong statement, but I couldn’t agree more!

I can say hand on heart that the Nintendo Switch is the best thing since the Game Boy.

Have you tried the Switch? Which is your favourite game and why?

Disclosure: At the end of the event at GAME, we were given a Nintendo Switch and Mario Odyssey as a gift, but I wasn’t asked to write about if. I only wrote this blog post because we love our Switch so much!