This week, I challenged myself to put together gluten-free vegan lunchboxes, as I thought people out there might find ideas for 5 days of lunchboxes useful. I remember how lost I felt when my little girl was diagnosed with allergies, and how tough it was not to know where to find simple ideas to cater for an exclusion diet.

If you have to deal with allergies, intolerances, Coeliac disease, whether you are on a vegan diet, trying to get more healthy after binge-eating over the festive season or are simply trying to fill your lunchbox with a bit more fruit and veg, these tips and lunchbox ideas are for you!

Two of my children take lunchboxes to school. Although it can be a chore to pack their food when the fridge is bare, I love putting them together when I have given myself a bit of time to think about them and planned ahead.

Since I had a very specific aim in mind with my gluten-free vegan lunchboxes, I carefully planned what would go in each of them before going shopping as I wanted to make sure I had everything in one place and could pack two days’ worth at a time.

My friend Grace recently came up with brilliant Yumbox Lunch Planner printables and they make my life so much easier! Check them out here: you can download them for free. 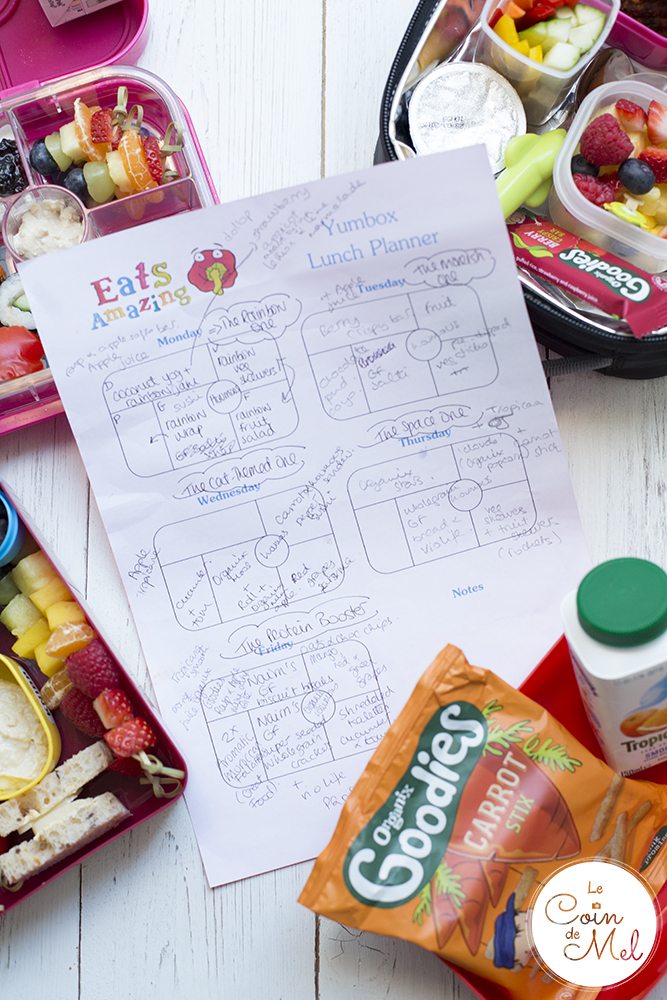 I thought it might be useful if I shared my shopping list for this week’s lunchboxes. Some of the ingredients were also used for my own lunches, and quite a lot of fruit was used in smoothies and at snack time. We also have a lot of crackers, cereal bars and other treats left over for next week.

This is what I used in more than one lunchbox:

I just wanted to show you the variety of convenient food and snacks you could get out there for fuss free gluten-free vegan lunchboxes. Some of those ingredients have ‘may contain’ notices so use your own judgement before eating them or giving them to your little ones. Also note than in some of the recipes, oats are used so they might have traces of gluten (if not gluten-free certified).

Accessories used in more than one lunchbox: 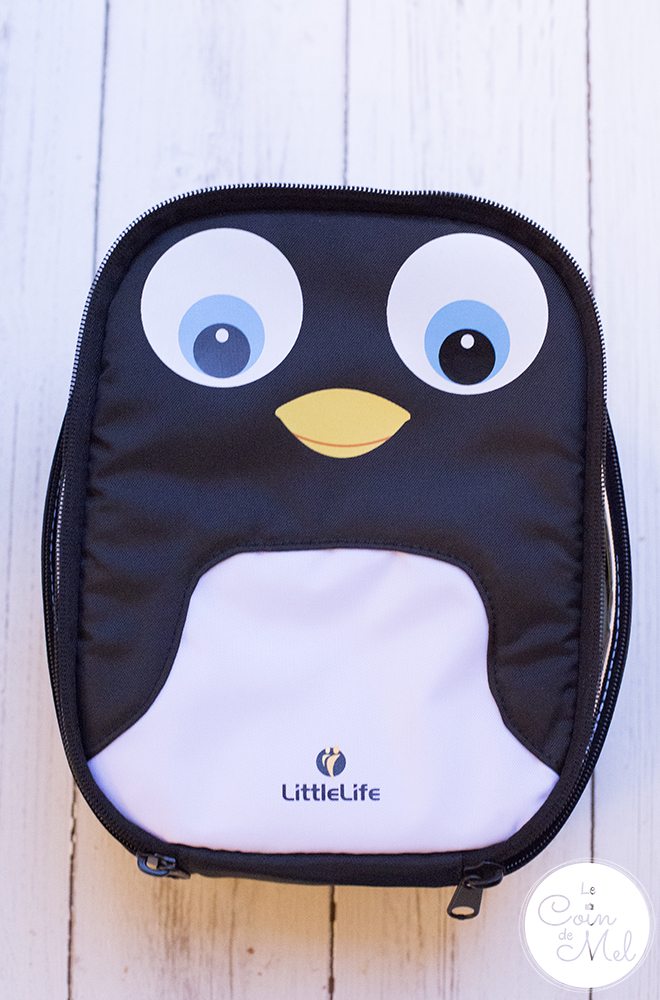 Here is what was in the lunchboxes this week:

Monday: The Rainbow One

To brighten up a grey Monday, we went for a vibrant rainbow lunch. 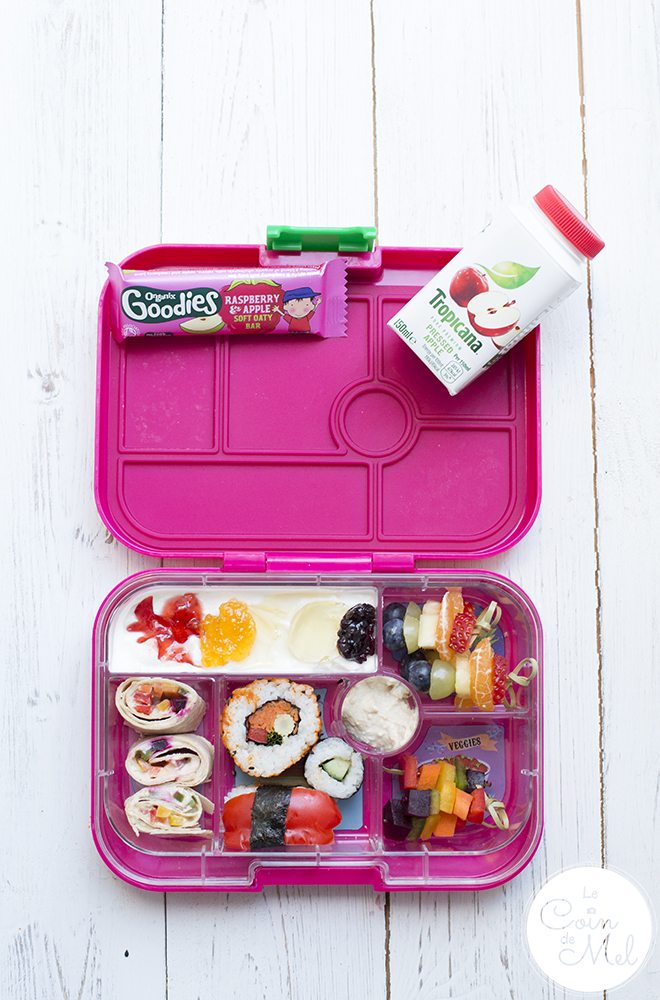 A few weeks ago, I spotted a recipe for rainbow tortilla wraps on my friend Grace’s site and  I decided to make a gluten-free vegan version of the same thing, using houmous and BFree Quinoa and Chia Seed Wrap with Teff and Flax Seeds. They were delicious! 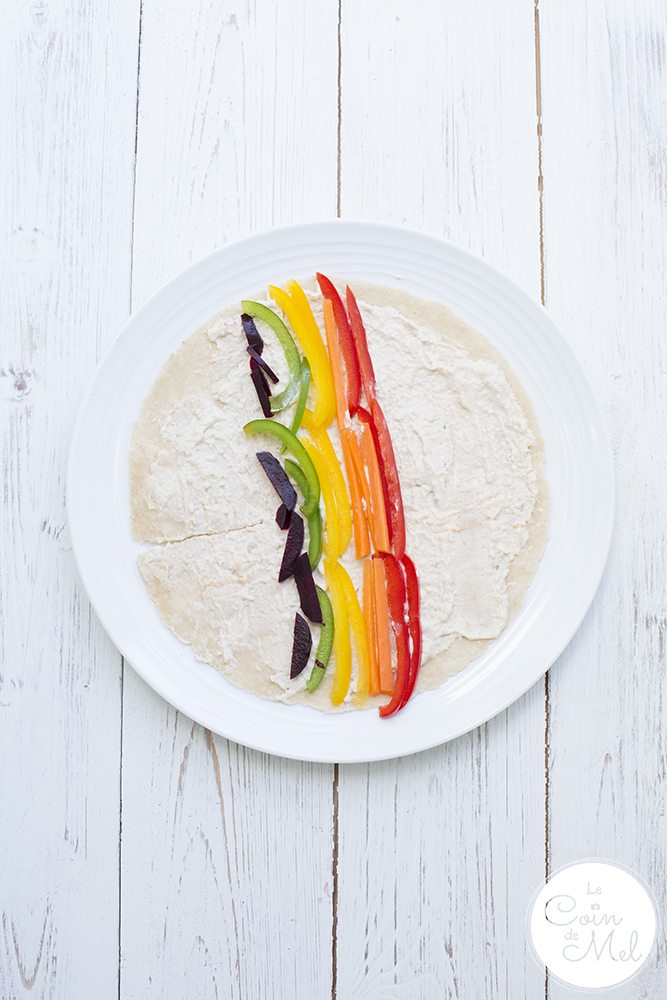 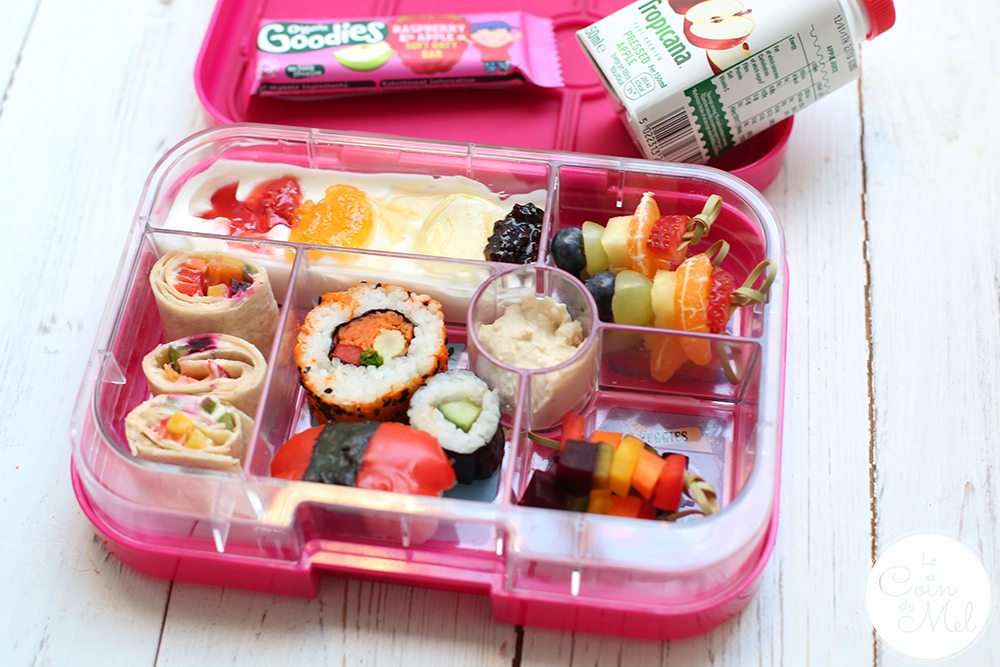 Tuesday: The Space One 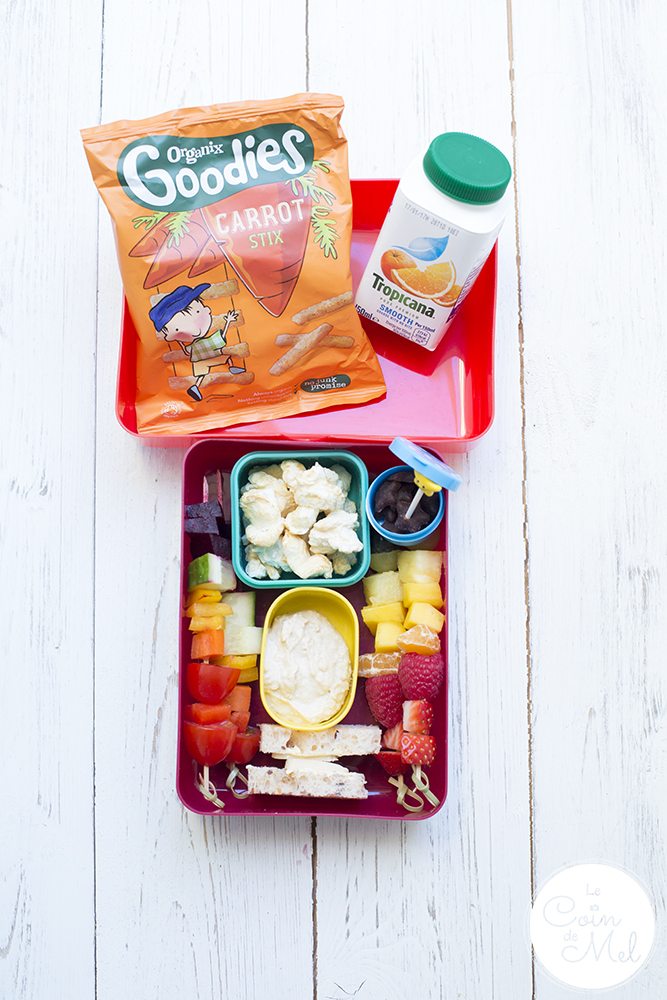 Wednesday: The Cat-Themed One

On Wednesday, we went for a silly one by attempting a cat-themed lunchbox.

I somehow managed to lose half of the animal cutters I bought for Wriggly as a Christmas present, so my first attempt at sandwich art is clearly not the best ever, but hey! I spread some houmous on Schär toast, added paper thin slices of carrot and topped with a cat’s ‘face’ (ahem). 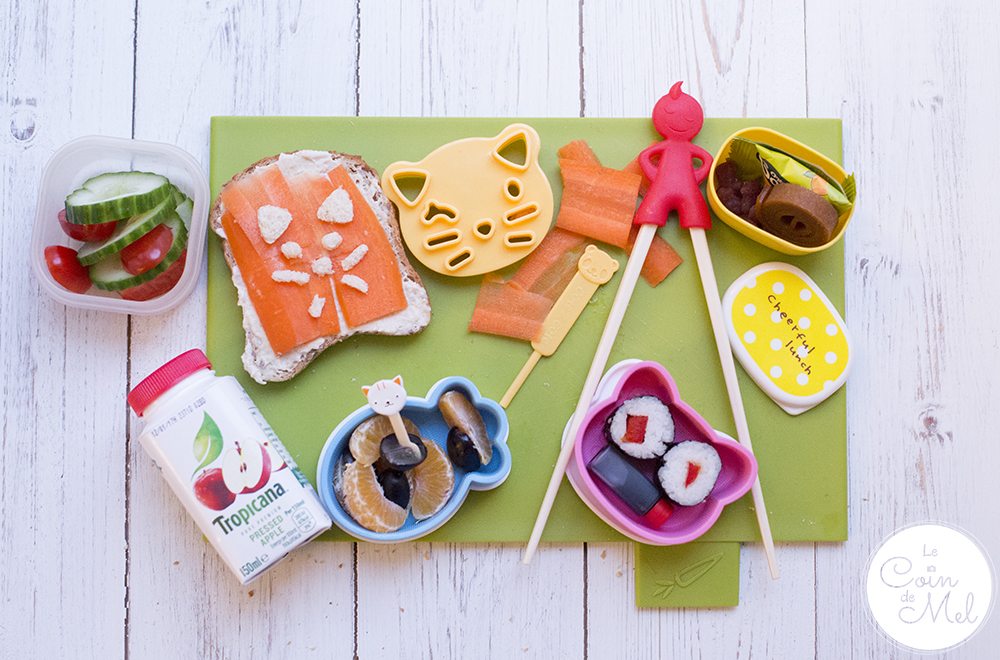 The Cat & Fish Mini Food Containers were too cute not to be used so I added two pepper sushis to one with a bit of soy sauce, Wriggly would use child-friendly chopsticks to eat them.

I filled the other with fruit (halved red grapes and satsuma)

I added halved baby plum tomatoes and cucumber, made into a long strip. 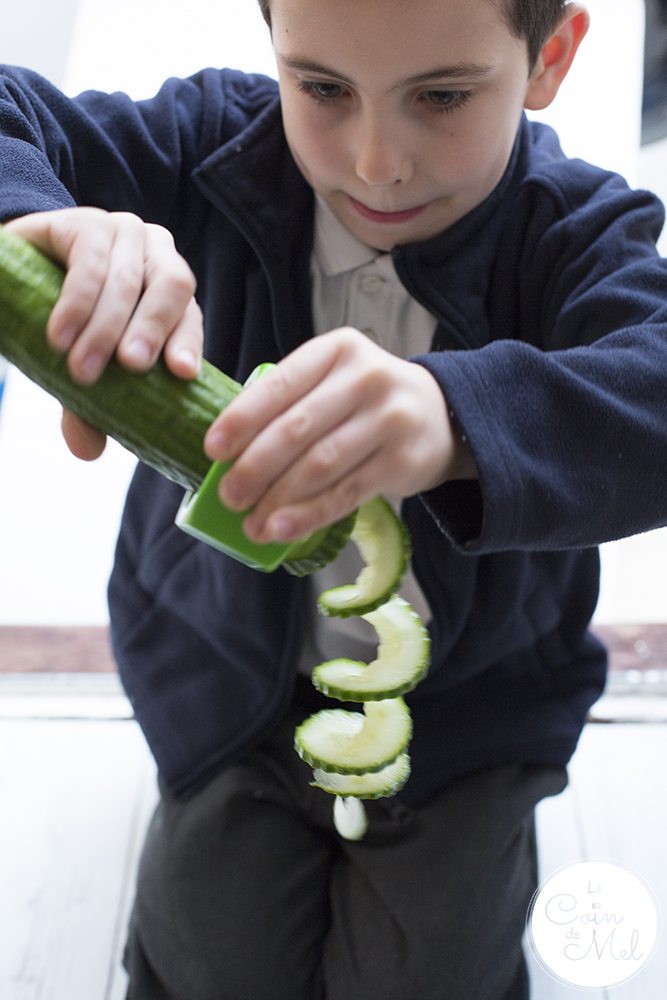 She also had Animal Face Fork Picks to eat the fruit and snacks. 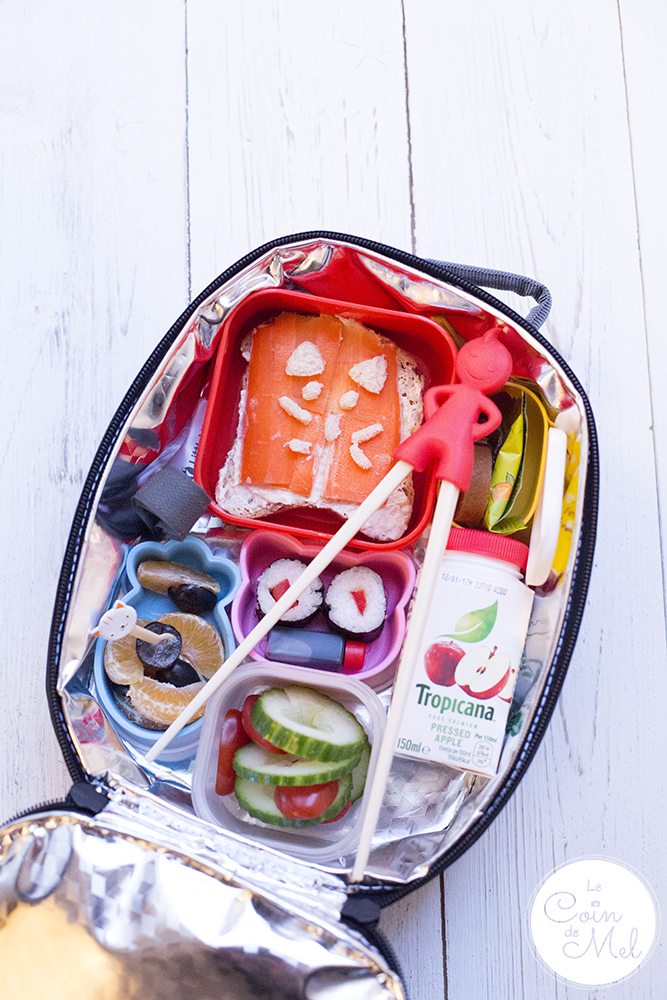 Thursday: The Moreish One

Who doesn’t like a bit of a treat? That is what Thursday’s lunchbox was all about: moreish, chocolatey, gourmand. Shall we start with dessert? Berries, pineapple and mango are my children’s favourite fruit so they were pleasantly surprised to get them at this time of the year (they only get bananas, apples and satsumas in January normally). There was also a Little Choc Pot by the Coconut Collaborative and an Organix Raspberry & Apple Moos. 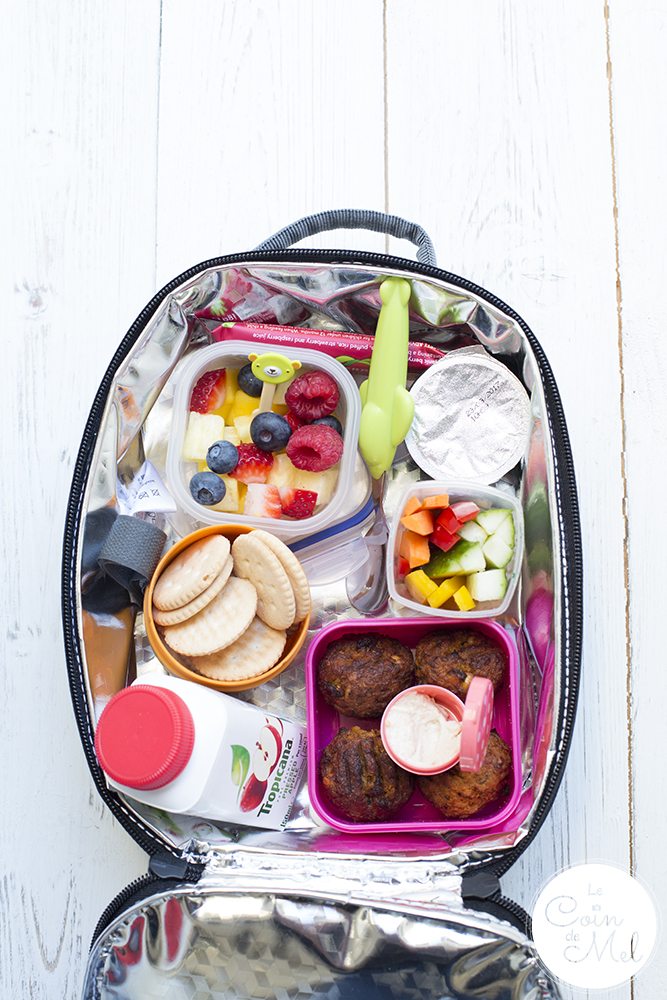 Like most children, my four love crackers so we went for Schär’s Saltí. They also had houmous with falafels, which were bursting with flavours, as well as vegetable strips, pre-dipped in houmous in a handy little Sistema Box as well as a small bottle of apple juice. 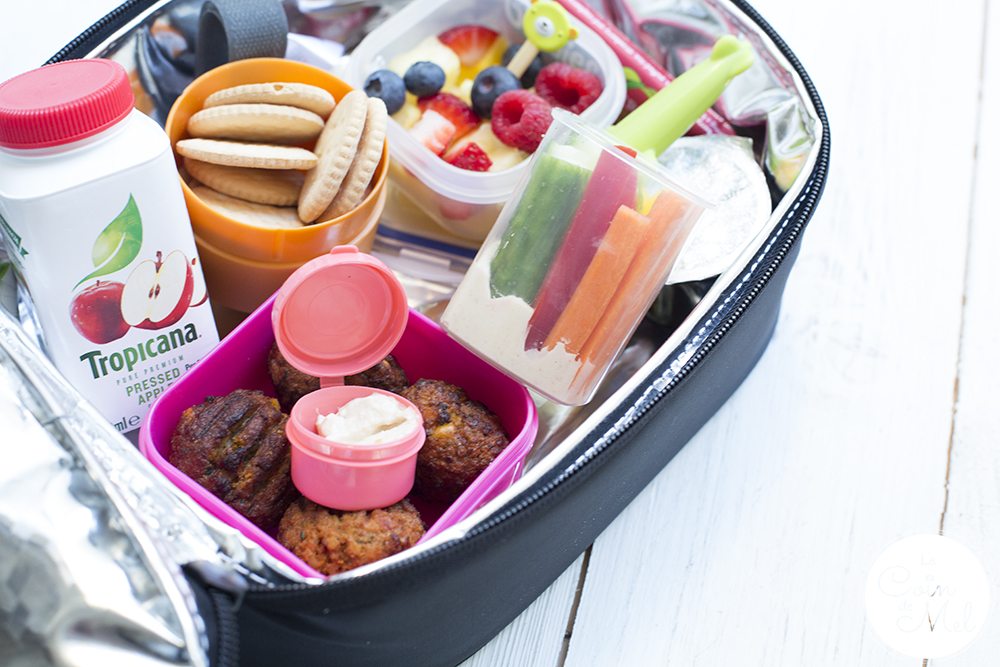 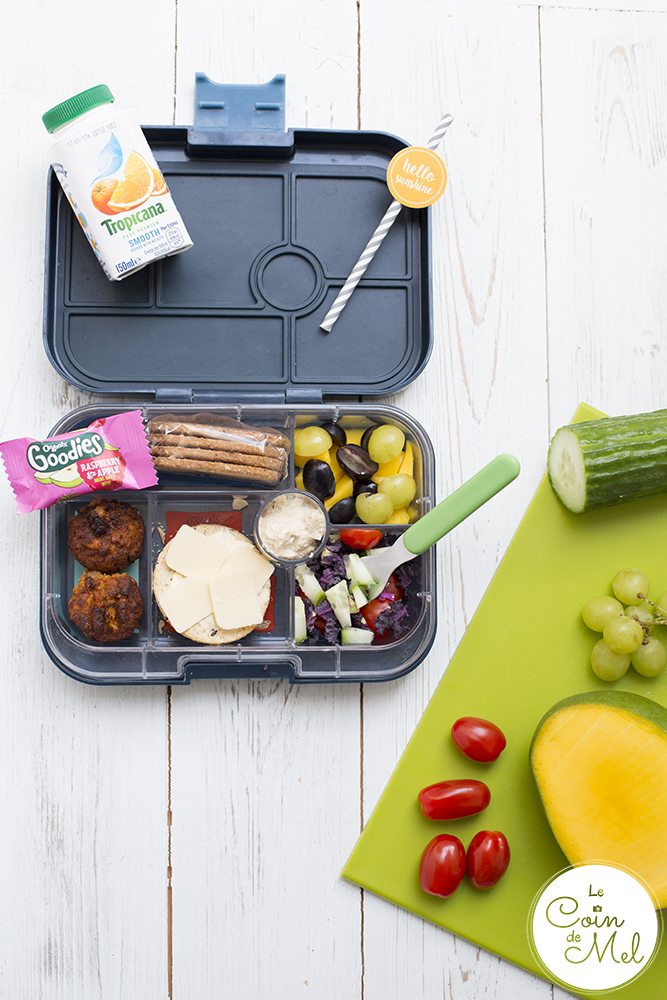 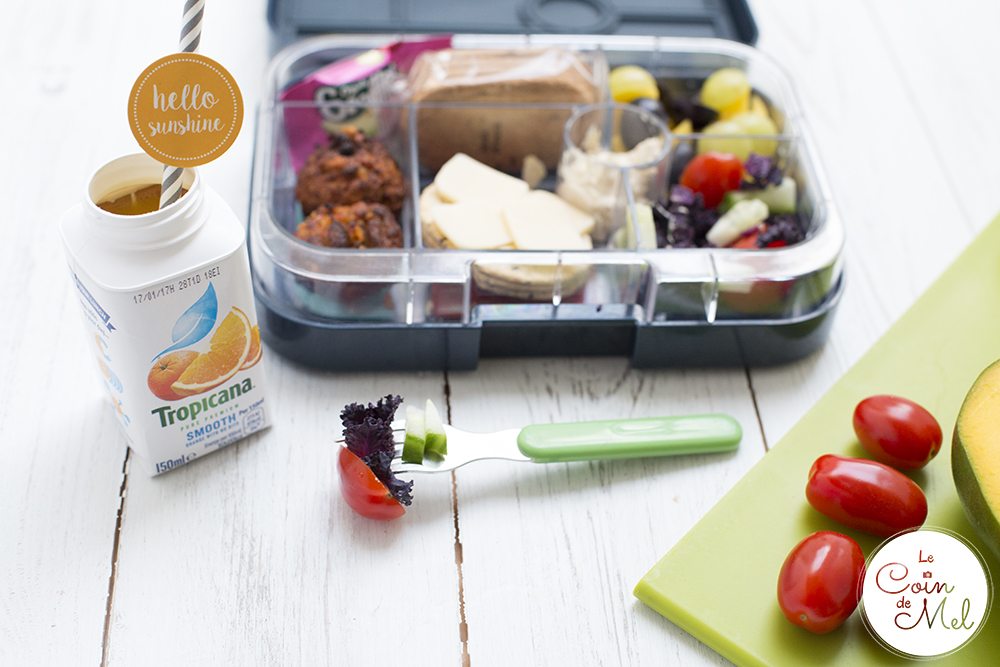 What else would you have in no fuss gluten-free vegan lunchboxes?

Other posts about lunchboxes: