Home » Uncategorized » Kids' Corner » Perfect Manors, or How to Feel at Home Away from Home

After a wonderful stay at Kingsmills Hotel during half term, we headed out of town and into the breathtakingly beautiful Scottish countryside, 7 miles away from Inverness.

A short drive through the woods took us to the sort of place you only see in fairy tales. Unsurprisingly, Achnagairn Castle was recently named Harper’s Bazaar’s number 1 wedding venue in the UK. 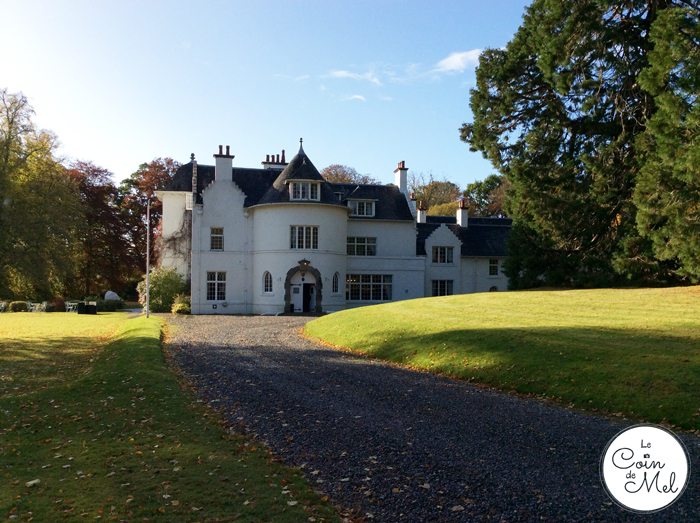 There has been a house on the site for the past 400 years and during the Second World War, Achnagairn House was used as a hospital. The ballroom was full of beds then. Achnagairn changed hands quite a lot after that and developers even attempted to divide it into flats. It then became dilapidated before it was bought by Gillian and Michael Lacey-Solymar, who started the mammoth task of restoring the house. It all started with a dilapidated mansion, but two years later, no signs of desolation remained.

The five-star rated venue, all opulence and luxury, has been open for business since 2008. It is mainly used for corporate events, weddings or family holidays. The listed heritage building contains many interesting architectural features like the typically Scottish crow-stepped gables, an impressive vaulted ballroom, wood-panelled walls, tastefully decorated rooms and modern colour schemes that give the venue its unique character. 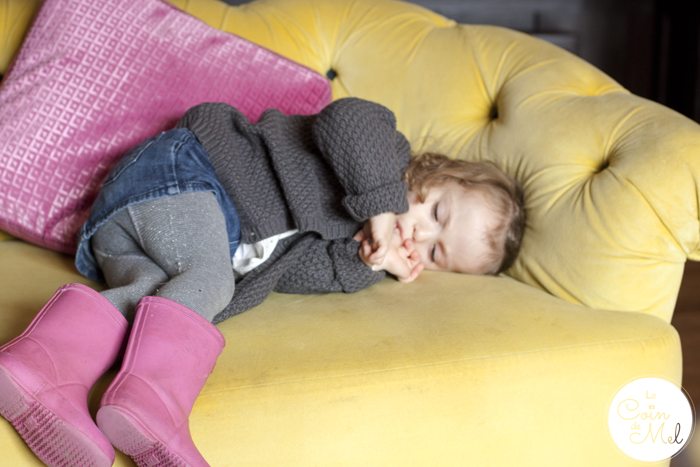 As work was taking place at Achnagairn House, the Savoy was closing for refurbishment and the owners managed to get lots of nice pieces in the auction: beds, sofas, armchairs… The old and the new cohabit in a seamless way, forming a stylish yet quirky ensemble. 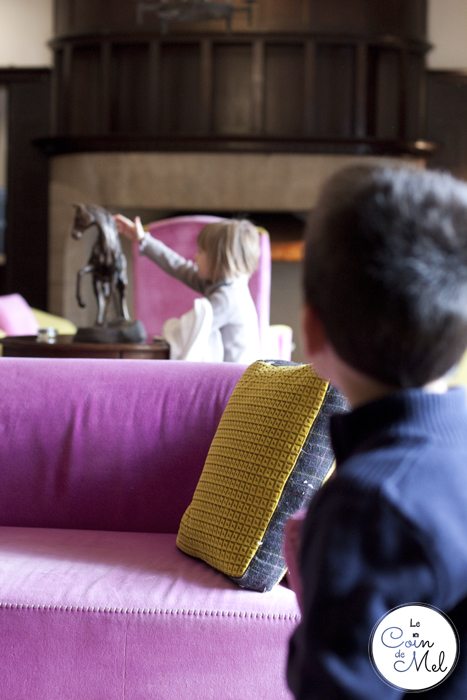 Perfect Manors pride themselves in not being a “big, bland hospitality chain” and they are certainly living up to their motto, “Escape the Ordinary.” If you get a chance, pop in to see Michael McBride, the Managing Director of Perfect Manors Achnagairn, who has worked in some of the most luxurious hotels in the world, including the George V in Paris. His office is quite simply my dream work space: I would not change a thing there. Michael welcomed us with open arms, making sure every need was tended to, not even raising an eyebrow when we all arrived for breakfast half an hour after we were supposed to. He even organised for our laundry to get tumble-dried and my laptop cable to be found after we had left. I could not fault his hospitality!

For two nights, we stayed a Stag Lodge and experienced self-catering with a oomph! The large luxury lodge was perfect for the six of us with my beau-papa extraordinaire (father-in-law). There was so much space left in the house we could have had another two couples with us. 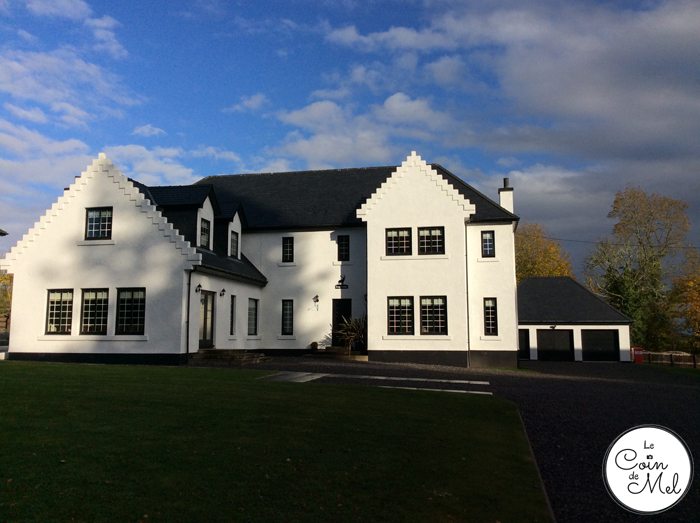 The first things we saw as we entered Stag Lodge were the pool table and the piano. 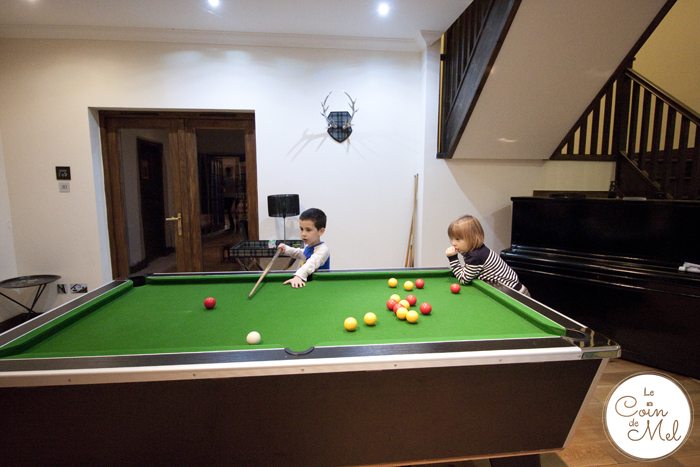 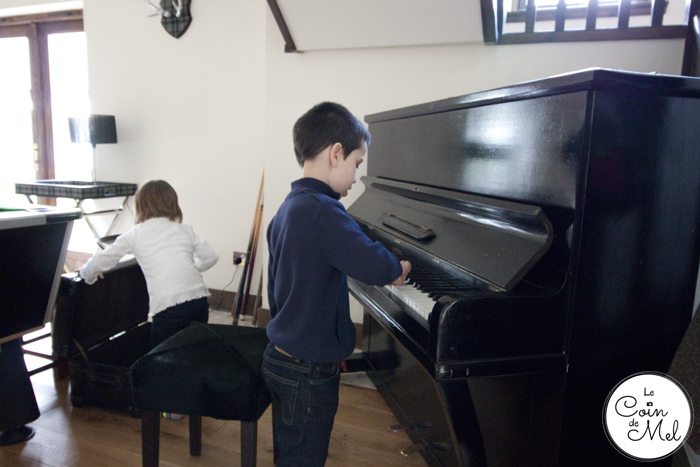 The living room was spacious, comfortable and consistent with the stag theme. 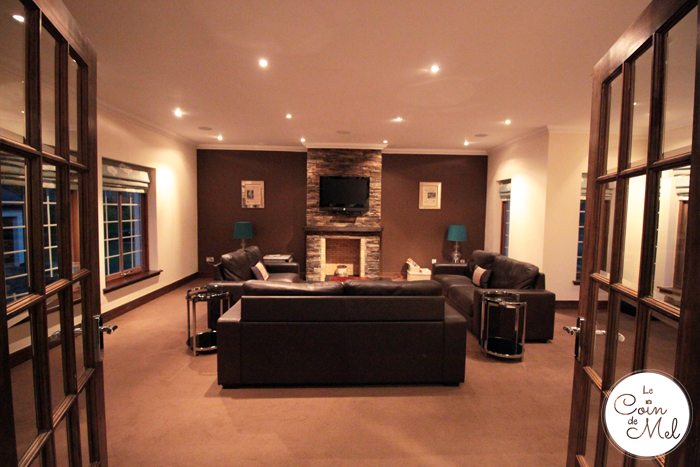 My favourite room, unsurprisingly, was the kitchen, with its large dining area, integrated coffee grinder and coffee machine (many lattes were consumed in these two days), cooking equipment and electricals. 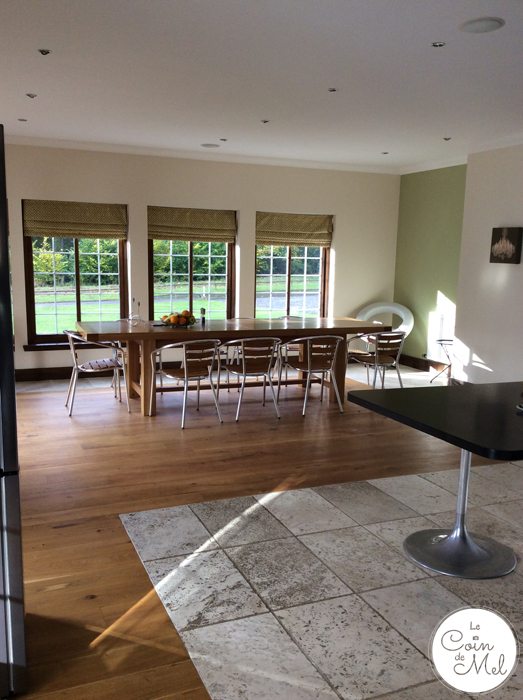 The back kitchen had yet more worktops and a washing machine. A few treats had been left there for us: a couple of bottles of wine, plenty of crisps, jam, chocolates, biscuits and cereal. They really have hospitality down to a fine art at Perfect Manors! 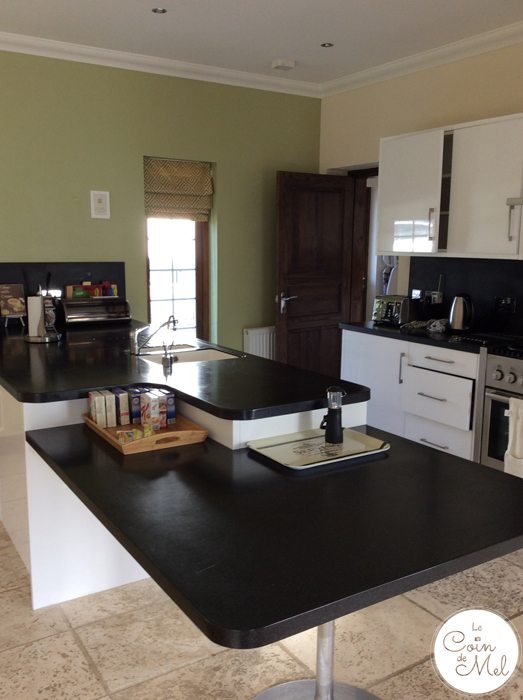 Every single bedroom was entirely individual, with plenty of pillows, deep, comfortable mattresses, bottled water and tissues.  It is obvious that guests’ comfort is at the heart of Perfect Manors’ philosophy.

After walking around every single room, Hubby and I went for the room that appealed the most to us. ‘Serene’, with its neutral tones, relaxing atmosphere, dressing room that had its very own bureau in and more than enough space for a travel cot, was quite simply perfect. 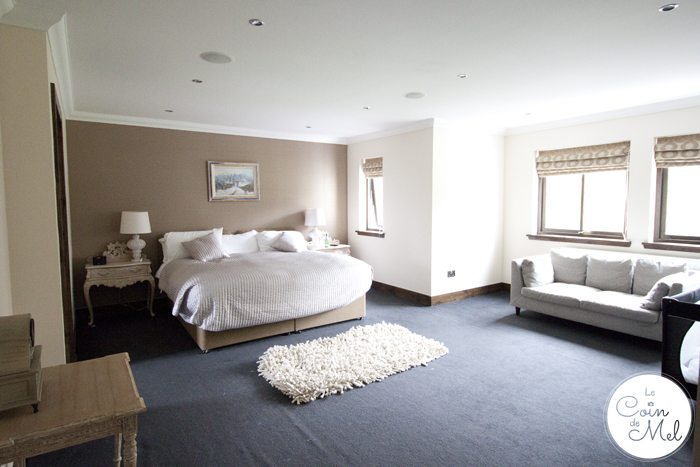 I also like the fact Perfect Manors provided us with a Sangenic nappy bin. If you are parents, you will know how tricky it can be to dispose of smelly nappies when you are in a hotel or rented accommodation. Frantically searching for a public bin to dispose of them is not my favourite hobby I have to say.

Although I was not a fan of the ‘Bling Bling’ room, the children adopted it straight away and moved in with their own backpacks before I even had time to ask them which room they preferred. 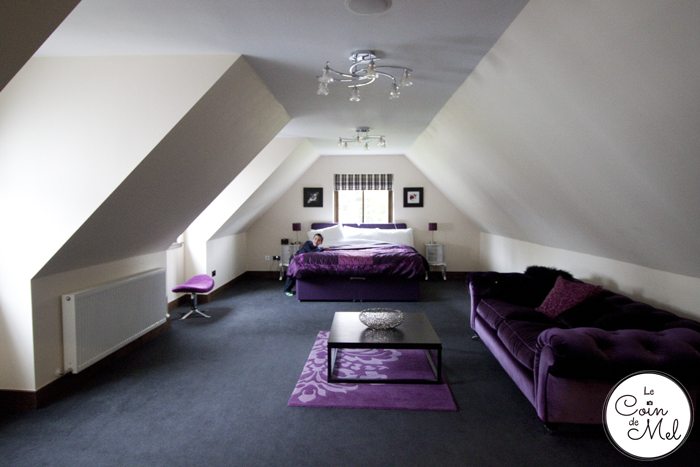 Initially, we told them they could not use the television that was in their room, but after a chat, we decided it would be a lovely treat for them for a couple of days, so we allowed TV in bed for the first time in their life. They have never been this quiet at bedtime! 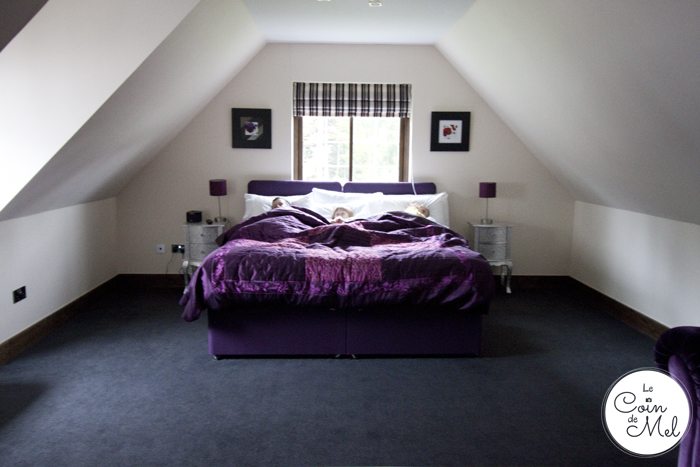 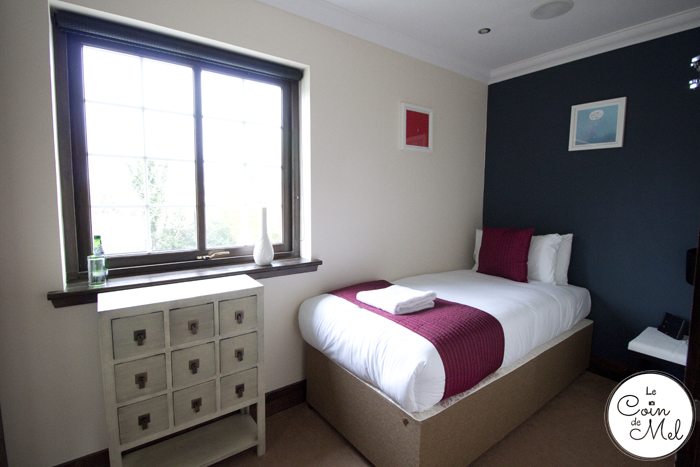 Another room, ‘Shaken (Not Stirred),’ had a James Bond theme, 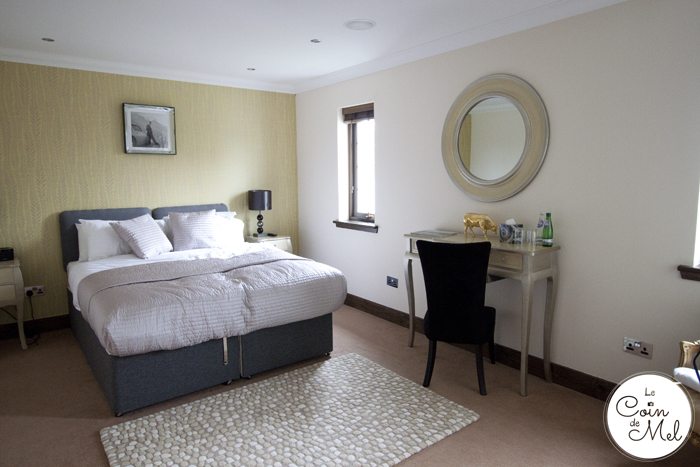 and the last room was decorated around stamps. 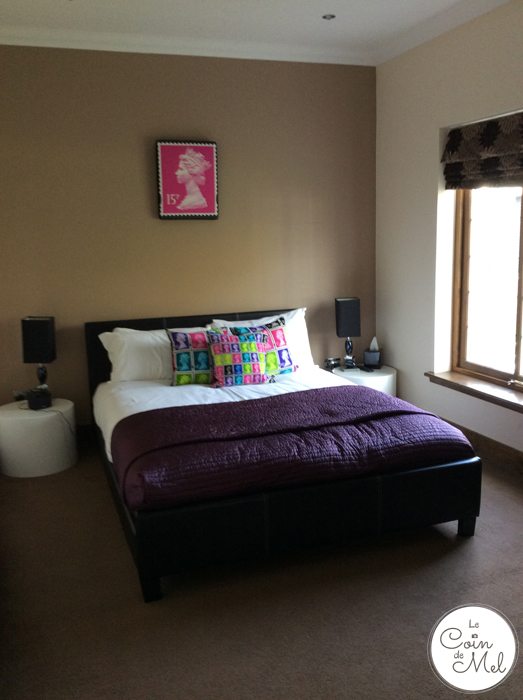 The bathrooms were all sumptuous, and although there was a recognisable colour and style scheme, each was unique. One had a large shower, another one a corner bath, and the largest, which was by far our favourite, had a huge bath and walk-in shower. 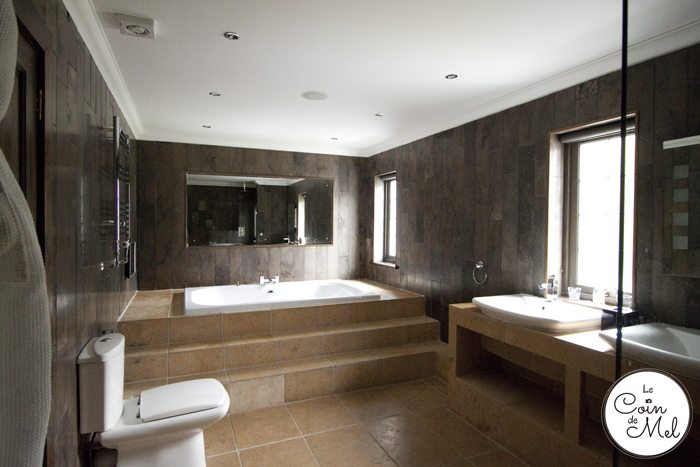 The children spent a lot of time in the bath, and I in the shower. They were not even bothered by the fact the TV by the bath was not working. There were no arguments when it was time for a bath and they probably washed twice a day when we were there, so that they could ‘swim’ in the bath. 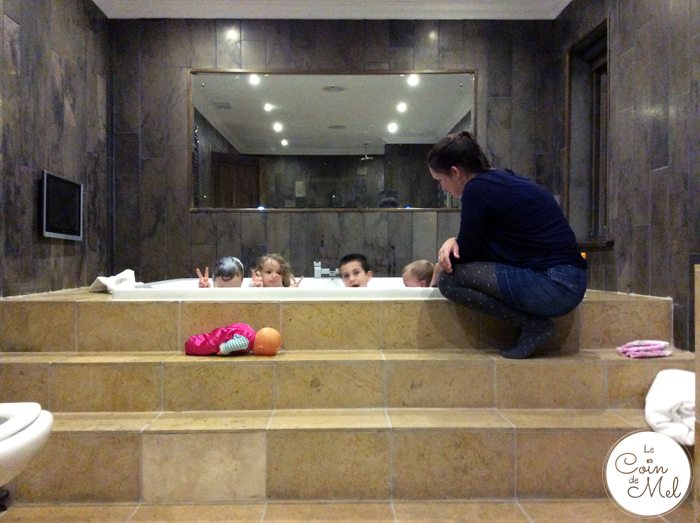 Stag Loge is a beautiful modern house and it really felt like a home away from home, only bigger and better.

The design is superb and tasteful, with lots of features around the house to go with the general theme: stags. 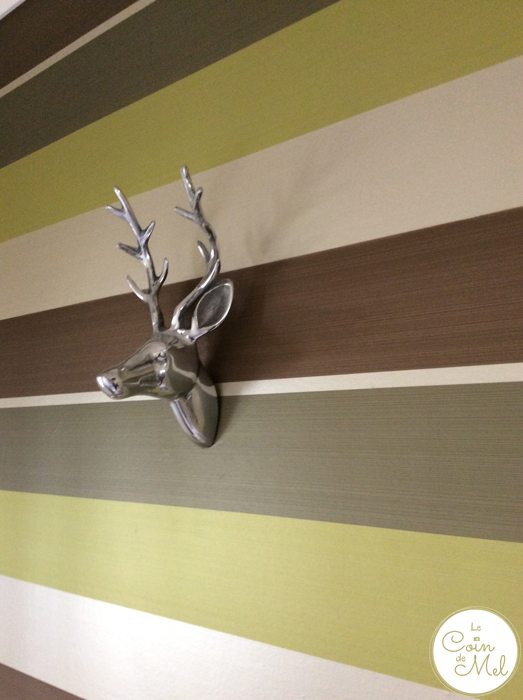 As part of our stay, we were treated to breakfast at Achnagairn House, only a few minutes’ walk away from our lodge. It was quite something! 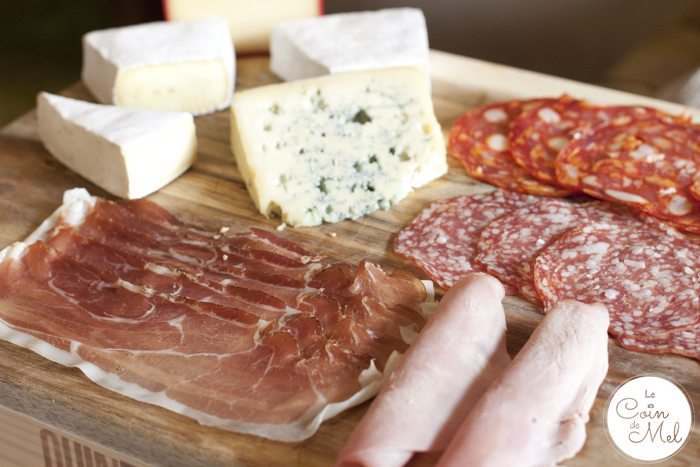 There was a lot of choice, plenty of fresh fruit and more fruit juice options you could dream of. Most importantly, the coffee was strong and brewed to perfection. 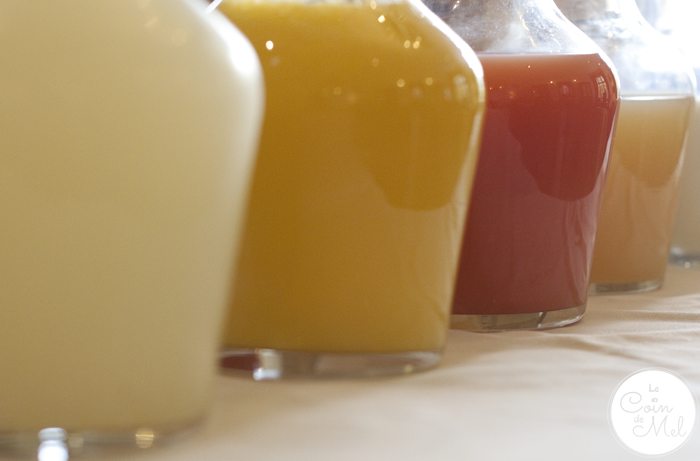 Perfect Manors comprises of seven large luxury lodges which are ideal for groups of ten to twelve people to hire. Whether guests are looking for character or sheer luxury, they will find it in their lodge.

It really makes the perfect place for a group getaway and I would love to be able to take my mum, nan, brothers and nephews there, if I can ever get the whole French side of my family to have a Scottish getaway.

There is a theme running through each lodge and I am sure my family would fall in love with La Belle France, with its rooms like Provence, Paris and Le Jaune et le Bleu. I am a big fan of impressionists and my room of choice would be Monet Monet Monet, with a huge water lily frieze above the bed.

This really is a very special venue for anybody looking for a wedding venue or family gathering, within easy reach of Inverness airport. If you are partial to a road trip, you will drive on the most spectacular roads Britain has to offer.

Disclosure: We were invited to spend a couple of nights in Stag Lodge free of charge and were offered breakfast at Achnagairn House. All opinions and photographs are my own.

Previous Post: « None of that Rubbish in 2016!
Next Post: Jamie & Jimmy’s Friday Night Feast, Series 3 Episode 2 – For the Love of Langoustines! »