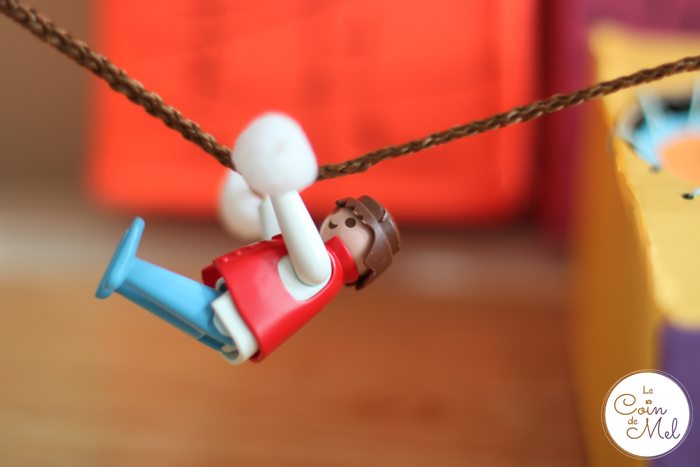 We rotate toys at home. There are two main reasons why I like to do that, in no particular order:

I do it three or four times a year. The principle is simple: whenever something comes out of the loft, something else has to go up.

Just mentioning rotating toys is like Christmas for my little ones (I am not joking, have a go!). They try to remember what is in the loft and get really excited about the new playing opportunities they are going to get.

For this system to be effective, all of one particular type of toys has to go, for example all the soft toys, all the building blocks, all the Playmobil, all the micro machines, all play food and so on and so forth.

We thought we would get the Playmobil out of the loft a couple of weeks ago as Jumpy (1 year 5 months) is old enough not to swallow them (please do not prove me wrong, baby girl!) and they will have to go back up before our new baby is born in June. For some reason, on the day the Playmobil came out of the loft this time, all Crevette (5 years 8 months) and Beanie (3 years 6 months) did with the tiny little people and their accessories was throw them on the floor and play with the stuff for less than ten minutes.

I wanted to encourage the children to do something with the Playmobil whilst letting them be creative this week and asked them what they wanted to do. Last time it came out of the loft, we made a Playmobil town, complete with a prison, houses, a campsite and had hours of fun all together. This time, after much deliberation, Crevette declared he wanted to make a play area for the Playmobil characters. He wrote a list of things we had to include: trampoline, swimming pool, tunnels and we added zip wire to the mix as well as a ball pit just to make it even more fun.

On Tuesday, we rummaged through cupboards to find as many cardboard boxes as we could as well as bright coloured papers to stick on them so they would be as colourful as everything seems to be in soft play areas. 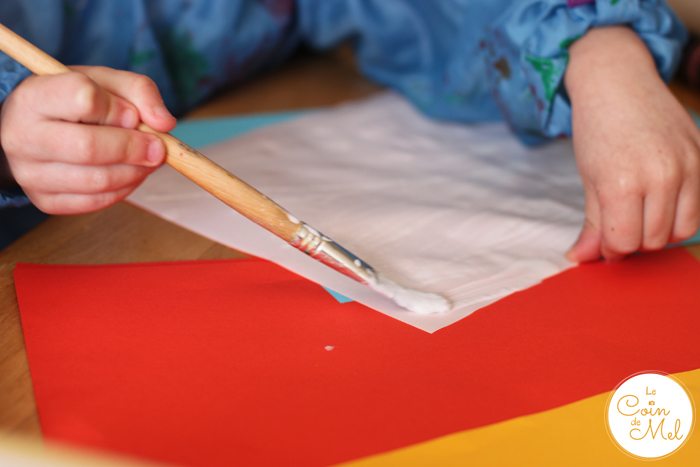 On Wednesday, as school was closed for Crevette, we had the whole day to ourselves which was ideal for our little project. Crevette and Beanie spent a couple of hours using PVC glue mixed with water to stick the bright papers to the boxes. 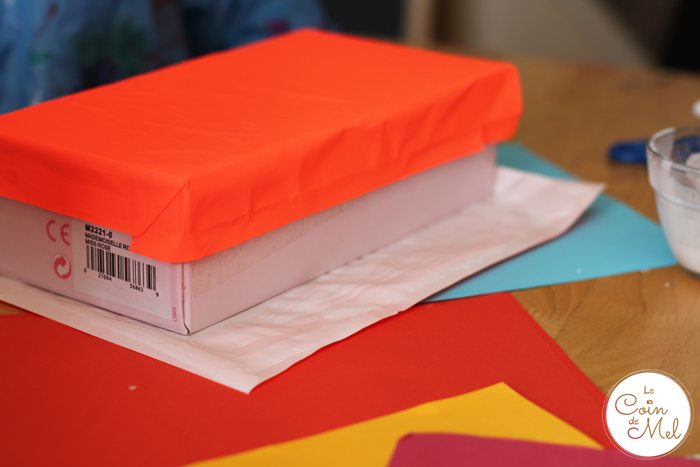 Jumpy was not left out of the equation. To make sure she was involved but did not get covered in glue, I gave her a similar paintbrush and recipient as her older siblings. The only difference is it only had water in. 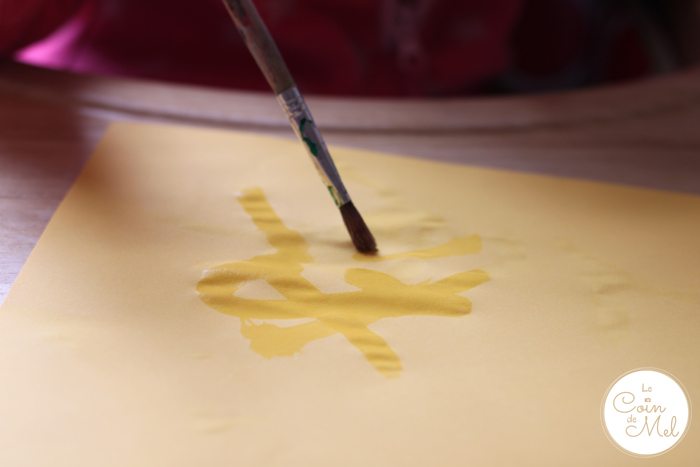 She enjoyed water painting for about 15 minutes before she started sucking water out of the brush and then drinking the water out of the small bowl. She was thirsty and her beaker of Neocate was quickly followed by a nap. 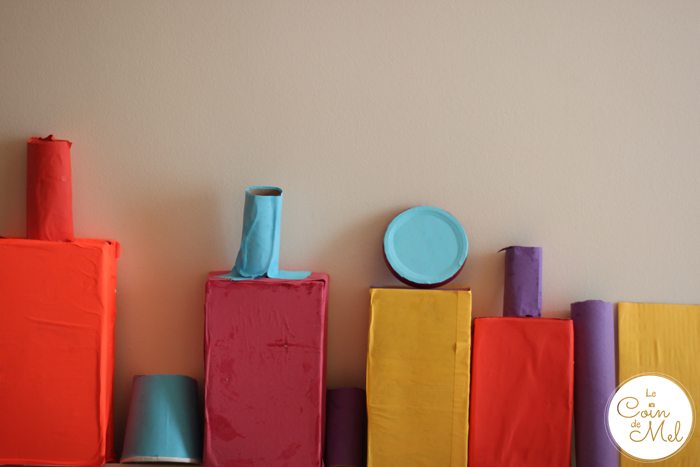 Crevette drew on the boxes when they were dry. Beanie had lost interest by then and was engrossed in a card game for which she was making up new rules. 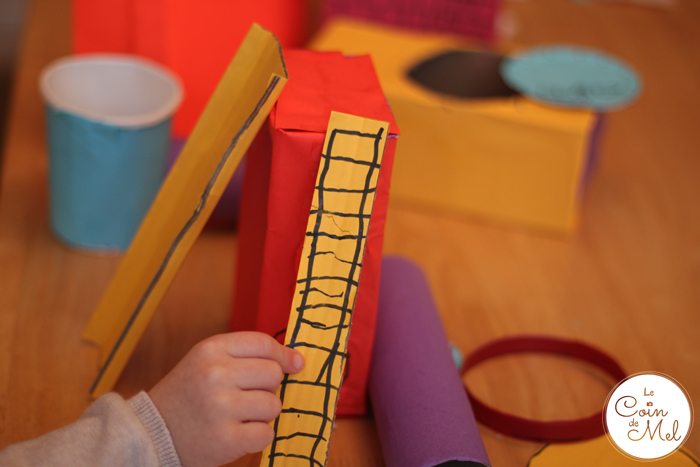 On Saturday morning, as the girls were relaxing with hubby in front of the television, Crevette and I got everything out and applied the finishing touches to the trampoline and made our ball pit using a bowl and foam bits from a parcel. 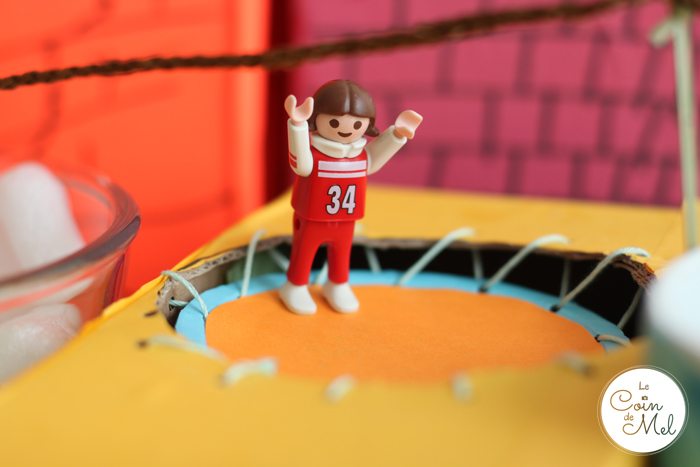 We also put the zip wire together and added food colouring to the water going in the swimming pool and paddling pool. Everything was ready, to Beanie and Crevette’s sheer delight! 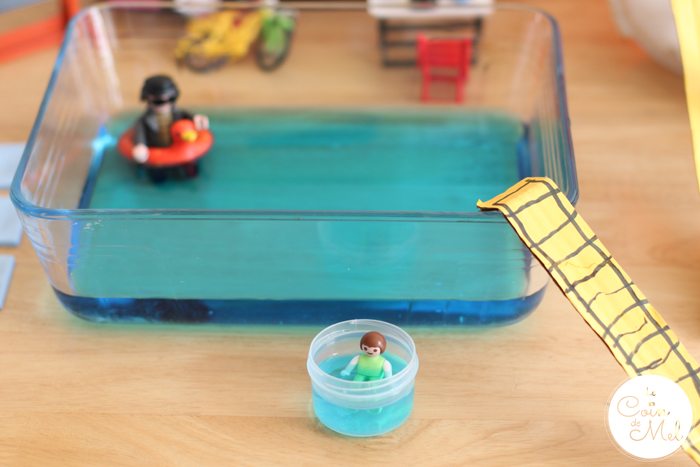 After the children’s swimming lessons, the older two played with their Playmobil play area whist Jumpy was having a short nap, and after dinner, they proudly showed their little sister the little people bouncing, going on the zip wire and the slides. She was laughing and applauding whenever one of the little people was coming down the slide. 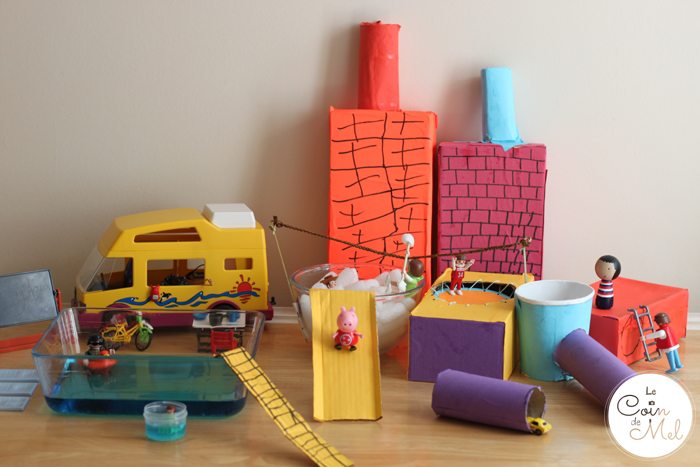 Who needs to spend money on new toys when the novelty can be achieved by a little bit of rotation and imagination?

We did not even buy any of the Playmobil as the majority of it was given to us a couple of years ago by a lovely colleague whose children are now adults and the rest was a birthday present Crevette received last year. 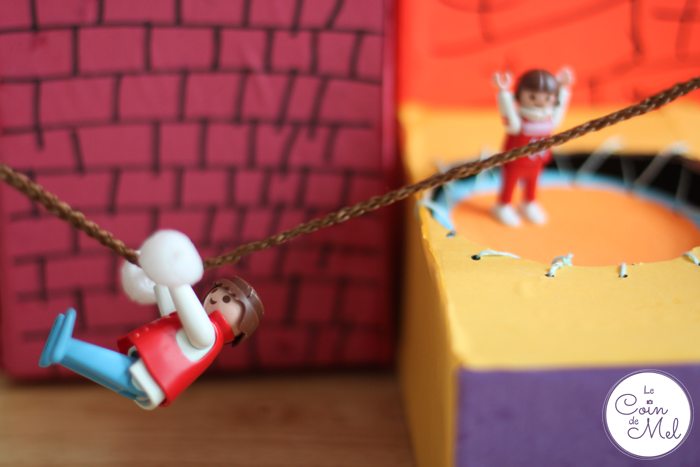