Home » Uncategorized » Kids' Corner » Learning » Is School all that Different in France?

Beanie (4 years 4 months) and Crevette (6 years 5 months) have just spent three weeks at my mum’s local school in France. I also enjoyed the experience by teaching a couple of English lessons to all classes, from nursery to Year 6. It is without the shadow of a doubt an experience we will all remember for a very long time.

We headed home last Sunday and as I was getting my children’s school equipment and clothes ready for Monday, I was trying to decide which of the two systems I liked the most. I am no expert on the intricacies of the French and English educational systems and these are simply my own observations from the past three weeks. It should give you a glimpse of what my little ones and I experienced.

To set the context, Crevette and Beanie’s infant school here is in an urban environment in the suburbs of North-London. My mum’s local primary (École Primaire) school, which also has a preschool (Maternelle) on site, is in a small village 110 miles North-East of Paris.

The first difference I noticed was the size of the children’s bags. Whereas my little ones carry book bags only at home, with the odd newsletter and reading book in, the children in France were pulling along huge school bags on wheels. They looked more like suitcases than bags fit for small children.

I asked the children what they were carrying around. They had books, exercise books, stationery, clothes and ring binders in their bags. Thinking about it, I remember my mum once weighing my school bag in Year 6 or 7 and it was 11.3 kg! That is as heavy as Jumpy, my two year old girl!

We put together a pencil case for my little man, complete with ruler, rubber, glue stick, scissors, pens, pencil sharpener and colouring pencils. He loved that as he is only allowed to use pencils provided by his school in England, and rubbing mistakes is not something he is normally allowed to do.

The playground in the primary school was a bit dull and grey but the little Frenchies loved la récré (playtime) so much most of them arrived fifteen minutes early in the morning. Most children were chatting and walking around in groups, with just a minority running around. In case it gets rainy, there is a préau (covered playground). During his stay, my little man spent a lot of time just chatting to his new friends, playing hopscotch, sitting at the old style desks or playing on the giant Connect 4. 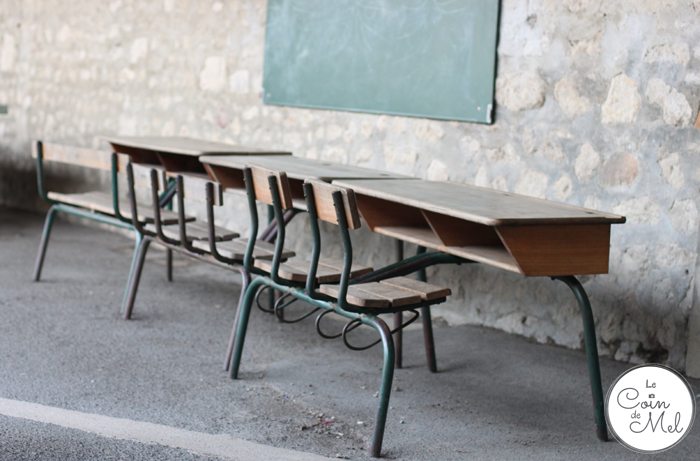 None of the children were taking their bikes or scooters to school. A lot of them were walking. Others arrived by car or coach. 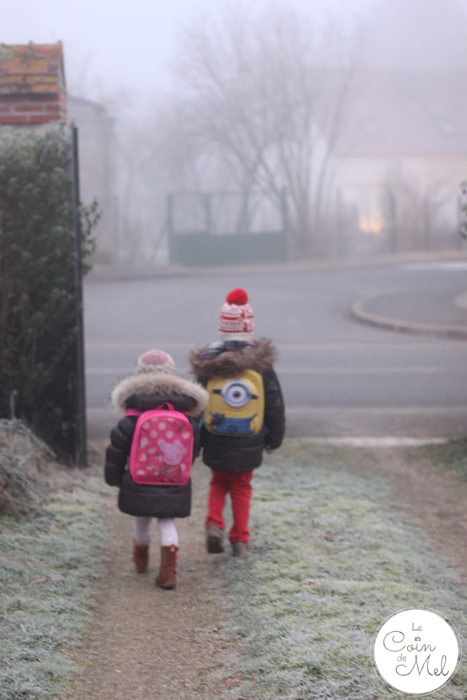 There is no school uniform in France. Crevette was really surprised when he asked me what clothes we had to pack for school in France and I replied he could wear what he wanted.

In France, the children did not need a PE kit or trainers. Their exercise was a range of games rather than sport as such.

The only thing Beanie was asked to bring was a pair of slippers. As they arrive each morning, French nursery school children sit on a tiny bench outside their classroom and take off their shoes, put them under the bench and put their slippers on. They then put their shoes back on at play time. I love that! It means the children are comfortable at school, and they also gain confidence in dressing themselves and changing shoes quickly.

Children as young as three are using computers and tablets at school here. Beanie does. It gives them skills they will probably require in their future studies and careers. At the same time, I cannot help but think that a lot of them might already be spending lots of time sitting in front of screens, whether it be a television, apps on their parents’ phones, educational activities on a computer, video games or films on a tablet. During their time at school in France, Crevette and Beanie did not go anywhere near a computer. In fact, the boards in all the classrooms were chalkboards. 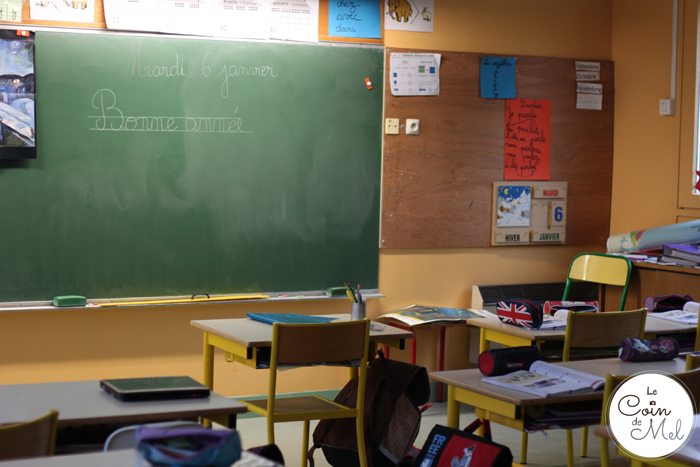 Crevette had his own little desk, with a hook on the side for his bag and a compartment under the table to store his books. We had the same desks when I was at school. 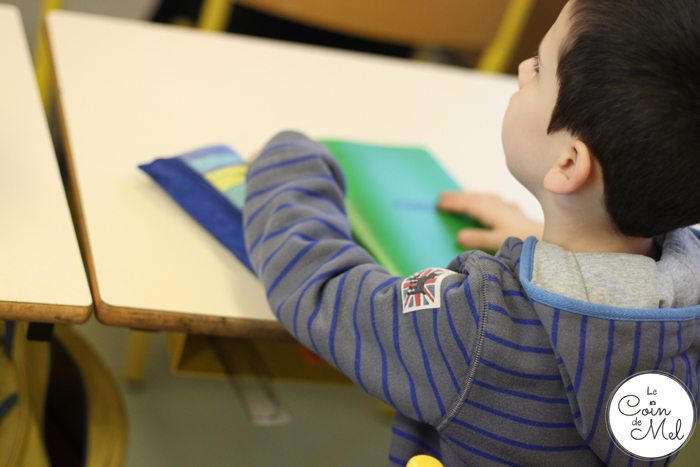 At nursery level, a carousel system was in place. The children were in groups, going from one activity or game to the other in an organised manner. Wandering from one table to another without permission was not an option and most children respected that rule. They also had a set playtime outside every day as well as a singing session. The activities Beanie enjoyed the most were singing, playing games, reproducing patterns, drawing, focusing on curved lines, cooking, making a salt dough pie.

In England, children stay at school for lunch. In France, the children had one hour and forty-five minutes between the morning and afternoon sessions. A large number of children were going home to eat a warm meal with their parents or childminders.

When I told the French school children I only had approximately 30 minutes for my lunch at work and asked them what they thought I ate, they answered things like:

“Just a starter and a main course?”

“A main course and dessert only?”

“Only a piece of cheese and dessert?”

I replied that all I had time for was a sandwich and a piece of fruit or microwaved leftovers and they looked at me with pity. This sums up how important food is to the French, from a very young age. I love it!

For her first afternoon session, Beanie was not impressed when she was told she had to lie down. She has not napped since she was three years old! After a lot of moaning and tears, she got comfortable on one of the small camp beds that had been set up in the cloak room. The children all snuggled up with pillows and duvets whilst a story was read to them. I fondly remember napping at school myself and loving it! Who is with me for a petition to make naps compulsory in schools and at work?

Staff members were as lovely in my mum’s village as they are at home, but teachers in France receive a lot less support and training to help children with additional needs than they do in England. There are very few teaching assistants as it takes a lot of paperwork and administrative procedures to get funding.

Overall, the atmosphere amongst the staff was very relaxed. In France, teachers are the ones in charge in their classrooms and there is no unnecessary scrutiny. They are there to share their knowledge with the children and the little ones are there to listen and learn. It seems a lot less complicated in France than it is at home.

When I leaf through my little man’s books from Year 1 in England, it all looks pretty amazing. Progress is obvious and there is an impressive amount of feedback there, but it seems like teachers work incredibly hard, possibly harder than the children, judging by the number of worksheets, stickers and comments in his exercise books.

In France, the onus is on reading, writing, spelling and numeracy so that the children acquire a certain confidence in these basic skills. There is one standardised way of joined-up writing (cursive), leading to a rigorous approach.

I have to say there was a lot of homework and pressure for my little man. On Fridays, he was given a list of words and a sentence to learn for his dictation the following Tuesday. He also had some reading to do, poetry to learn as well as numeracy. This is how I was educated. To me, it gives the children structure as well as a good work ethic for the future. It may seem archaic to some, but this traditional education, based on grammar, practising verb endings, learning classic poems on a regular basis, focusing on neat handwriting with correct spellings provide good grounds for  writing accurately in their own language. 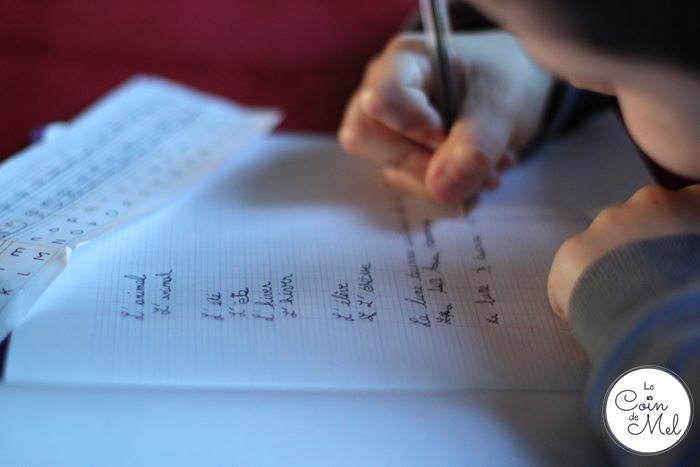 What are Parents Saying?

In the past few weeks, I have tried to pay more attention to the last thing parents were saying to their children as they were dropping them off to school.

At pick up time, the questions I overheard from parents were also different.

England: “What did you do today?”

Final Observations as a Mum, French Teacher in England and Volunteer as an English Teacher in France:

The general attitude towards education is very different in France and England I think. In France, lessons tend to be teacher-led. Children learn grammar from a very young age; they learn how to write using the cursive model. They greet staff before they start a conversation with them or ask a question. They learn by heart and their ability to spell is tested weekly.

I know this might sound a little rigid but although it is traditional, there is some flexibility. Teachers can choose how they deliver the curriculum. Responsibility for the children’s results in various tests and exams lies with the student, not the teacher.

True, some teachers can be labelled as ‘rubbish’, but at the end of the day, the teacher is not the one sitting the exam or receiving the result, and if a student is not confident in the teaching they receive, they are expected to buy a revision guide and work hard at home. No excuses are made. If you do not work hard enough, you will not pass and you can retake the year.

My youngest brother, who will be sitting his Bac (A-Levels) later this year, was told his Economics teacher might be off sick until the end of the year. There was no queue of students waiting to moan to the head teacher. The students, who will have to sit an exam in June, were told they had better buy a study guide and keep working.

What did my Children Think?

Crevette: “Great. I like meeting different children and making friends. I love doing Maths in French. We had our own tables. Instead of a whiteboard we had a blackboard.”

Beanie: “I don’t like it. They speak French. It’s too hard.”

Would you rather your children went to school in France or in England?