This week has been all about Jumpy’s allergies. On Tuesday, she had some more skin prick tests, and I felt light-hearted as her previous tests and subsequent milk challenge confirmed she had grown out of her milk protein allergy.

When we arrived at the hospital, Jumpy was not in the mood for being poked and she put on a fight, but the nurse eventually managed to carry out the tests. Raw egg caused the biggest bump, and it did not disappear until later that night, but that was no surprise as she had failed the baked egg challenge in hospital a few months ago. All the other bumps, indicating a reaction to wheat and all nuts, were smaller. They were there, but they were smaller. That is positive, and I am clinging on to that!

The following day, I attended a first aid course at my local children’s centre. The emphasis was on trying to resuscitate a child who had stopped breathing. I practised giving CPR to a baby and a child (on mannequins!) and I now feel more confident with the procedure.

All of this made me think about what could happen to Jumpy. When I took her to A&E with what I knew was an allergic reaction, she was only six months old. Her eyes so swollen she could not open them. Her lips, fingers and toes looked like they had been inflated and were about to burst. Her whole body was covered in hives. She was wheezing. To this day, it is the scariest event I have experienced as a parent.

I now know exactly what to do in case of a severe allergic reaction, but I would like anyone who comes in contact with my little girl to be able to spot the signs of anaphylaxis and have the confidence to follow her action plan, use her Epipen or perform CPR if need be. 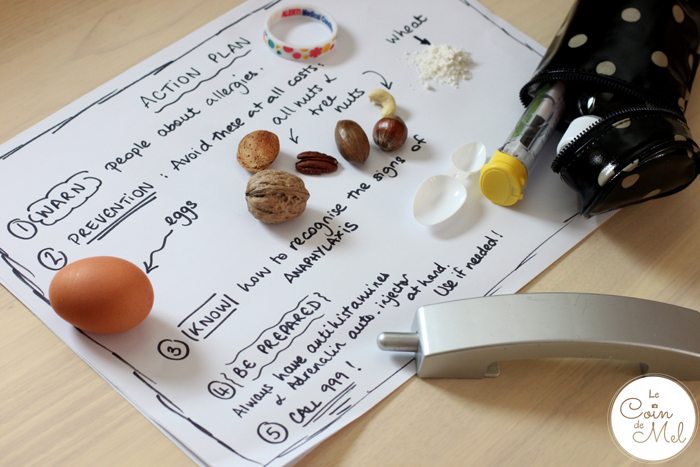 There are dozens of known allergens that can cause unpleasant symptoms in children. However, there are some reactions that have the potential to be life-threatening, unless urgent medical intervention is sought. A severe reaction – usually caused by an insect sting, a type of medication or food – could be anaphylaxis, which requires swift intervention if a child is to make a quick and full recovery. If your child suffers from allergies, knowing the warning signs of anaphylaxis is crucial.

Anaphylaxis occurs when the body reacts to the presence of a triggering allergen. However, it is not the allergen that is directly responsible for the symptoms of anaphylaxis, rather the enormous amounts of histamine and various other chemicals that the body releases into the bloodstream. The human body treats allergens as ‘invaders’ – in the same way it would treat a virus or bacteria. It is the histamine released by the body that can trigger inflammatory symptoms, and these symptoms can become severe in some children.

What Are the Signs of Anaphylaxis?

Identifying anaphylaxis in infants is not easy, as you cannot communicate effectively with them in order to get details about the symptoms. There are some tell-tale signs that a baby is suffering from anaphylaxis, however. During the early stages of an attack, your child may be suffering from one or all of them.

The later stages of anaphylaxis can include fainting and a lapse into unconsciousness. This could be a sign of anaphylactic shock, in which case urgent medical assistance will be required. It is also vital that your child is tested for the full range of allergies if you suspect she is a sufferer.

If you child is asthmatic, or if she suffers from atopic eczema, she could be at a heightened risk of anaphylaxis, so it’s vital that you take the initiative and have her screened by specialists. Allergy testing will provide you with detailed information on the foods and substances to avoid, and the severity of your child’s condition. Your child may also be issued with an adrenaline pen, which can be used to provide emergency treatment in the event of a severe anaphylactic episode.

What Should You Do if Your Child Goes into Anaphylactic Shock?

If your child is having trouble breathing, or has lost consciousness, you should call an ambulance straight away. Your child may be gasping for air, which might make you panic. However, it is very important that you remain calm, as your panic might be sensed by your child – exacerbating her breathing problems. If you know what triggered the attack, remove it immediately. This might mean removing a bee sting or wiping food away from her mouth.

In some rare cases, children who go into anaphylactic shock will lose consciousness. If this happens, you should place your child in the recovery position, which involves lying her on her side and using her arm and leg for support. You should also tilt her head so her airway is completely opened. Continue to monitor your child’s breathing until an ambulance arrives. If she stops breathing, or if her heart stops, you should administer a form of cardiopulmonary resuscitation (CPR) – specifically for young children.

Anaphylaxis is rare, but it is on the increase in the Western world. The key to successful management and treatment of the condition is to have your child screened for allergies at a leading children’s hospital, and to prepare in advance for the onset of an anaphylactic episode.