Have you been to Great Missenden? Well, I had never heard of the picturesque village until last Saturday.

My friend Loraine and I wanted to take our children out for the day. We have seven children aged 11 months to seven years old between us. We took a chance when we decided to deviate from our usual afternoon in the park where they can run around, argue, be friends again and scream at the top of their lungs.

Since our older two are really into Matilda, we opted for the Roald Dahl museum in Great Missenden (Buckinghamshire). Crevette and I had tried reading a few books together but although he loves me reading to him, he had never loved a book enough to choose to read to himself. That was until we started reading Matilda together, and he could not put the book down. He started reading on his own, lying on his tummy, feet up, concentration unfaltering for a couple of hours.

That was a huge milestone, and it reminded me of my own childhood. The first chapter book I ever read for pleasure was Charlie and the Chocolate Factory. I chose it in the school library randomly if I remember well. I got ‘lost in the story’ after only a few pages, and I read a few other Roald Dahl books after that.

Great Missenden is the place where Roald Dahl’s stories were born, where his characters took shape, where he made up nonsense words that made so much sense. Roald Dahl had a routine. It was rather rigid, but it worked for him. Every day, he would wake up at the same time, take the children to school, sit on this chair in his shed, and he would work on his books. His children were not allowed in there, and they did not come near… as Roald had told them there were monsters in there.

It is one of the best museums I have ever been to. It is not pretentious, overly ‘singing and dancing’ or filled with technology to compensate for a lack of interesting artefacts to display. Quite the contrary! The Roald Dahl museum focuses on simple things like taking notes to record your creative ideas, collecting photos from magazines to get inspiration for a character, dressing up. The children were welcome to touch the displays, dress up and have fun. You will be pleased to know that Crevette is taller than an Oompa Loompa, and almost as tall as Matilda!

The children were also encouraged to be inquisitive, to look for clues, to be detectives, through the museum’s ‘Twit Trickster Trail’. They were also given a pencil and a ‘Story Ideas Book’. Parents were not left out. We were given a ‘Gloriumptious Guide,’ containing forty things to discover and do in the museum.

It is traditional. It is also colourful, filled with wit, objects that belonged to Roald Dahl and stories about the author’s personality and mischievous nature. Every corner of the museum is brimming with ideas that could spark visitors’ imagination and creativity. There are costumes in every room, so our younger children could dress up and just enjoy being little whilst the rest of us were genuinely interested in the life and works of Roald Dahl. 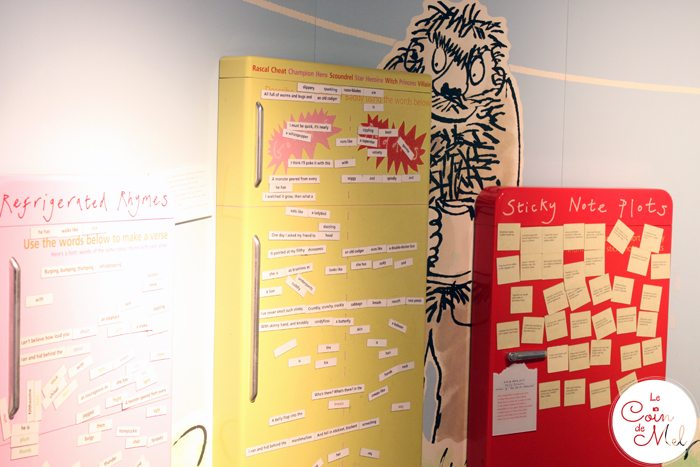 It is all about acting things out, playing pranks on people, dressing up, creating a persona, being fun, creative and thinking out of the box,. After all, it should be what life is about: enjoying the little things. It really is a place for children of all ages, even 35 year old ones.

Even in Café Twit, “the place for scrumdiddlyumptious food and drink”, Roald Dahl’s voice could be heard, through the names of the cakes and food. You could have SandWitches, BFG cookies, Whizzpopper or Swishwiffler. When I told the staff at the café I was a food blogger and asked them whether I could take photos of their goodies, they immediately accepted. They did not seem so keen when I invaded their space and started moving everything around, to find out my lens was not focusing. They were incredibly patient and friendly although I was disrupting their routine. I got myself some coffee cake after that and it was out of this world.

After that, I found out about a competition the museum was organising for their 10th birthday party on 13th June 2015. They were challenging us to create a cake for the occasion. Definitely my kind of challenge!

Just before we left, we headed over to Miss Honey’s classroom for a story, and people in the audience were very much involved. Beanie loved screwing her face to pretend she was a grumpy old grandma. Our host displayed excellent acting skills and managed to get the whole audience including mums, dads, and grandparents. Even my baby and toddler were squealing with delight. We all enjoyed booing the big bad wolf. 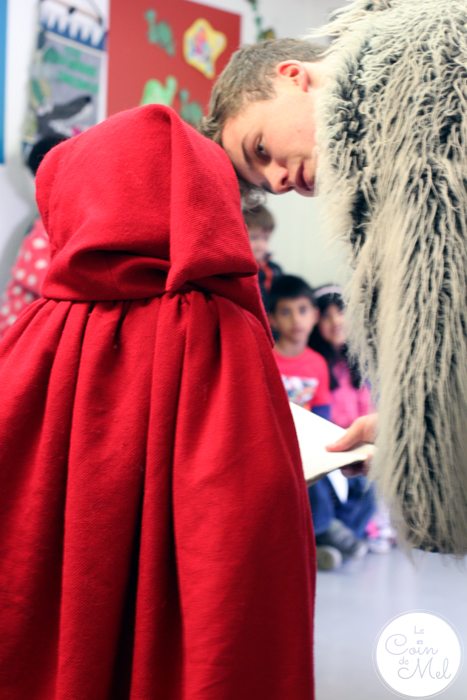 After spending about an hour chatting with Loraine in the car park, she offered to take my little ones home with her. She could fit a couple in her car, so Crevette and Beanie had an impromptu play date, to their sheer delight. I went home with half of my crew, and they were both fast asleep by the time we had left Great Missenden.

We all had a great time, from baby to grown mummies. If you have not been to Great Missenden yet, I highly recommend you do. It is really worth the money. Children under 5 go for free.  I paid £6.60 for my ticket and £4.40 for Crevette (Children 5 to 18).

Roald Dahl was drawing inspiration from everyday things, events or people and the museum encouraged us to do the same. I decided to develop a cake recipe that would be worthy of his stories. It would be inspired by my children, these four gorgeous yet different human beings.

Would I go to Great Missenden again? In a flash!

Previous Post: « Paul McCartney Live: What a Legend!
Next Post: Wangle Buzzing Cake (& a ‘Free From’ one at that!) »