Tommee Tippee sent us a Sangenic nappy bin for the launch of their limited edition blue and pink nappy disposal systems.

My Expectations
Wriggly is my fourth baby and before I received the Sangenic, I had never considered using a nappy disposal system other than throwing the nappies away in our wheelie bin.
To be 100% honest, I thought I would not like it.
I imagined I was going to receive a huge contraption with a complicated mechanism.
I expected it to get smelly. If you are lucky enough to have been anywhere near my girls post number two, you know what I mean!
I thought it would be an eye sore.
I could see myself trying it for this review and then passing it on to whoever would want it.

The Reality
It is much (much) smaller than I anticipated! I imagined it would be as big as my kitchen bin and incredibly cumbersome, but it is not! Tick! It is in fact not much bigger than my bathroom bin.
I got really excited when I received it and it looked better than I thought (the little things in life, hey!) so I decided to use it straight away, even though I had changed Wriggly’s nappy less than 30 minutes before (easily pleased, moi?).
It took me 1 minute 49 (I know, I timed myself!) to open the box, get the Sangenic out and read the instructions to realise it was all ready to use. It is such a simple yet clever gadget!
It fits where my normal bin used to. The Sangenic can be used for nappies and bathroom stuff for now. The tub is supposed to hold twenty-eight nappies, but I had doubts about the claims it would stay odour free.
When asked what colour I wanted, I went for the baby blue one to match my bathroom colour scheme (blue and yellow).
Before I put my first nappy in, I compared its size to my baby in the name of ahem, Science (ok, maybe not) and you can see it is much smaller than my chubby four months old baby. 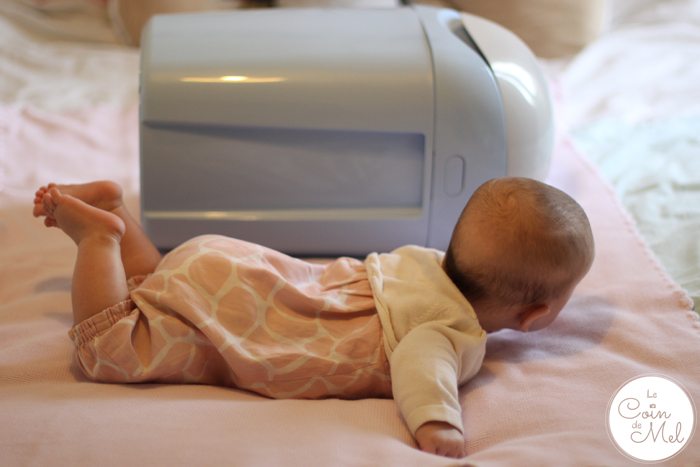 I was so dubious about the lack of odour that I decided to write down how many nappies we could fit in one load and how long it would work.
I emptied the bin for the first time after two days, and I kid you not: it did not smell. Just in case you did not get it: I could NOT smell the ten pees and eight poos that were in there. 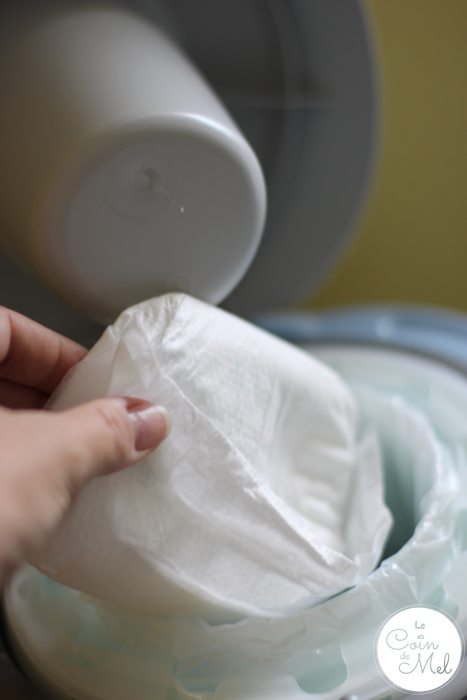 You basically put your nappy (and in our case any other bathroom rubbish) in the bin, then turn the handle. It twists and wraps the nappy like a sausage to isolate it from the rest. When the bin is full, you simply cut the film using the integrated cutter, tie a knot and you can empty the bin and keep using the same cassette.
I asked Crevette whether he wanted to try the bin. I have never seen him put Minecraft on hold that quickly. At this point, let me add that my son is not normally a bin enthusiast. He only got excited about it after I explained there was a turning mechanism. After that, he tried finding stuff to put in the bin so he could operate it again.

Conclusion: Worth it or Not?
I am well and truly impressed!
Bye bye old bin, hello Sangenic! It has now been re-located to the cupboard that houses the old vacuum cleaner, a potty and the bucket for washable nappies.
I cannot believe I have been putting one nappy after another in the bin outside rather than getting this handy little gadget. Sometimes, you just have to make your life easier!
The refills are not cheap. I just checked on Amazon and you can get three for £10 (it gets cheaper if you buy them in bulk), but I genuinely think it is a great product. That will save us trips to the bin.
I ordered three refills from Amazon the day after I first tried it and Hubby approved. 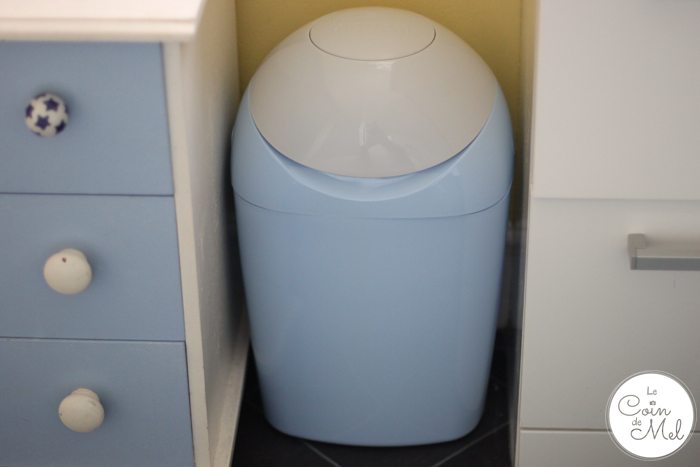 Disclosure:
I was sent the Sangenic Nappy Disposal System with two cassettes for the purpose of this review and no payment was received. All opinions and photographs are my own.