Jumpy turned four on Tuesday (how did that happen?) and today, we celebrated her birthday with our closest friends. We spent the day at Willows Farm having a great time together, picking pumpkins and learning a few fun facts.

If you live in or around London, I am pretty sure you have heard of Willows farm. We go regularly but I have to say the novelty never runs off because the farm is always ahead of the game with new shows and seasonal activities for the children.

Today was all about pumpkins and oh my goodness, the car park was overflowing when we got there. I thought it would take hours to get in, but there were enough tills open to keep visitors coming in quickly. As we already had our tickets (always book in advance!), we were shown in straight away.

We normally have a bit of a routine when we go to Willows, but today, we just followed the children’s lead. After a bit of merry-go-round action, they all jumped on the mini tractors whilst I was catching up with my friend Cé and cuddling her gorgeous baby girl. After lunch and birthday cake (of course!), we had a look at the animals and Crevette tackled the giant pumpkin-themed puzzle on his own before a bit of a rubber duck race and a walk. 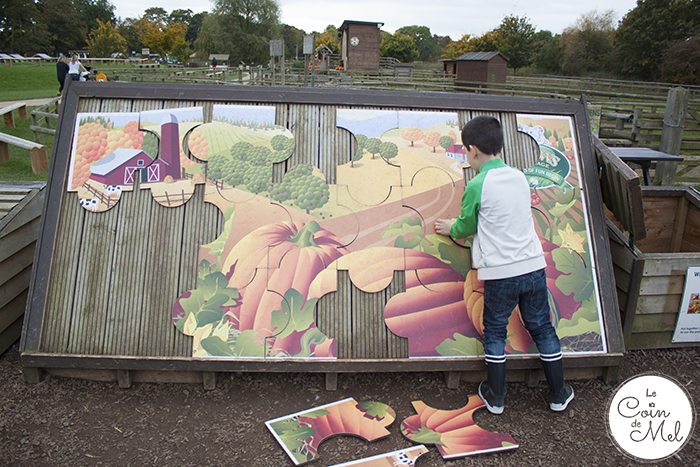 The highlight of our day was picking our pumpkins, which were included in the price of our tickets. The huge pumpkin patch meant we had plenty of choice and did not have to fight the crowds for a pumpkin. The children were torn. They struggled to choose their favourite pumpkins.

Crevette was adamant he would get the biggest pumpkin there and you know what? I think he found it. 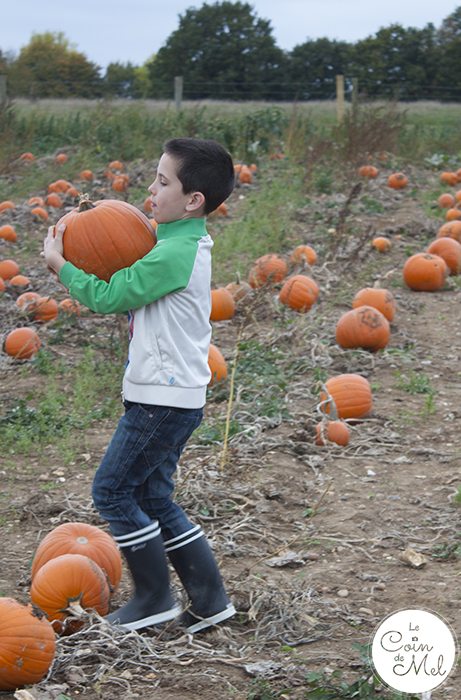 I was trying to get them to choose some little ones too because they were so cute! 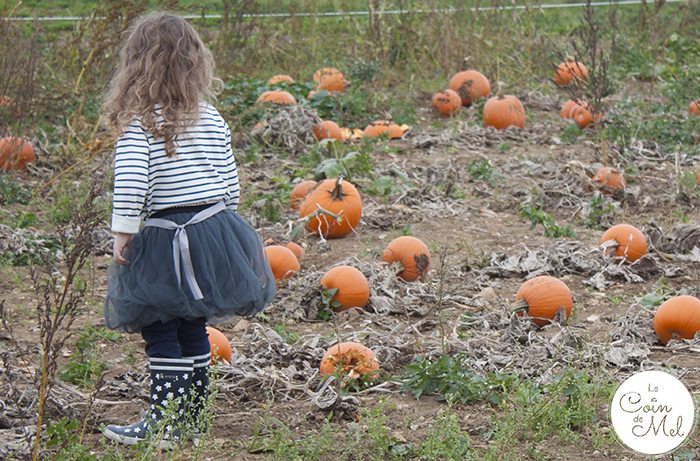 We went straight to the art and crafts tent where the children did some colouring as we were waiting for a table to carve our pumpkins. 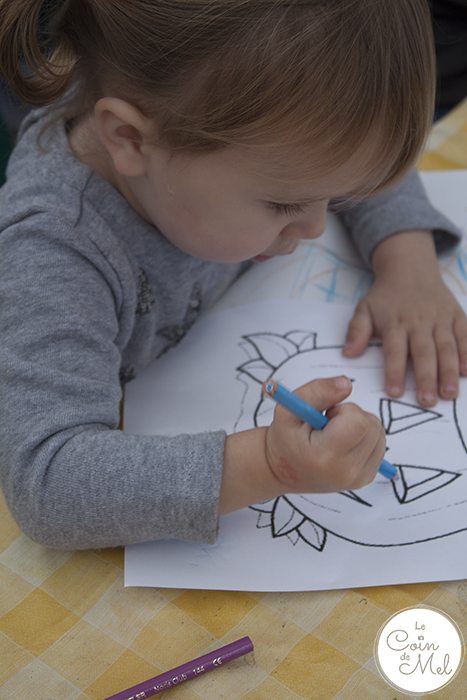 The fact the tops were taken off for us really saved a lot of time and carving the pumpkins there and then meant we would not make a mess at home. Win, win! 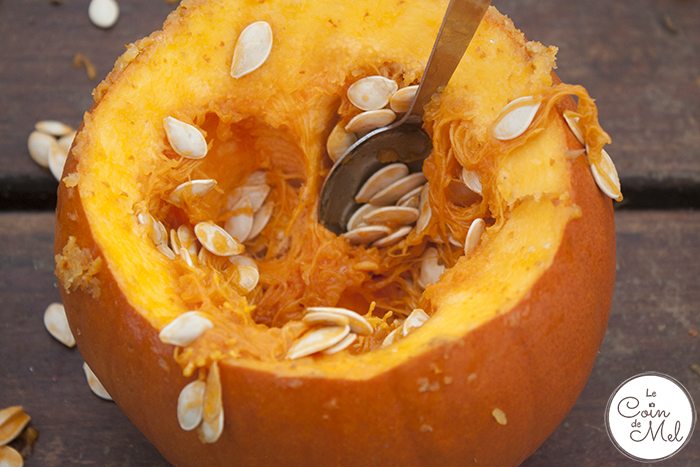 Beanie loved getting messy and scooping out pumpkin flesh with her hands (arms?). 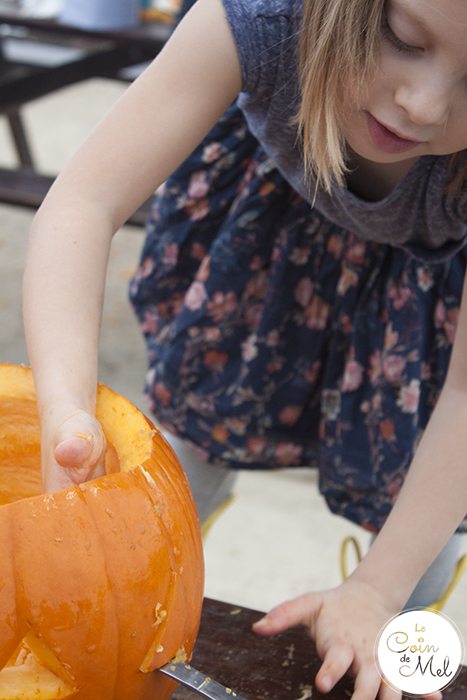 Crevette carefully carved eyes, nose and mouth, with a little help from Cé. 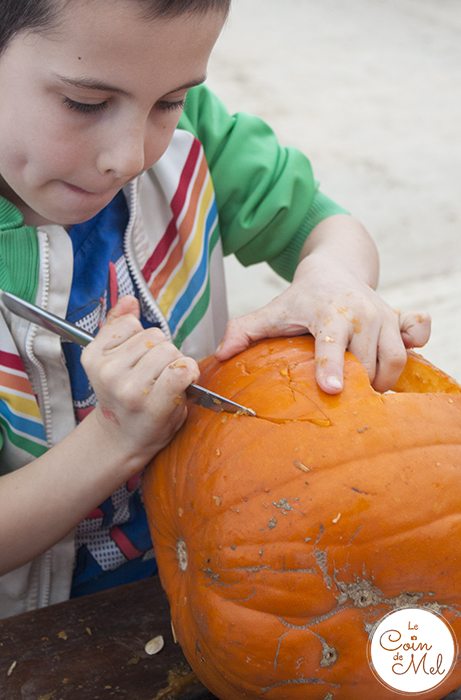 Pumpkin facts were displayed all around the farm and it got me interested so I did a bit of research when I got home and found out a few facts that children might find interesting too.

1- Pumpkin is a fruit because it contains seeds, but it is usually referred to as a vegetable.

3- It is Christopher Columbus who introduced pumpkin seeds to Europe when he came back from America.

4- Pumpkins are normally orange but can sometimes be yellow, white, green or red.

5- The ‘jack-o-lantern’ tradition could have come from Ireland, where they used to carve faces into root vegetables like turnips as part of the pagan festival of Samhain to mark the end of the harvest season.

7- You can eat pumpkin flowers.

Have you got any fun facts about pumpkins?

After all that excitement, we headed towards the ‘Woolly Jumpers indoor play barn’ where the children had the time of their lives, screaming with delight as they were going down the slides, running after each other and coming to us for snacks and water. We spent a couple of hours chatting, drinking tea and coffee and taste-testing the pumpkin muffins from the café (would have been rude not to!).

Here is the recipe from Willows Farm’s Facebook page if you fancy it:

We left as the farm was closing and waved goodbye to the pumpkin face straw bales as we drove off. 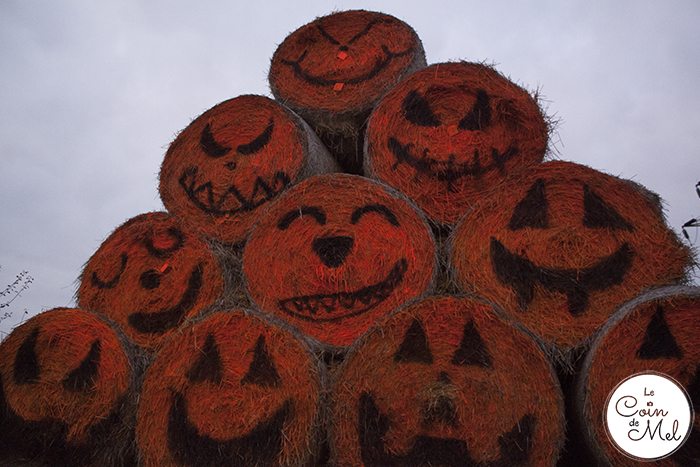 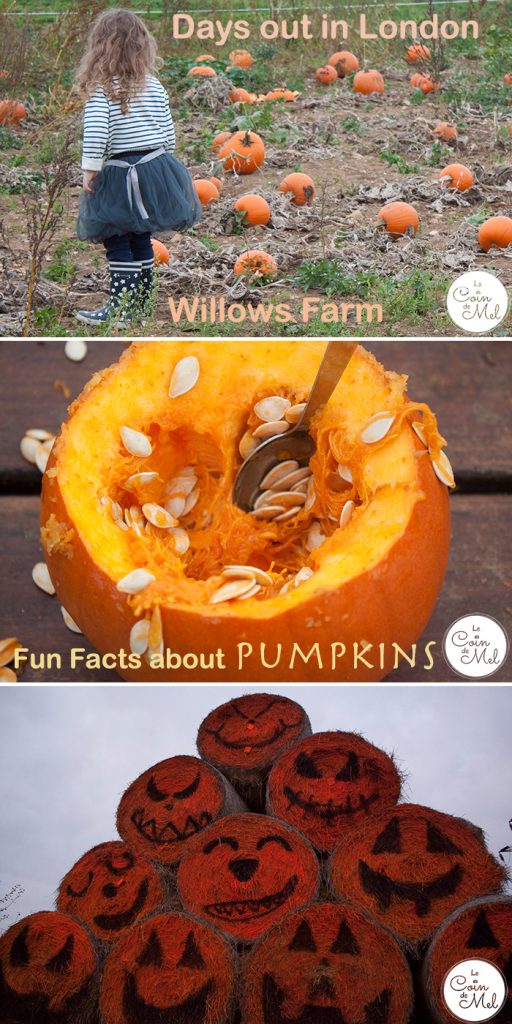 Disclosure: We were gifted tickets free of charge, but I paid for our friends’ tickets and Cé treated us to warm drinks and muffins. All opinions and photos are my own.

Previous Post: « Top Tips for a Brilliant Day at Chessington World of Adventures
Next Post: Why You Should Have a Teal Pumpkin for Halloween »