Home » Uncategorized » Kids' Corner » Would you Know What to Do in Case of an Emergency? Free Baby & Child First Aid App by the British Red Cross

Is first aid a skill you want to learn? Have you not yet found the time to attend a course? That was me, before that fatal night when I thought my baby might die in my arms…

When I realised Jumpy was covered in hives at just 6 months old, I had no idea what was happening. Shortly after, she started swelling, so much so that ten minutes later, she could not open her eyes. I knew straight away she was having an allergic reaction but I did not know what to do. I went into ‘automatic mode’ and drove her to A&E.

As soon as I was in the car, I realised I had made a foolish decision. I could not check on her. She was at the back of the Mini in her rear-facing seat and I was driving. She was too young to tell me she was fine.  She was not crying and I could not hear a sound coming from the back. What if her tongue had swollen so much she had choked? What if she was unconscious?

It was without the shadow of a doubt the longest four minute drive of my life. I did not do the right thing. I should have called 999. I could not describe the horror that engulfed me when I realised I could not check on my baby until I had parked the car at the hospital.

Since then, I have attended a couple of first aid courses. Those courses are invaluable because they are not all about the theory; they are about putting it all into practice. Repeating gestures again and again makes them second nature. That, to me, is important, because if anything happened to anyone in front of me, I would want to be able to recall what I am supposed to do rather than panic about the situation.

I really believe everyone should attend first aid courses, not just paramedics, first aiders or medical professionals, but everyone. First aid should be compulsory at school. Can you imagine anything happening to your child or someone else’s and not be able to do anything, simply because you had no idea what to do? I could not live with that.

With four children seven and under, no matter how vigilant I may be, there is always a possibility my children might hurt themselves and I want to make sure I am fully prepared for every eventuality. Avoiding accidents or injuries is always better than having to treat them, but small children fall over, hurt themselves occasionally, whether we as parents are with them or not. I feel responsible for the safety of my children, but I would also be reassured if everyone around them feel confident enough to take action should anything happen to them.

Doing nothing is the worst you can do. If Crevette burnt his hand during a sleepover, I would want his friends’ parents to make sure they keep his hand under running cold water for at least ten minutes before they even considered calling me. 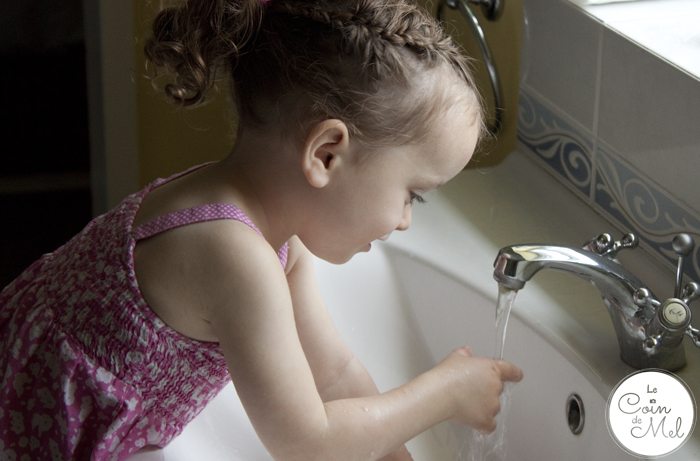 If Jumpy had an allergic reaction and was struggling to breathe, I would like the friend looking after her to use her adrenalin auto-injector then call for an ambulance before they called me.

I have handbooks from the first aid courses I attended. They are full of useful information on what to do should anything happen but I tend not to carry them around. My phone, however, is always in my handbag.

I see the British Red Cross as a source of reliable and convenient First Aid advice, so when I found out about their free Baby and Child First Aid app, I downloaded it in a heartbeat.

Here is a bit of background information about the app:

“Parents and carers: help is at hand. If your child chokes on a sweet or suffers a nasty cut, you’ll only be a few clicks away from knowing exactly what to do. This free app is packed with useful videos, animations and tips. It provides simple and easy advice, and each skill only takes minutes to learn. You can test your knowledge using the built in first aid quizzes. There is also a handy device to record your child’s medication needs and any allergies.”

I wish I had had the app before! As soon as you open it, it is set to show you the ‘Emergency’ section, with common ailments such as allergic reaction, asthma, bleeding, burns, choking, fever, vomiting etc. It is really clear, with an illustration accompanying the word, and organised in alphabetical order. 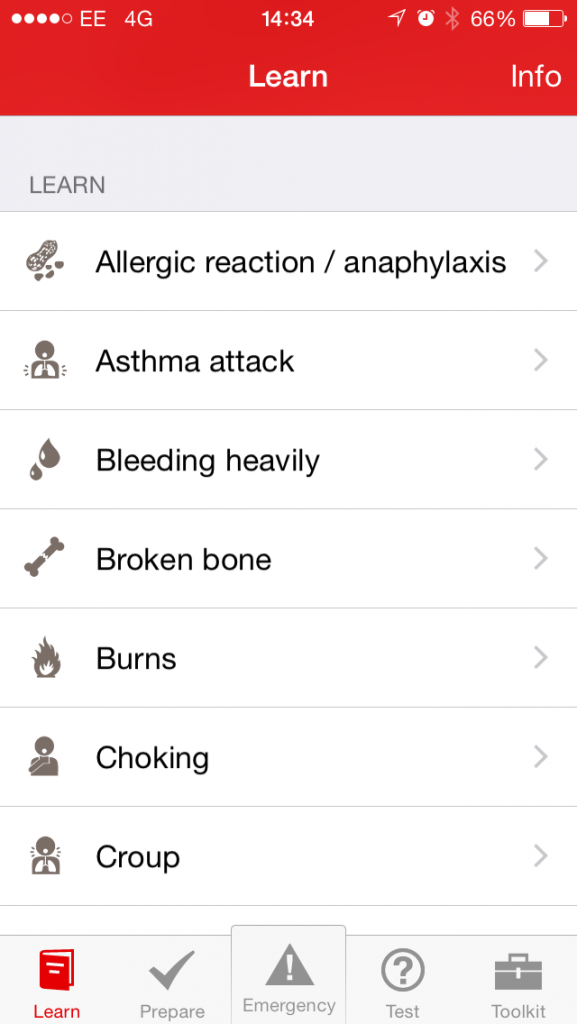 Each section is clearly laid out, with a short video, quick description of the ailment or condition, steps to follow, related first aid as well as questions and answers. 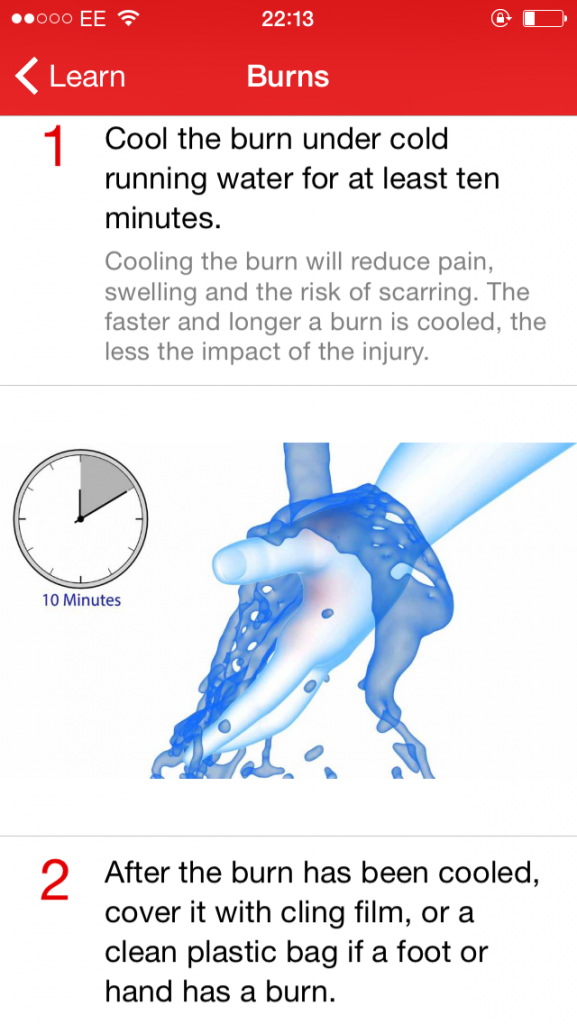 It covers even the most basic of questions, formulated simply like: “If I’m looking after a child with a known allergy and they have their own auto-injector, can I use the injector if they suffer a severe allergic reaction?” Yes, yes and yes! It is not too wordy or complicated; just what you need in an emergency situation. 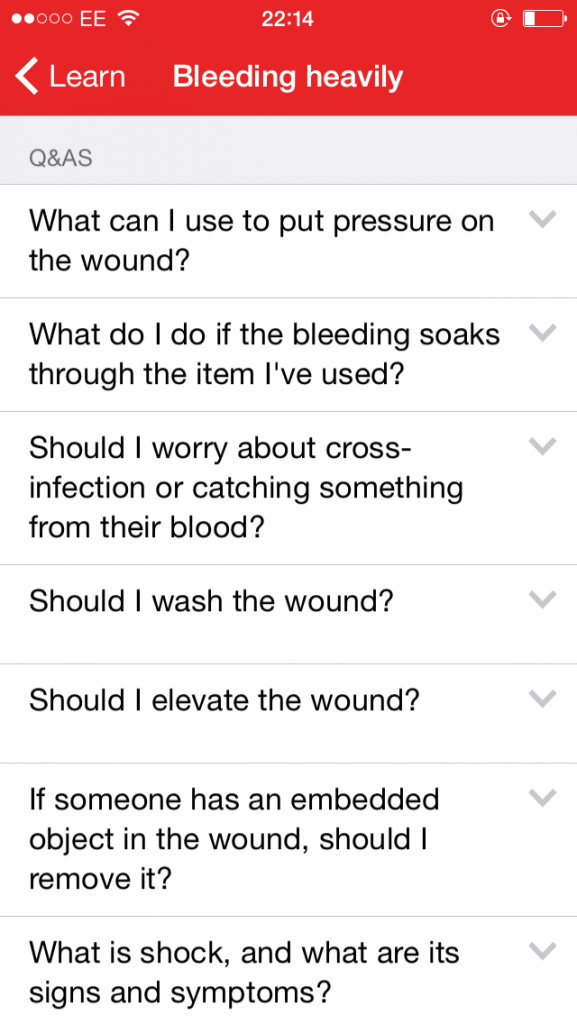 Here are the kinds of questions the app can answer for you:

Check this rap video by the British Red Cross about poison:

I really love the free app. I urge every single person who reads this post to download it. It could save lives. I think the app is the tool anyone should have on their phone, in conjunction with attending a first aid course.

I asked Hubby to have a look at the app and let me know what he thought. Here is what he said: “I like to have the information on tap all the time. It’s nice to have it there rather than having to Google the symptoms. It gives you a sequence of events and outcomes. You know what to do next, how to relieve the symptoms and when to call an ambulance.”

We then looked at the section on asthma attacks with my friend Solène who is studying to become a pharmacist. She found the app brilliant. All she would improve would be to include a clear description of the procedure for administering the medication to relieve the symptoms (e.g. asthma, allergic reaction), but I guess these would be at hand with the medication needed.

Disclosure: This post is sponsored by The British Red Cross but all opinions and photos are my own.